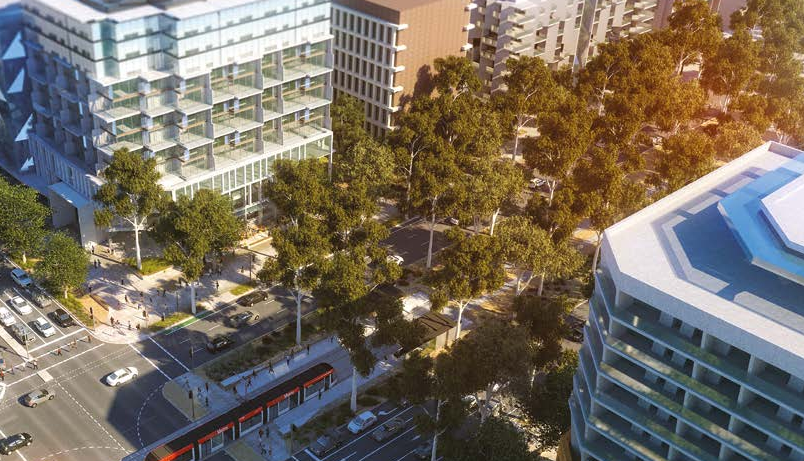 The Northbourne corridor to come: the ACT Parents and Citizens Association says a vertical school may be needed in the crowded light rail area. File photo.

The ACT Parents and Citizens Association has suggested that ‘going up’ might be a solution to a lack of space for a new primary school in the growing Northbourne corridor.

The idea of building a multi-storey or vertical school was floated in a Budget submission as part of lobbying for more schools to be built to cater for projected population increases in Gungahlin, central Belconnen and the Inner North, with the latter two being transformed by densification.

“Development along the tram corridor is expected to place further strain on the capacity of these schools within the next few years,” it said, recommending the ACT Government acquire land to build a vertical school, close to and linked with existing open urban spaces including parks.

P&C spokesperson Janelle Kennard said the Association wanted to start a conversation about finding innovative approaches to overcoming the lack of space in the corridor and overcrowding.

“Let’s not be hamstrung by the existing way we think about schools,” she said.

While the Association did not have a fully fledged proposal or a concrete plan about how tall a building would be required, it knew of vertical schools around the world that managed to use space innovatively, including creating really interesting play spaces.

Ms Kennard said many parents also told the Association repeatedly that they wanted their children schooled near their workplaces, which was more possible with extra capacity.

She said the government plan for the Inner North and inner Belconnen was for more density. “That’s great, we’re a changing city, were growing up. We have to let that excitement and innovation around that growing city flow into our school planning,” she said.

“If there isn’t the space for a traditional flat school then that’s why it’s important to consider something that takes up less of a footprint.”

According to The Urban Developer website, the South Australian, Victorian, New South Wales and Queensland governments have all committed major funding to vertical schooling in their biggest cities.

Surry Hills High School is a $60 million project planned for completion in 2020 that will house 47 classrooms, a gymnasium and grassed rooftop that caters to 1200 new students.

The Queensland Government has announced a $500 million proposal for two new vertical schools in inner-city Brisbane by 2020.

In its Budget submission, the Parents and Citizens Association also urged the Government to build a new primary school in east Gungahlin, with current projections suggesting that the overall Gungahlin school population will double in the next 10 years, and in central Belconnen, where high-rise development is transforming the landscape and the population.

So long as there’s enough room for play grounds and sports facilities, then I don’t see a problem with going up.

They might as well go to school in a termite mound because that will likely be where their home is.

Ummmm most of the rest of the developed world does! Catch up!

Why do always centralise everything then complain about congestion. 🤔

Or we could, I don't know, reopen the schools which have been closed in recent years.

What about all the schools in the area that have been closed? Oh yes, they were on prime expensive land for the government to sell at a profit. This Barr government is a joke.

It’s a pretty poor excuse for all the ground Australia has available.

No it's different and so it's wrong.

Geez, it's not as if they're proposing a building with no windows... Heaps of schools are in big buildings and kids turn out fine.

No. Children's play and sport and PE space and fresh air should not be compromised because of endless urban density. They'll likely spend enough time in office blocks when older.

Radical idea. They could ride their bike to school, like children used to do in the past, when there were no bike paths at all. Exercise and outside.

Julie Macklin Nah!! Some parents are too helicopter to even let their little unicorns travel on those nasty old school buses

Another special idea as canberra has no space at all....😂

The old Downer Primary site next to the Downer sports oval would have made the perfect spot for a new school. It is central to all the overcrowded inner north schools. Instead they are going to build more units on it, for more kids to live in with no schools to go to.

Cass Proudfoot we need to protest strongly about this

500 new units coming in Watson too, but the population projection says that will only mean 10 more kids to the primary school, so no problem they say.

This may be the answer for high population density cities but not for our Canberra, known for its wide open spaces.

They have them in Europe

No. Kids need a playground.

Brisbane’s inner-city “vertical school” was a result of bad planning – no-one foresaw a boom in popularity for inner-city living when they closed down inner-city schools decades ago. In Canberra we have heaps of green space throughout the inner north and plenty of warning. Rather than putting these schoolchildren under fluorescent lights in an office tower type building, why not simply make the one-storey North Ainslie, Ainslie and Turner schools two-storey? That way all the children will be able to play outdoors over lunch and will be less likely to become obese. There’s every danger that the inner north will end up with a couple of “pov” under-resourced vertical slum schools under this plan. Affluent parents will prefer to send their kids to the “fresh air” schools.

No, children need light and air and easy access to the outside and nature. They are not office workers.

I went to a school bang in the middle of the Sydney CBD and turned out fine... I think!

We had a rooftop playground, which surprisingly had fresh air. Plus, our playground was the city, we got to learn the ins and outs of the Sydney CBD during our lunch breaks. It was a lot of fun!

Jason Hutty - 1 hour ago
Tim Van Der Vlist I'm not sure if you understand the economics of a member's club. The members own it. So yes, of course they... View
John Sands - 3 hours ago
John Ryan Steve Boege just means you should go to 19th hole and think about how you would have played... View
Fiona Wright - 4 hours ago
Irene Kelly greenkeepers made a mistake on the greens (in the article).. View
Property 22

Mick Gaffey - 2 hours ago
Just buy it already Jason Barton ✅ View
Amanda Sanderson - 6 hours ago
I’ll give you bottomless gin and tonics Peter Taylor 🤣 View
John Sheil - 6 hours ago
Well I have known 2 licensees over the years and neither have achieved any success. May need a new business strategy.... View
Breaking 5

chewy14 - 3 hours ago
You're assuming what he's saying is correct though. Whilst they do have controls to prevent vaccine "shopping" for people not... View
HiddenDragon - 6 hours ago
John Moulis' experience illustrates a serious flaw in the vaccination program. With the "advice" (a rather dishonest way of d... View
Maya123 - 7 hours ago
I should add that my mother also had AstraZeneca, but had no symptoms. So it varies from person to person. View
News 21

nealg - 9 hours ago
Heavy truck traffic, lack of footpaths and e-scooters not a good mix for Mitchell. View
show more show less
*Results are based on activity within last 7 days

New road safety cameras on Northbourne Avenue and Barry Drive in the city have identified around 5000 motorists exceeding the...
Opinion 166

Motorists involved in collisions with vulnerable road users may face a specific charge and much stiffer penalties if convicted under...
Opinion 166

Oakwood offers unique residences at the foot of Mount Majura

@The_RiotACT @The_RiotACT
Find you're already stuck for ideas to entertain the kids over the school holidays? Look no further for inspiration, with workshops to tours and nighttime fun https://t.co/4Ey9eKhGEt (3 hours ago)

@The_RiotACT @The_RiotACT
There's a big week ahead in #Canberra with markets, music and comedy - there's something to please everyone https://t.co/wy6n8HbUv0 (4 hours ago)

@The_RiotACT @The_RiotACT
A new Auditor-General report has found teacher performance could not be adequately assessed as performance management has not been "implemented effectively" https://t.co/eyqWf1Q0IN (6 hours ago)