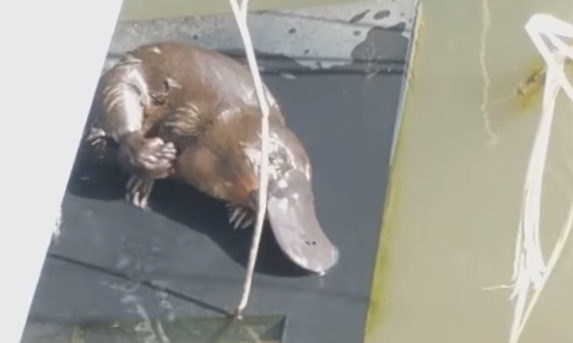 In a sight very few Canberrans would have ever seen, a lucky nature lover has captured footage of a happy platypus sunning and scratching himself at Tidbinbilla.

Canberra local Keighley Sutherland said she was wandering around Tidbinbilla Nature Reserve last Wednesday afternoon with her sister when she heard a noise coming from under the boardwalk.

“It was the weirdest thing,” she said. “I could hear something shuffling underneath the boardwalk but I thought it must have a been a duck. When I lent over the railing I saw this big platypus.

“Sometimes I see platypuses foraging in the dirt but I have never seen one rolling around like that. I was standing less than a metre above it as I was hanging over the bannister but it didn’t seem bothered at all.”

Waterwatch regional facilitator and ecologist Woo O’Reilly said platypuses groom themselves to keep mites from compromising the integrity of their fur.

“Platypuses are very big on grooming because they need to look after their fur in order to regulate their body temperature,” Ms O’Reilly said. “Mites from a platypus’ burrows can get into their fur so they need to groom to keep their fur healthy.

Happy platypus grooming himself at Tidbinbilla

Walking through Tidbinbilla Nature Reserve, Canberra local Keighley Sutherland couldn't believe her eyes when she saw a platypus scratching himself. Luckily, she captured the cute moment on video. According to an ecologist, platypuses groom themselves to keep mites from compromising the integrity of their fur.

Posted by The RiotACT on Monday, 23 September 2019

“It is so fundamental for them to keep their fur clean because they are a warm-blooded animal and it’s their fur that keeps them warm. If their fur gets compromised, they are in a lot of trouble.”

Ms O’Reilly also noted that all platypuses scratch and groom themselves with their back legs, much like canines.

“You’ll see that it was only using its back feet to scratch itself because they have very different shaped back feet compared to their front feet,” she shared. “The front feet are used for digging and swimming, but they used the curved claws on their back feet for grooming.

“They can get their back feet right up to their head to scratch around their bill.”

Ms O’Reilly, who runs the ACT Government’s Platypus Month during August, said she was pleased to see such a happy and healthy platypus in ACT waters after mixed sightings last month.

“From what I can tell from the video, he looked like a healthy and happy platypus,” she said with a laugh. “It definitely looked like he wasn’t struggling.”

Riley Helmling - 50 minutes ago
Peter Bee Using your excellent suggestion, Australia day would be moved to the 23rd March, 1804 when Matthew Flinders coined... View
Spiral - 4 hours ago
All cultures have good and bad aspects. Australia Day commemorates the event which ultimately led to the creation of our coun... View
Daniel Evans - 4 hours ago
It's about drinking beer, lamb on the Bbq and unwavering patriotism with national flags everywhere and hanging out doing all... View
Opinion 28

Margaret Freemantle - 4 hours ago
McKenzie needs to resign. Whilst Morrison is a dreadful PM, with the loss of his father, it would give him a little time to g... View
Tom Porter - 5 hours ago
Were they all approved by the Sports Commission? View
Helen Stephenson - 5 hours ago
Of course. They have punished the ACT for voting Labour! View
News 1

Member for Bega and NSW Transport Minister Andrew Constance has issued a plea to Canberrans to release vacant holiday homes to bushfire...
Opinion 28

What we know about declining platypus populations – it’s not much

@The_RiotACT @The_RiotACT
Celebrate everything #StarWars at one of the biggest burlesque events in the world at The Empire Strips Back at @canberratheatre on 31 Jan https://t.co/lXO0mw6r4t (46 minutes ago)

@The_RiotACT @The_RiotACT
RT @AHCPhoto: Today my son Thomas took this heartbreaking shot of a Kangaroo wiping the smoke/dust from its eyes whilst fire spreads out of… (2 hours ago)