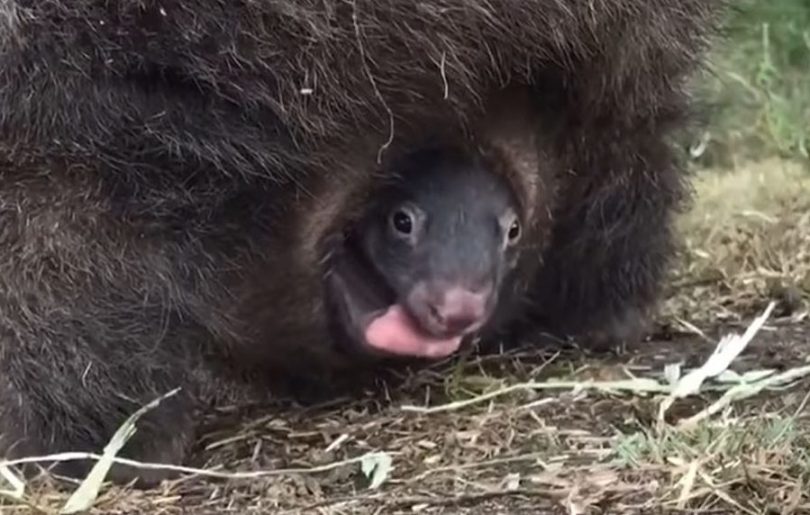 A rescued wombat released into the wild paid her carers a surprise visit recently to show off her first joey.

Valencia is named after Valencia Rise in Pambula, where she was found several years ago and was spotted by Cowsnest Wildlife Sanctuary volunteer Mark Fissenden.

Mark was recently leaving pellets out for the sanctuary’s kangaroos and Valencia scurried along to take advantage of a free feed.

While her head was burrowed in the bucket, Mark was given an amazing view of her firstborn in the pouch.

“We think Valencia was using her joey to distract us while she got a feed,” says Cowsnest Wildlife Sanctuary volunteer Anna Lindstrand with a laugh.

“Because Valencia was raised by humans, it’s easier for us to get close to her.”

Mark knew it was Valencia straight away because of her boisterous personality and enormous appetite.

“She’s always been quite forceful,” says Anna. “Even when she was little, she would put her whole body over a plate of food so no-one else could eat it.”

READ ALSO: Meet the residents of Australia’s most haunted house in Junee

However, Anna says it’s not that common for wombats to pay volunteers a visit so this was a real treat.

Valencia was raised by the sanctuary’s founder, Alexandra Seddon, and volunteers were thrilled to see the wombat doing so well.

The joey is Valencia’s firstborn and still doesn’t have a name. The sanctuary in Candelo is open to suggestions so you can send them a message on their Facebook page.

The video of Valencia and her joey reached a staggering 23 million views on Facebook, smashing the sanctuary’s previous record held by a whale.

It was a chance to throw the wonderful work the sanctuary volunteers do into the spotlight.

Cowsnest Wildlife Sanctuary was founded by Alexandra in 1989 and has rescued hundreds of native animals.

Alexandra also runs Potoroo Palace, in Merimbula, where members of the public can meet and learn about potoroo marsupials.

@the_riotact @The_RiotACT
Did you hear about the bloke who was bitten by a #white-tail spider and doctors had to amputate his leg? It probably didn't happen, but the #spider's fearsome reputation persists without a shred of evidence. Damien Larkins explains https://t.co/5I2pJBKyzw (26 minutes ago)