Experts in buying, selling & renting
Your property, your future
24 May 2021

25 May 2021 | Lottie Twyford
Start the conversation 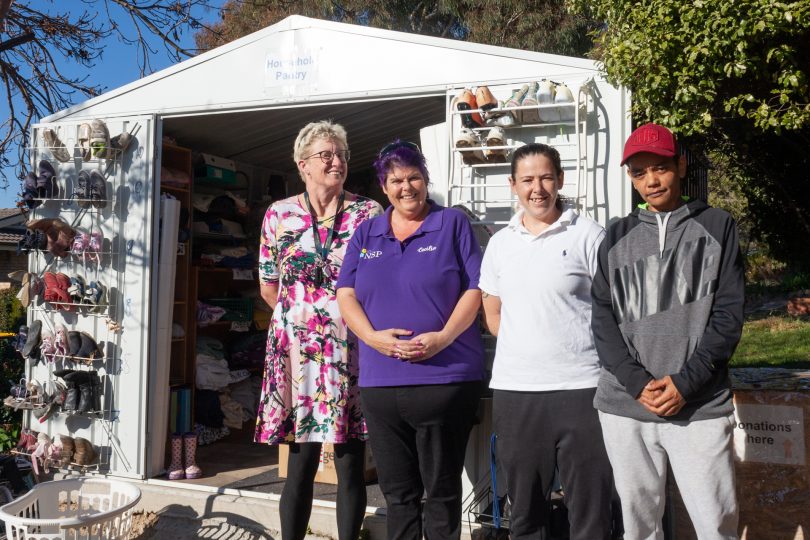 A group of residents in Gungahlin is putting their heads together and using their hearts to do what they can for Canberra’s homeless.

Ammie Barrett knows acutely what it’s like to be on the streets, having been homeless for 10 years, both in Queanbeyan and Canberra.

Now that she can, she’s turning her own experience into something positive.

She and her partner Geraldine have recently begun creating and distributing homeless care packs to those in need, containing sleeping bags, blankets, medicine, hygiene supplies and clothes.

“I tell you what, I would not like to be homeless these days. It’s got much harder and much unfriendlier to be out on the streets,” she said.

She says that when she and Geraldine head out to hand out the packs, they constantly hear stories of the homeless being moved along from central locations where they gather.

“In the city, there are cameras everywhere. The further out you get, the more vulnerable you become, especially if you can’t stay in a pack with others.

“People think only women and children are at risk, but a single male sleeping alone is not safe either,” she said.

Homeless Care Packs began when the couple saw a young bloke in the Gungahlin Town Centre who had absolutely nothing at all.

The pair simply couldn’t stand by and let him stay in the cold, so they bought him a sleeping bag and tent and gave him what they could.

“We’ve both experienced a lot of loss in our lives. We’ve buried brothers, aunties and mothers, and I personally have been in a really dark place before,” Ammie said.

Ammie’s own brother died after being released from prison and spending time on the streets.

But she credits these dark times with inspiring her to do what she can, now that she is able to.

Now in secure accommodation, she says she returns home every day grateful for both her warm bed and the roof they have over their head.

Ammie and Geraldine have partnered with the Ngunnawal Street Pantries, a completely community-run grassroots group with the motto of ‘give when you can, take when you need’.

According to Margaret McGrath, who runs the Clothes Pantry out of her own home, many people are only one missed paycheque away from becoming homeless.

It’s also a complex issue that is not solved by simply putting a roof over their heads. 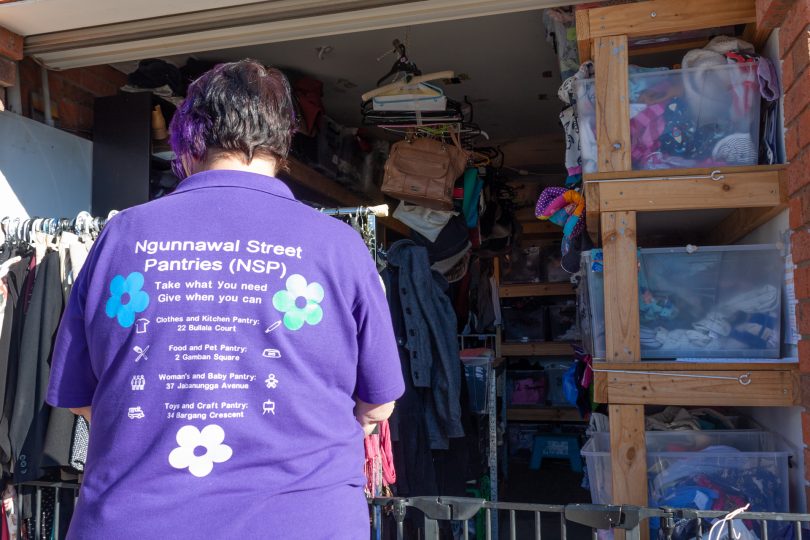 “Many people on the streets are there because of mental illness, or they’ve been recently released from incarceration, so they don’t have the life skills they need to provide for themselves,” she said.

NSP provides for the middle group – people who have homes but are struggling to make ends meet.

“All it takes is for a vet bill to crop up or for the kids to get sick and suddenly you’re struggling to put food on the table or pay the rent,” she said.

That’s where groups like NSP can really help, she explained.

“We also don’t have application processes or any forms that require filling in. It’s totally anonymous so anyone can feel comfortable using our services,” she said.

NSP is registered as a charity and has expanded to several locations across Gungahlin. There’s a food pantry, a men’s pantry, a toy pantry, a clothes and household pantry, as well as another independent women’s and baby pantry.

The dedication of this group of volunteers is clear.

Margaret has recently stepped down from the 70 hours she was previously giving to a “more manageable 40 to 50”.

The NSP community has big plans. They are hoping to create a safe ‘mental health hub’ where people can be taught skills like cooking, cleaning or job applications, as well as an area where people can have conversations and build community connections.

To find out more, or to get involved, visit Ngunnawal Street Pantries and Homeless Care Packs.

If you are homeless or at risk of homelessness, OneLink provides information and connections for support services in the ACT, including services for families and young people. OneLink is a service provided by Woden Community Service with assistance from the ACT Government. 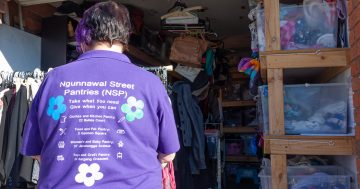