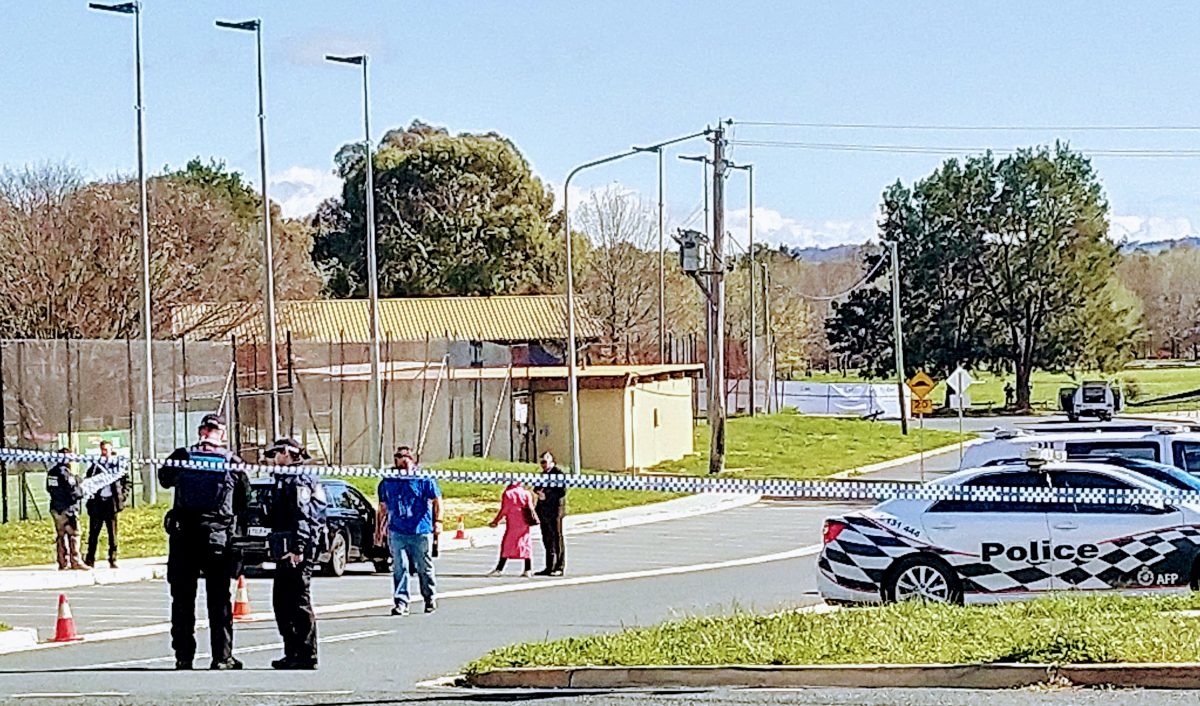 The scene of the police investigation at the skatepark at Weston in 2020. Photo: Michael Weaver.

At the sentencing of the teenager who stabbed a boy during the fatal brawl at the Weston Creek skatepark, the ACT chief justice said the issue of youths planning to meet up for fights was a problem in the Territory.

Earlier this year, a five-week jury trial resulted in the 17-year-old being acquitted of murdering an 18-year-old man during the fight on 27 September 2020.

The man was stabbed five times during the brawl, including once to the heart.

However, the teen did admit stabbing a 16-year-old boy in the back and on Tuesday (9 August), the ACT Supreme Court convicted him on a charge of recklessly inflicting grievous bodily harm.

He was sentenced to 13 months’ jail but the seven months he spent in custody on remand, as well as the strict conditions he faced on bail, were both taken into account.

The sentence was suspended immediately and backdated to cover the last 10 months, which means he was allowed to leave court that day but may have to serve three months if he breaches a two-year good behaviour order.

He has been on bail since June after the trial ended.

Chief Justice Lucy McCallum said the stabbing occurred during a fight in a public place and evidence at the teen’s trial showed violent, pre-organised fights among youths were a problem in Canberra.

She said on the night of the fight, the then-15-year-old had gone to a friend’s birthday party where he drank alcohol and took cannabis.

Two of his friends got into an argument over Snapchat with people he didn’t know, which escalated into an agreement to meet up for a fight at the skatepark and he was invited to go along.

Unbeknownst to him, a friend also asked adults to come along “in case sh-t goes south”.

After the three groups arrived in three cars at the skatepark, the adults went to the 18-year-old’s sports car and dragged him out while the teen’s friends got into a fight with the 16-year-old.

The teen said he struggled to get involved in the fight with his friends at first because they blocked his way to the 16-year-old, so he walked around the front of the sports car, spotted a knife on the ground and picked it up.

Chief Justice McCallum said it was likely the 18-year-old had been stabbed by an unknown person shortly before then.

The teen returned to the passenger’s side of the car and stabbed the 16-year-old in the back, leaving behind a long and deep gash.

He also stabbed into the sports car, believing he’d seen someone in there.

A boy who arrived with the two victims waved around a blunt machete, then the three adults returned to their car, grabbed garden tools and smashed the sports car.

The whole incident lasted about two minutes and 12 seconds.

When the boy was driving away he told one of his friends, “I think I stabbed the guy you were fighting”.

But he didn’t know someone had died until the next day when he saw media reports on the incident, so he threw the knife down a drain.

The teen claimed he stabbed his victim because he thought the 16-year-old was getting the better of his friend in the fight.

Chief Justice McCallum said there was evidence the 16-year-old had been left with a permanent scar and had stopped playing soccer originally due to the injuries he received.

She said while he didn’t realise he had been stabbed until he ran away from the brawl, the injury required hospital treatment and it did have a lasting impact.

But she said the use of the weapon was impulsive and unplanned. Also, she said the teen had ADHD and at the time of the fight had unfortunately stopped taking his medication.

It may be said that his mental health contributed to his offending, and if it was properly controlled, then he had reasonable prospects of good rehabilitation, she said.

She also accepted he was remorseful, although he could not express his remorse in an articulate way. The chance for him to re-enter the community must be given high priority, she said.

The court did hear he had gone on to commit more violence after the incident.

Chief Justice McCallum congratulated police for their efforts in this case, saying what must have been a distressing investigation was handled in a way that was “impeccable”.