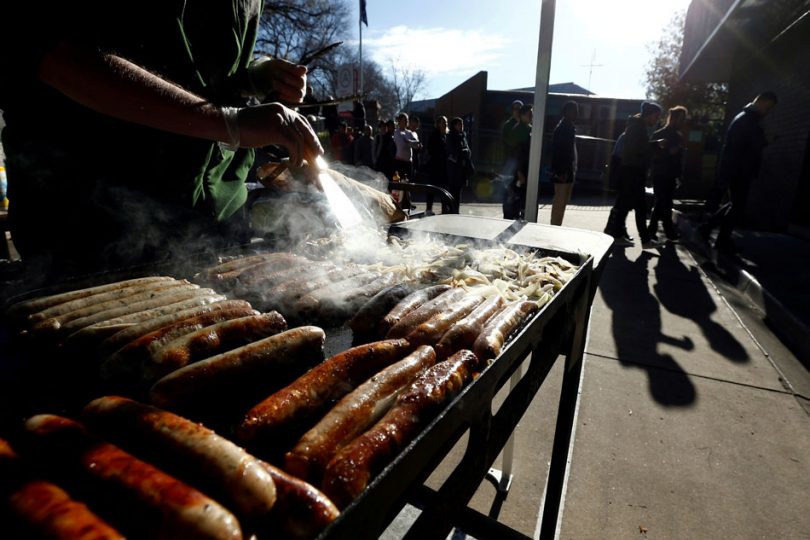 Sausage sizzles and voting queues are the order of the day in Monaro this weekend. File photo.

While Canberrans will be untroubled by the democracy sausage until mid-May, voters in the surrounding NSW State seats face the ballot box this weekend for an election where minority government of either stripe is a very plausible result.

So what will sway votes in neighbouring Monaro, where NSW Nationals leader and deputy premier John Barilaro expects a fight? Region Media spoke to voters across the electorate, which stretches from Queanbeyan and Bungendore down to Cooma and the high country.

Queanbeyan developer and businessman Stephen Bartlett says the electorate is politically polarised but locally, he believes people want a bigger vision for Queanbeyan. “We need investment in town so that it develops into a nice urban place where people want to be,” he says, adding that Queanbeyan continues to suffer from proximity to Canberra, the consequent lack of educational resources and healthcare that’s only “adequate”.

For Bartlett, that necessitates much stronger State government investment in regional planning and development. “Council is doing their best but they’re not town planners, they’re municipal service providers,” he says. “I think it needs more than that. We need vision and we need execution for regional NSW.”

And despite his own belief that the Berejiklian government is largely doing a good job, he thinks John Barilaro is on a knife edge in Monaro, and at risk from Googong residents, “Canberra people who are hardcore Labor voters”.

Bungendore businessman and Chamber of Commerce member David McLaren from the Woodworks Gallery also wants a more cohesive regional strategy that links Queanbeyan and the ACT through regional tourism.

“Making the Kings Highway a valuable tourism journey is especially important during the winter when trade is slow during the week,” he says. A related issue is the completed feasibility study for a bike rail trail from Bungendore to Captains Flat, which he says is “at a point where the State Government needs to step up and address properly.”

He’d like comprehensive State government investment in a regional tourist trail and recognition that places like Bungendore represent more than just heritage, but also a sophisticated contemporary arts vision.

Further south, grazier and Nimmitabel bakery owner Will Jardine also has rail trails on his mind, in this case, Queanbeyan to Bombala. He believes the Eden to Queanbeyan rail line proposal is “a red herring, a smokescreen for the rail trail”, and is irritated at the NSW Government’s massive investment in Sydney stadiums while being unwilling to stump up for what he sees as a guaranteed moneyspinner for the region.

He’s recently opened up business in Jindabyne and says that the shire amalgamation issue is still red hot in the old Bombala Shire. “If Bryce Wilson gets in for Labor, he’s promised a plebiscite on shire amalgamations and that has plenty of people down here salivating,” Jardine says. “Jindabyne people, for example, say they’re the economic growth centre of the region, but everything is being controlled from Cooma.”

Brumby culls remain a hotly contested issue, although Jardine believes most people now accept that the initial National Park policy was flawed and wild horse numbers must be vastly reduced in Kosciusko. He says climate change, water management on the Snowy with regard to environmental flows and energy, and wind farms are hot buttons in the high country.

And he sees the ongoing government poles and wires cash splash as less attractive than it used to be. “There is so much money around that it’s almost losing its appeal,” Jardine says. “The government has cash everywhere for everything, so if you don’t get what you want now, my guess is that it will become much harder in future.”

High country environmental activist and farmer Vicki Wallace is also focused on feral animal damage: she believes deer and feral pigs do as much damage as horses, and also points to savage wild dogs whose numbers would be reduced if their food sources were less prolific. But she’s really fired up about the threat of highly invasive African lovegrass.

“John Barilaro’s eyes glazed over when I raised it with him,” she says. “But this is a really major issue, it’s no ordinary weed. Our farmers put their hands in their pockets constantly trying to deal with invasive weeds but NSW seems only interested in new incursions.

“This one is literally a killer if it catches fire and it’s overrunning people’s farms, especially the smaller landowners. But all I’ve heard from Mr Barilaro’s office is that they’ll address it once they get back in.”

Is Monaro in for a change or will John Barilaro retain his seat?

Dan Cope - 2 hours ago
👏 well done Emma. View
Alexandra Mary - 2 hours ago
Jaimie-Lee Peattie it is! So awesome to see more being set up View
Montana ONeill - 3 hours ago
This is good to see and hopefully it grows throughout the region to other areas💙 View
Opinion 51

Capital Retro - 5 hours ago
It was reported this morning that on some international flights into Paris, 10% of the passengers had tested positive for the... View
Futureproof - 5 hours ago
International arrivals = lockdowns, rinse and repeat. There's a lesson there, but no one seems to have learnt a thing... View
Breaking 2

Acton - 5 hours ago
Bats carry desease, shriek incessantly, spread fleas, stink, excrete copiously, but have been allowed to take over part of Co... View
kenbehrens - 8 hours ago
The Government has been keen advocates of people, especially renters, being able to grow their own food. We have a vege patch... View
jwinston - 10 hours ago
Our hospitals are dysfunctional, roads aren’t maintained and education is nearly non-existent. But let’s waste time produ... View
News 10

kenbehrens - 7 hours ago
Before I retired, I commuted to the City. Annoying but tolerable. Living in Tuggeranong, I'd be pretty annoyed if I had to co... View
bj_ACT - 9 hours ago
More employment in Gungahlin is much needed. The Light Rail is full in one direction and pretty much empty in the other direc... View
Property 25

kenbehrens - 7 hours ago
Double taxation? Stamp Duty, Rates and Land Tax aren't really double taxation! In the ACT, Stamp Duty is tax deductible due t... View
Sam Oak - 8 hours ago
Ken, so an effective tax rate of 22.5% on CGT compared to 30% on income is such a big deal? I’m also not talking about the... View
News 3

jwinston - 10 hours ago
From all reports Bungendore are getting a HS built soon so they shouldn’t be attending the new JHS and Karabar already have... View
show more show less
*Results are based on activity within last 7 days

@the_riotact @The_RiotACT
In its day, the Gundaroo Wine Bar was the place to go in the village - and not just because it was the only place open. It was the #heart of the #community, thanks to the legendary hospitality of Matt, Beat and Kay Crowe https://t.co/fI1oW7BsAA (20 minutes ago)

@the_riotact @The_RiotACT
We've got all the hot news in this week's newsletter - from hot property, to hot-desking. Subscribe now! https://t.co/nl4QFZTDQW (1 hour ago)