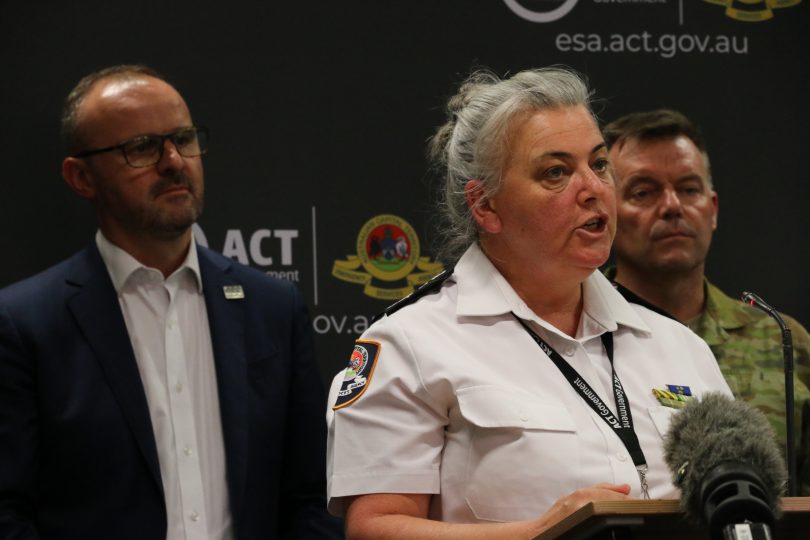 “If you don’t need to be in an area where there is a fire danger don’t be there stay at home.” – Georgeina Whelan, ESA Commissioner. Photo: Dominic Giannini.

Sightseers who rushed to Canberra’s southern edge on Tuesday to get a closer view of the Orroral Valley bushfire as it threatened Tharwa have been called out by Emergency Services Agency Commissioner Georgeina Whelan.

On Tuesday, residents complained on social media about the “disaster tourists” who had clogged streets and blocked driveways as they jockeyed for spots that would allow them to take photos of the fires bearing down on Canberra.

The one access road at Lanyon was blocked and one social media post expressed disbelief at the number of people cramming into Point Hutt to watch the fire.

Commissioner Whelan today lashed out at the people causing congestion in order to sticky-beak, telling people to stay away from fire areas if they have no reason to be there.

“We’ve really got to take stock. We have to stop disaster tourism,” she told ABC radio.

“It really gets to a point where it puts puts so many lives in danger and and limits the operational response of our emergency services and our police.

“I’m putting a call out to Canberrans: if you don’t need to be in an area where there is a fire danger don’t be there. Stay at home, stay safe.”

Ms Whelan said a great photo for Instagram is not worth a life nor the risk of slowing down the response of staff and volunteers who are working to keep Canberra safe.

“The spectacular photography that people are all chasing these days – we’re providing regular updates on all our social media channels so I would ask Canberrans to be considerate. Stay home, stay safe and help us keep Canberra safe,” she said. 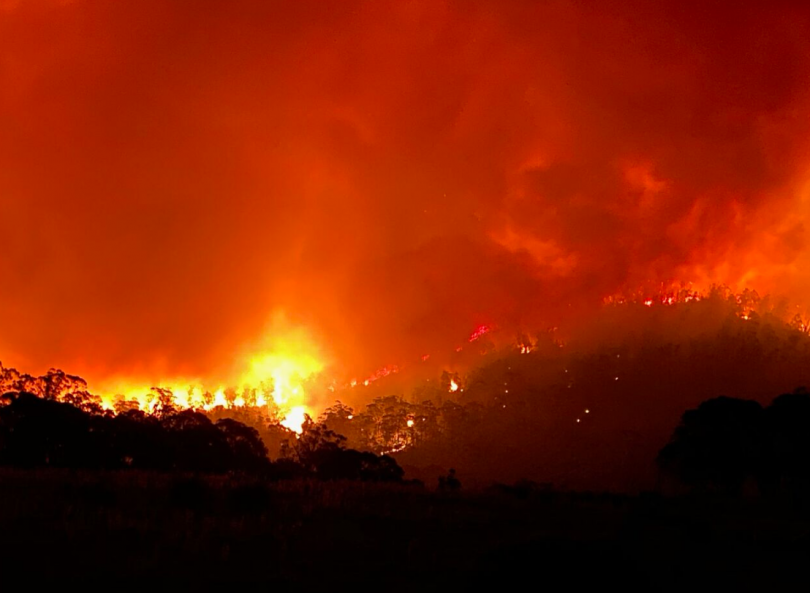 A shot of the Orroral Valley fire that accompanied an ESA update.

Ms Whelan appealed to photographers to not use the roofs of residents’ homes to ”get that great shot”.

Mellisa Langerman posted that sightseers were only putting themselves and residents at risk.

“Please from all of us who are right in the line of potential fire. We are stressed enough. We need to have clear roads to evacuate or allow firies or other emergency personnel in the next days or week or so to reach us. Do not come near us if you don’t live here, do not block roads, stay away. This is not a circus or a camera opportunity,” she said.

On social media, Peta Siebert was worried about how people would evacuate if necessary.

“If you don’t need to be out in Banks or Gordon then don’t be. Residents are anxious enough as it is and the people out here sticky beaking are only making it worse,” she posted.

“The top of my narrow street currently resembles a car park! None of the cars parked here live in this street. It’s going to be hard enough getting out of here if we need to in hurry without having to deal with additional traffic. Please think about what you are doing and the impact you’ll have by being here unnecessarily!”

Briony McIntosh posted that the amount of traffic was ”insane” and dangerous because drivers were looking at the fire, not the road.

@Clinton Berry “no there shouldn’t be a law against it, what next a law against free thought?”
With a comment like that, it’s obvious you have never been endowed with thought, free or otherwise. Do you seriously think that people should be allowed to just stroll on into a disaster area purely for the sake of copping a gander at what’s going on? If you are actually one of these disaster tourists, rather than simply promoting some warped kind of civil libertarian stance, you need to get a life.

The main roads down south are pretty limited and mostly single lane. Remember when they upgraded the Sewer pipe on Tharwa Dr and caused 90 minute delays for 100m of road.

Not sure if the roads of Tuggeranong could cope with an evacuation order for its 85,000 residents. Particularly south of Kambah/Wanniassa whose residents have pretty good access to Parkway, Athlon and Yamba.

People need to have some respect, grow TF up.

I dont understand people like this… I mean theres natural curiousity I get it (not the time at all for it) and then theres walking straight into the inferno and making it so difficult for everyone plus putting your own life at risk for what? A photo?

Julie Delves I wasn’t being literal but given how quickly the fire fronts can change course it is kind of apt since the people could be prevented from getting out. Not being literal in my original comment though

Braggers..seeking to get a shot of fame. Keep it up and one of those days it maybe your last shot..

Just like car accidents… elements of the public always think tragedy or emergency is a spectator sport. 🤬

Idiots why would they want to get in the way

Actual footage of these people’s brains

Get the police out there!

Amanda Evans Government needs to fund the police more so they can have enough resources for community policing. At the moment they are not funded other than to collect statistics.

Should be a law against it!

Keran Niquet There is….public nuisance and obstructing emergency services. If only that could be extended to include gross stupidity. 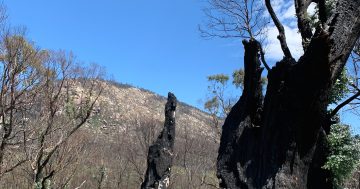