Where to eat on the South Coast 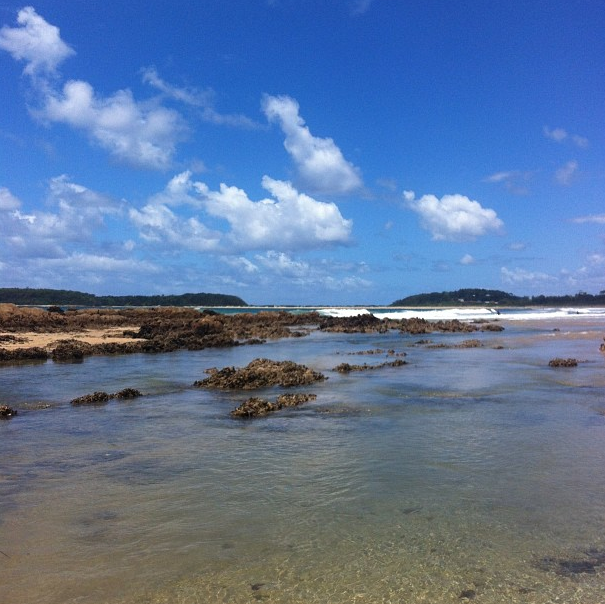 Whether you’re after some really good fish and chips, a meat pie or a fancy dinner for two, here’s a short guide to some of the South Coast’s most loved restaurants, cafes and takeaway shops.

No trip down the coast is complete without fish and chips for dinner. My recommendation for all things battered and deep fried is Berny’s at Batehaven (especially if you then take your food down to Corrigan’s Beach and eat it on the sand while it’s still hot). Friends also say good things about The Sandy Foot at Malua Bay, but I’m not convinced that it beats Berny’s.

If you’re the sort of person that likes the option of eating fish and chips with a knife and fork, there’s also the ever popular Innes’ Boatshed overlooking Clyde River in Bateman’s Bay.

And while this isn’t technically a takeaway joint, and prawns aren’t exactly fish and chips, I’m sneaking the prawns from Lucky’s Seafood at Ulladulla in here too. Buy them fresh and eat them on the beach. Delish.

For a lunch with a view, try Tuross Boatshed & Café, which is tucked in a wind-protected bay at Tuross Head and serves coastal café fare such as fish and chips, steak sandwiches and milkshakes. The best part about the Boatshed is that if you’re out in your boat, you can place your order by phone, pull up to the jetty and pick up your food when it’s ready.

Canberrans also seem to love the Starfish Deli for everything from oysters to woodfired pizza, as it’s always packed during tourist season.

Also, the pies from Hayden’s Pies in Ulladulla are so good that they made the cut in Sophia’s meat pie edition of our Best of Canberra Taste Off. They’re also available from Spence Friendly Grocer, so if you’re not heading down the coast this year you can still get a decent pie fix.

In my opinion, you really can’t beat Cupitt’s Kitchen for a long, lazy lunch surrounded by vineyards and green rolling hills. The restaurant is in the heart of Cupitt’s Winery in Ulladulla, uses fresh local produce and follows the philosophies of the Slow Food Movement (Rosie Cupitt is the leader of Slow Food Shoalhaven). Abandon any desire you had to eat healthy and try the duck fat potatoes. They are good.

Rick Stein at Bannisters in Mollymook is a close second, particularly for seafood, and then there’s also Ceto Restaurant and Bar in Ulladulla, which overlooks the harbour. I haven’t been to Ceto yet, but its tasting menu comes highly recommended.

For more on the South Coast, read our articles on best hotels and resorts, the best beaches and 10 things to do on the NSW South Coast.

So, do any of these seafood places sell genuinely fresh, locally caught fish?

Or is it all ‘rebranded’ imports from Thailand and Vietnam, alongside the ‘flake’?

What do you think we eat in Canberra?

There’s a little French Cafe at Maloneys Beach, (on the North side of Batemans Bay).
If you want good coffee and a fresh Croissant for brunch, this is your spot.

the Sorrisso – an italian restaurant in Narooma is outstanding and very reasonable.

I will second Rick Stein at Bannisters, my partner and I had the tasting menu with matched wines there a few years back and found it wonderful.

So, do any of these seafood places sell genuinely fresh, locally caught fish?

Or is it all ‘rebranded’ imports from Thailand and Vietnam, alongside the ‘flake’?

The Muffin Shop in Mossy Point make some damn good sandwiches and muffins! Rode the bike down a couple of weeks ago to beat all the Canberrans, travelling to the coast isn’t worth it once everyone goes on annual leave.

We recently dined at Wheelers restaurant in Pambula. It was fantastic specialising in seafood and great oysters. Highly recommend pork belly with prawns..

Fish and chips from the place on the corner at Tathra. Excellent choice and nicely done.

Beach food done like you’ve never had it at Bar Beach Kiosk down at Merimbula.

Apparently the cafe at the wharf which I think is called Locavore, also at Tathra is good. Have not yet tried it. Will next time, which hopefully will be very soon.

Not exactly the coast but on the way down:
Drover’s Rest in Bemboka. The best meal is grilled barra with salad and chips. Also the best coffee in the little village.
Bega Club in Bega. A properly cooked Chicken Schnitzel, pan fried, salad. Good prices for seniors too.
On the coast:
The Waterfront Cafe Merimbula, a little pricy but really great coffee and food.
The Bar Beach coffee shack – great place if the weather is not coming from the south.

The Whale at Narooma is also particularly good if you are after a nice meal in a romantic setting.

Julie Nimmo - 44 minutes ago
I met Sue often. Always gracious and dignified. So very saddened when I heard that a 4x4 had killed her on the Com Av Bridge.... View
Louise Roberts - 4 hours ago
Sue was my daughters primary school teacher. My daughters favorite ever teacher. We still talk about today. Well deserved Sue... View
News 229

Dean Soccol - 51 minutes ago
Nathan Grieve in Queensland every time we get a fine we lose points. So if you are one of those that don’t care about the m... View
Nathan Grieve - 1 hour ago
Andrew Nelson not every offence comes with demerit points, so unfortunately that statement is incorrect View
Andrew Nelson - 1 hour ago
Nathan you’re forgetting what the points system is about View
Opinion 90

Holiday Eats: Fish and chips on the coast

The best restaurants and bars on the South Coast

Seafood and eat it – what’s fresh this festive season?