Where you can spot the ‘Pink Supermoon’ tonight (spoiler alert: everywhere) 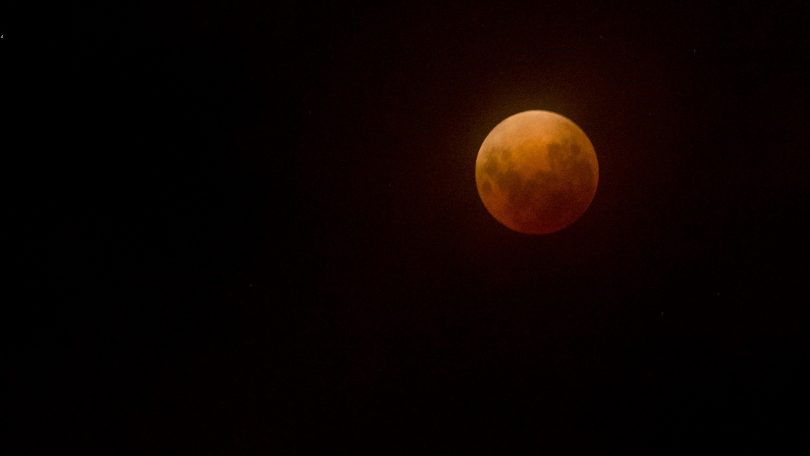 Although this moon won’t be pink, it will be super. Photo: Supplied.

Skywatchers across Canberra can rejoice this evening … no, Skywhale isn’t back, but a ‘pink’ supermoon will be visible.

The moon won’t actually be pink, but it will be very, very bright. This is because the full moon occurs when the moon is closest to the earth.

It’s named for the pink phlox, a flower that blooms around this time in the US.

While it isn’t a once-in-a-lifetime event, there will only be two supermoons this year, so it is a rare occurrence nevertheless.

The best viewing time will be early in the evening, from 5:30 pm onwards as the sun sets.

The official word is that the moon will be visible from 5:40 pm tonight to 7:29 am tomorrow.

READ ALSO: Hot in the City: Taste the flavours of Latin American street food at Chimi and Churri

Canberra Astronomical Society president Peter Williamson says you won’t have to go anywhere special to see the pink supermoon or even leave your backyard or street.

“It’s going to be so bright that you’ll be able to see it from all over, right from when it rises in the East all the way until it sets.

“So, there’s actually no need to travel out anywhere to look for darker skies,” he says.

That means whether you’re a night owl or an early bird, you’ve got no excuse for missing it.

Keen photographers who want to snap the perfect shot of the supermoon might enjoy the view across Lake George to the east, or you might want to snap up just how much light it casts across the city from wherever you happen to be.

Readers can watch with the unaided eye, but binoculars will reveal craters and dark features known as Mare (Latin for seas), which are areas containing Basalt rock.

The next supermoon will be visible on Wednesday, 26 May, but this time it will be a super ‘blood’ moon and will actually appear red.

Savita Ubhe - 32 minutes ago
Joel Suryawanshi wow domestic violence seem to be a huge issue there. Sad! View
Margaret Freemantle - 8 hours ago
Tegan Martin not sure what the answer is. Somehow, there has to be some pride instilled - perhaps well kept places get reduce... View
May Mac - 8 hours ago
Is the government competing with everyone else to book tradies in to do work? Why don't they have their own, like they used t... View
Food & Wine 12

Helen Mangos-Chadwick - 3 hours ago
What a beautiful photo, well done Dennis!!! 👌... View
Lorraine White - 8 hours ago
Really good food and such great people. Love it. View
Kathleen Brooks - 10 hours ago
Juha Turunen this is what I was talking about. View
News 81

Nada Krstin - 4 hours ago
Jo Hann see my recent post to reply to your "if you pay tax, you should have an option to vote for the government that spends... View
Nada Krstin - 5 hours ago
Jo Hannwow Jo, so you are a subject matter expert in employing tradie apprentices? You have been an employer have you? Plus a... View
What's On 16

James Hutson - 9 hours ago
Josh Ongley so you’re supporting or dissing me? Hard to tell View
Josh Ongley - 10 hours ago
James Hutson yeah because it’s not important to us In Australia we are a multi cultural society 😂😂😂 View
Food & Wine 7

bd84 - 10 hours ago
There’s always many “what about...” for things that people think are worthy. The budget isn’t a bottomless pit and th... View
HiddenDragon - 10 hours ago
"Whether the Coalition has traded in the debt truck or just parked it out of sight until needed remains to be seen." That par... View
Trevor Hicks - 12 hours ago
Jason Duarte Thanks to the ACT government... View
Opinion 94

Nathan Chadwick - 12 hours ago
What a great bloke - had the privilege of being coached by Rourkey at North Shore Bombers in Sydney before he moved to Ainsli... View
Sport 5

@The_RiotACT @The_RiotACT
If you haven't turned your heater on yet, a winter-like blast of cold air this weekend will probably change that. Canberra temperatures could plummet to minus-5 https://t.co/BIJD1FQsGc (7 hours ago)

@The_RiotACT @The_RiotACT
It could be your dream home - this spacious #Ngunnawal family property is one of the best to go on the market in a year https://t.co/hn7Z1isnmC (10 hours ago)