Who’s the fastest dachshund in the region? Head to the Werriwa Wiener Dash to find out 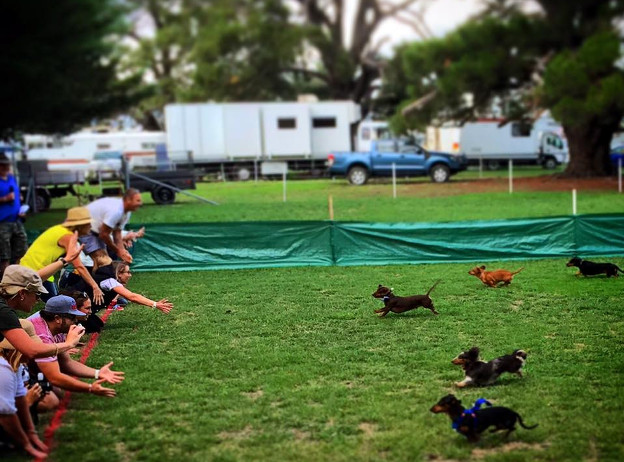 In 2016, Bungendore became the dachshund capital of Australia when it hosted the inaugural Werriwa Wiener Dash.

People came from across Australia to cheer on the long dogs and we had over 120 dachies in attendance. On 29 January 2017 we are planning to go even further and set the Official World Record for the most number of Dachshunds in one place, a literal wealth of wieners.

Due to demand from last year we have expanded the event for 2017 and will be running 16 heats throughout the day and the Grand Final, the prestigious Werriwa Weiner Dash Sash, as the last race of the day. For the first time we will be running the Para-Wiener Dash for those special dachshunds who are elderly or living with a disability that would preclude them from otherwise competing.

2017 will also see the return of the popular Dapper Dachshund fashions on the field for those sausages who like to dress up.

Most importantly, the Dash raises money for Dachshund Rescue Australia which rehomes Dachshunds from private homes and those rescued from pounds and animal shelters.

Even for those without a dachshund, you can come along to watch the races, learn more about the breed and pat a wiener.

One Response to Who’s the fastest dachshund in the region? Head to the Werriwa Wiener Dash to find out
Filter
Showing only Website comments

We are particularly after Standards for the races. If you have a Standard or larger size Mini please enter.

Jo Telfer - 3 hours ago
Doug Damn, well that sucks. Another idea: make it a little kids only thing ..seems the momentum is the main factor in the sev... View
Doug Jackson - 3 hours ago
Kane P-s from a financial perspective, the cost between remove and repair is massive - remove is so much cheaper. View
Doug Jackson - 3 hours ago
Jo Telfer The only thing an assessment will do is identify that the government has to spend money to fix it to reduce the ris... View
News 3

@the_riotact @The_RiotACT
What connects actor Billy Zane to Telstra Tower? How fast can you go on an e-scooter? Clem Cummings designed what iconic piece of #Canberra architecture? If you know these answers, take our weekly Ken Behrens #Quiz! https://t.co/m0lOAYZGLY (35 minutes ago)