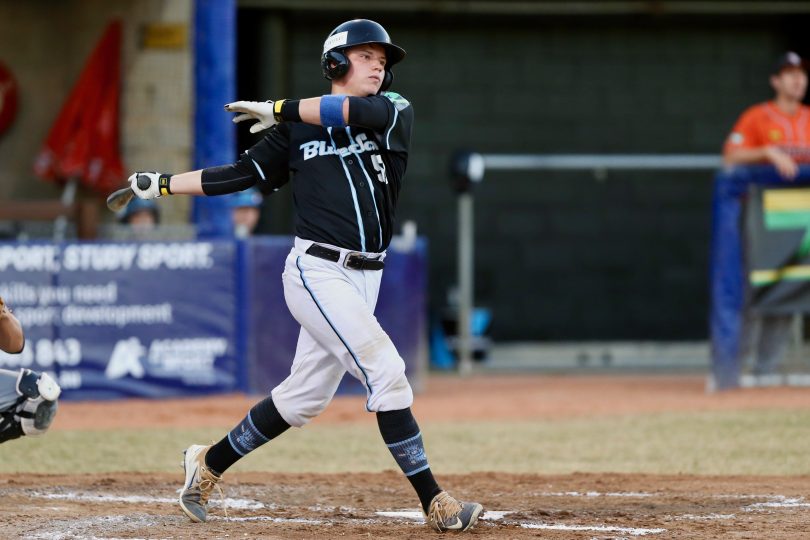 Mitch Edwards said signing with the MLB powerhouse Philadelphia Phillies made him think about how he was following in the footsteps of his childhood heroes and what he can do to set a good example. File Photo.

Canberra’s baseball star Mitch Edwards has joined the chorus of Australian sporting stars who are calling for a ban on alcohol advertising across all sporting codes.

Edwards, who is currently overseas representing his country at the U23 Baseball World Cup, teamed up with AFL great Mick Malthouse, Parramatta Eels legend Steve Ella and former Cricket Australia selector John Inverarity to call for a stop of alcohol advertising during sport events and television coverage.

The powerhouse line-up launched the End Alcohol Advertising in Sport campaign last week, as a new report revealed children were exposed to more than three instances of alcohol advertising every minute of the 2018 NRL grand final.

In the AFL grand final, 118 occurrences of alcohol advertising were identified across the 161 minutes of game time including quarter/halftime coverage analysed, all of which took place during children’s viewing hours.

Edwards said signing with the MLB powerhouse Philadelphia Phillies made him think about how he was following in the footsteps of his childhood heroes and what he can do to set a good example.

“I remembered how much I looked up to my baseball heroes and how I would imitate whatever they did and how they played,” Edwards told Region Media. “This made me really conscious of the effect I now have on young fans of the game, and I want to set a good example.

“So when I heard about the End Alcohol Advertising in Sport campaign it made sense to me as an idea, and it was something I really wanted to get behind to be a positive role model.”

Posted by The Sporting Capital on Sunday, October 14, 2018

Edwards said most sports have a major association with alcohol and that is why the End Alcohol Advertising in Sport campaign is so important.

“The campaign isn’t about stopping people from having a beer while they watch sports. But you shouldn’t be watching a game of baseball or AFL or cricket and seeing so many alcohol ads that are trying to link to sporting success. It sends the wrong message about sports, and it can be harmful to kids to be watching.”

Edwards said he would like to see sports promoting a healthy culture and setting a good example to kids.

“I know first-hand how much influence sports and sportspeople can have, and I think we have a responsibility to use this influence the right way. So I believe that sports need to stop promoting alcohol and begin promoting healthy brands instead.” 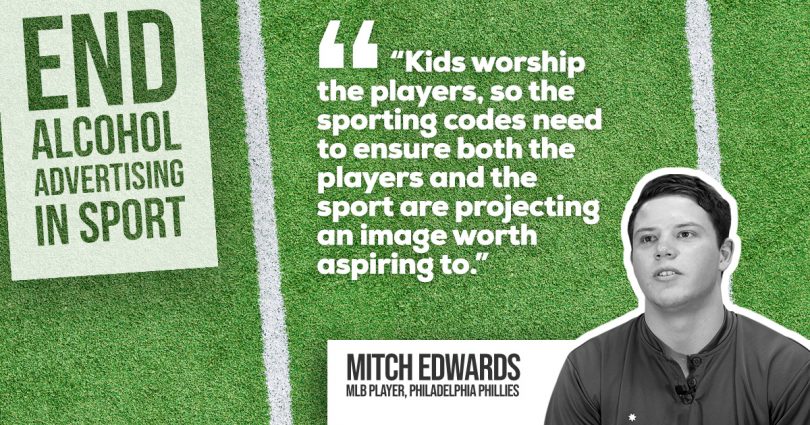 FARE chief executive Michael Thorn says that children’s exposure to alcohol advertising during two of the biggest sporting contests of the year is the alarming consequence of a “nonsensical exemption” in the Commercial Television Code of Practice.

“The evidence is very clear that children’s exposure to alcohol advertising encourages them to start drinking earlier, to binge drink more often, and to start a journey toward alcohol-related harm,” Mr Thorn said.

“It’s time for regulators to put an end to the alcohol industry’s deliberate efforts to encourage systematic alcohol harm and abuse in its customers of tomorrow.”

Mr Thorn is asking all Australians to lend their support to the campaign and ensure Australia’s political leaders hear their voices by signing up online on the End Alcohol Advertising in Sport campaign website.