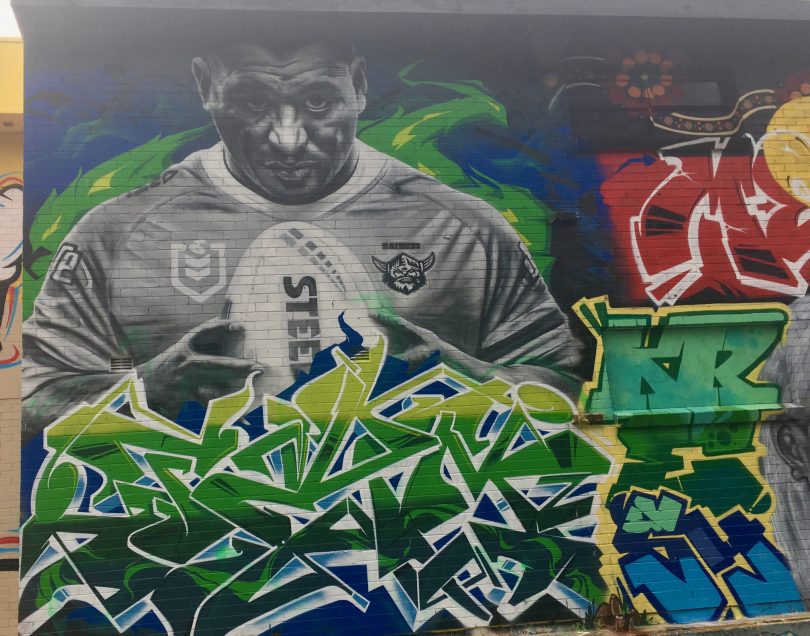 Mural of Josh Papalii on the wall of the PCYC in Turner. Photo: Tim Gavel.

The image of a giant Josh Papalii mural on the wall of the abandoned Police and Community Youth Club (PCYC) building in Turner has the potential to be groundbreaking.

Have we finally publicly embraced and acknowledged our sports stars after years of shuffling them into areas that are strictly defined for sports events?

There are few examples celebrating our sports success in Canberra through visual expression, while throughout the country there are great examples of artworks that not only celebrate sport but also celebrate influential and significant events that have made strong social statements. 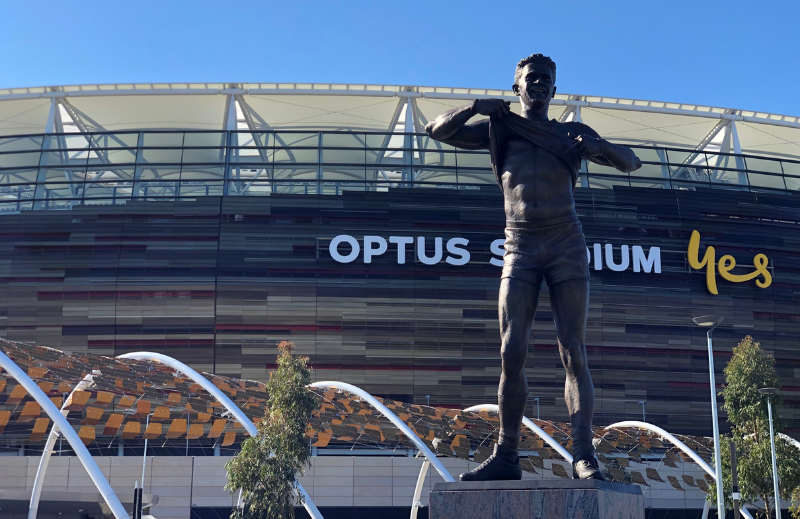 There’s the statue of Nicky Winmar at Optus Stadium in Perth famously raising his jersey and pointing to his skin. Then in Melbourne’s Federation Square you will find an incredible bronze statue of Tayla Harris, an AFLW player. The pose is taken directly from a photo by Michael Wilson, which prompted an unexpected misogynistic outburst on Seven’s social media.

Another statue in Melbourne honours Peter Norman, who stood in unity with Tommie Smith and John Carlos on the podium, as Smith and Carlos raised their fists in the Black Power salute at the 1968 Mexico Olympics. Norman stood to receive his silver medal with the Olympic Project for Human Rights badge pinned to his uniform. He had just run an incredible 20.06 in the 200-metre race. This time remains the fastest for an Australian over this distance.

READ MORE Josh Papalii: one of the Raiders most endearing characters

On a corner in Sydney’s Surry Hills you will find a mural of Adam Goodes. Painted by four artists from Apparition Media, the portrait spans a two-storey building.

Walkthrough Los Angeles and there are giant murals of LeBron James and Ronda Rousey. And English Premier League clubs are celebrated through public art.

In Canberra, you have to go to Canberra Stadium to see the statues of Mal Meninga and Laurie Daley.

Canberra has some great public art and artists. And there is room for more. Our city has some great spaces and vistas that are perfect to celebrate and remember sportspeople and achievements.

The lack of recognition of the contribution made by Canberra’s AFL community is a mystery. There should be a mural celebrating the ACT’s victory over the VFL or a statue of Alex Jesaulenko who attended St Edmund’s College and then Telopea Park High.

Jesaulenko was an inaugural inductee in the Carlton Football Club’s Hall of Fame and the Australian Football Hall of Fame. He was also elevated to legend status in both these sports halls. In 2002 he was inducted into the Ukrainian Sports Hall of Fame, and in 2010, the Sport Australia Hall of Fame.

Lauren Jackson is a Canberra sporting legend, having pulled on the Capital’s singlet from 1999 to 2006, and then again from 2009 to 2016. Her career awards are too many to mention but significant among them is being named as a WNBA All-Star many, many times. Of course, she also represented Australia at numerous Olympics and World Championships and was inducted into the Australian Basketball Hall of Fame in 2019.

A number of years ago there were plans for a sports walk of fame through Canberra, similar to the one in Queanbeyan, but it appears to have all but disappeared. There was also a campaign to establish a sports museum in the city. That too has disappeared into the ether. With these initiatives shelved or not likely for some time, perhaps the promotion of sports public art is a possibility.

There is very little that publicly celebrates the success of the Raiders, the Brumbies, the UC Capitals, Canberra United, the Cannons and the Canberra Brave, apart from murals on the side of buses. There are also numerous individuals involved in many sports who have achieved greatness but are not recognised in this way.

Individual sporting organisations do what they can to honour those who have made a significant contribution to that sport. But drive through Canberra and there is very little public acknowledgment of our sporting success as a community.

We need to have permanent reminders, and the Papalii mural shows that this can happen. It promotes a sports great and it highlights the significance of sport in our community.

Mal Meninga sketched on the glass doors of the Sports Bar of the Hellenic Club, Woden.

People will name their favourite sport’s stars, but in a 100 years people will be wondering who they are. With only a few, very few exceptions, sport stars come and go, while any statue will go on, long after anyone knows or cares who they are. Wall murals are likely the better place to portray them, as they are not so permanent. Murals can be changed, as the sport stars change.

The Caps were not successful in their most recent game.

Surely the town gets a University of Canberra Capitals murual. Time to for a shrine to Canberra’s most successful team.

Sport is hugely popular in this country. It provides great entertainment for young and old. Some sportspeople are talented and a joy to watch – let them be celebrated!

Margaret Freemantle don’t disagree – but rugby league already has more than its fair share in the limelight. There are other more worthy (and interesting) people than “footy playerz “ and their off-season antics……

Although artwork to represent a person is fine, my favourite artworks are often those done for art’s sake alone. They are usually more interesting. (And to beat the inevitable ‘critics’, I didn’t say all art done for art alone, is good.)

Not limited to sport

Why only sporting prowess Tim Gravel? Canberrans are so much more than that.

There’s a big ricky Stuart one in Queanbeyan

Statues of professional sportspeople are essentially expressions of “people at work”.

By the nature of their work they are rarely born in one town and stay in that town for life so their “contribution” to a particular community is very limited.

And we can do without the social and political statements that are often associated with them.

Shouldn’t we be celebrating other fields that are probably more deserved? Arts? Science? Humanitarianism? Even politics?

Darren true, can’t wait for the Andrew Barr or Scomo art…. maybe the artist who designed the Belco owl would be an appropriate choice.

Darren Sault why are they “probably more deserved”?

Margaret Freemantle see the comments below from others……kinda reinforces my thoughts.