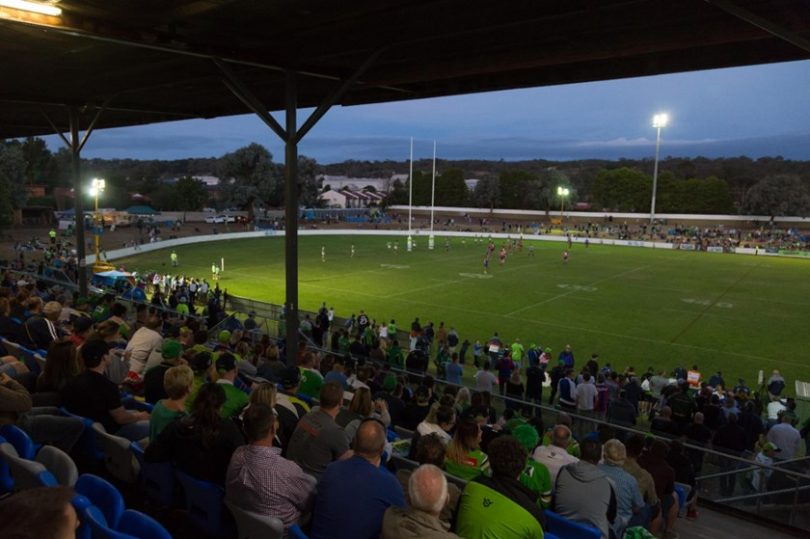 As the Raiders prepare to return to Seiffert Oval for the trial against the Roosters later this month, it’s worth reflecting on its significance for the team over the years.

Ricky Stuart vividly remembers as a young boy waiting outside the change room at Seiffert for the Raiders players to emerge after a game hoping for an autograph.

Later in life, Stuart went on to become one the club’s greatest players, guiding the club to three premierships and now, potentially, becoming the longest-serving coach in Raiders history.

History is important to Stuart.

He rightfully believes the current players and staff need to be fully across the origins of the club, its champion teams and players. His desire to ensure the current players are across the club’s history is evidenced by the walk down the tunnel to the change rooms at Canberra Stadium – the walls are lined with images and memories created by the Raiders’ significant past.

Important to that history is the club’s first home ground, Seiffert Oval, where the Raiders recorded their first-ever victory after seven losses in a row to start the club’s inaugural season in 1982.

Stuart as a young boy always wanted to play at Seiffert.

He recalls, “It was always a goal to play for the Raiders at Seiffert and I still remember the first day I ran out there, and that memory will be cherished forever. It’s nice to have the opportunity to go back and coach a Raiders team there”.

The trial against the Sydney Roosters on 27 February represents a rare foray back to Seiffert since the club moved its headquarters to Canberra after the 1989 season. They spent their first seven years at the ground.

Some original fans threatened to never attend another Raiders home game in protest. Some eventually relented while others have held to that promise.

Seiffert played its part in the 1989 premiership run with the Raiders defeating the Illawarra Steelers before going on to beat the Dragons away from home to make the finals.

From there the Raiders won another four to win their first and arguably their greatest premiership.

For sheer emotional entertainment, the game against the Broncos in 1989 at Seiffert will go down as one of the great moments in the club’s history. I commentated that game as 18,272 fans crammed into the facility to see the Raiders beat the Broncos 27-6.

For Stuart, those memories give added importance to the upcoming trial.

“It’s our spiritual home. It brings back many fond memories for me from when I was a young boy until now.”

Seiffert brings back memories of simpler times when you were so close to the on-field action, you could almost feel the contact.

“It’s one of those grounds where you literally have the spectators, the crowd, sitting right on top of you,” says Ricky.

Players rocked up to training in beaten up old utes, semi-fatigued from a day at work, while some players actually lived in a house on the grounds of Seiffert Oval.

‘The Taj’ as the house at Seiffert was known, was home to young players coming to the club from outside Canberra.

It is why the club’s first trial at Seiffert in four years is so important. It gives many supporters, many of whom haven’t had the opportunity to connect with the ground, a chance to do so.

Once there you will understand why it remains the Raiders spiritual home.

Russell Nankervis - 4 hours ago
Lori J Tas better vote Greens then. They value public institutions like this View
Monica Tiffen - 6 hours ago
It is a very interesting place. I hope things are worked out!... View
Teresa Layton - 7 hours ago
Mark Huppert agreed. What an obscene amount of money being thrown at something that requires no change. View
News 70

Anthony Briscoe - 6 hours ago
Barr BARR from opening his mouth and send the RAT to kingdom come for a start View
Jack Hearps - 8 hours ago
Yep ... ignore international perspectives and focus on our navel ... especially enriching our local religious zealots ... lib... View
Russell Nankervis - 8 hours ago
The Canberra Liberals will never change. Climate change affects us all and the UN set important benchmarks to meet. Pretty su... View
Food & Wine 14

Capital Retro - 9 hours ago
Is the Nissan Cedric still available? It would be compatible with Canberra. View
News 16

chewy14 - 9 hours ago
Capital Retro, You haven't put on the table expert findings, You've clearly cherry picked one heading that you found that you... View
Courts & Crime 2

chewy14 - 10 hours ago
Another great sentencing outcome by our courts that will really provide a great disincentive to individuals in the community... View
Food & Wine 1

Nick Swain - 10 hours ago
There was a lot happening in the Chinese restaurant scene in Canberra late 50s and early 60s. Before that - not much Chinese... View
show more show less
*Results are based on activity within last 7 days

@The_RiotACT @The_RiotACT
It will be interesting to see the big ideas that emerge from the meeting of space geeks at Canberra's first SpaceHack competition on 17-18 June https://t.co/H3c1Ns4d0C (6 hours ago)

@The_RiotACT @The_RiotACT
Fifty years on from The Battle of Long Khanh - not to be confused with that of Long Tan - The @RoyalAustMint has released a commemorative coin in honour of those who fought in it https://t.co/ZhrD1us4S5 (8 hours ago)