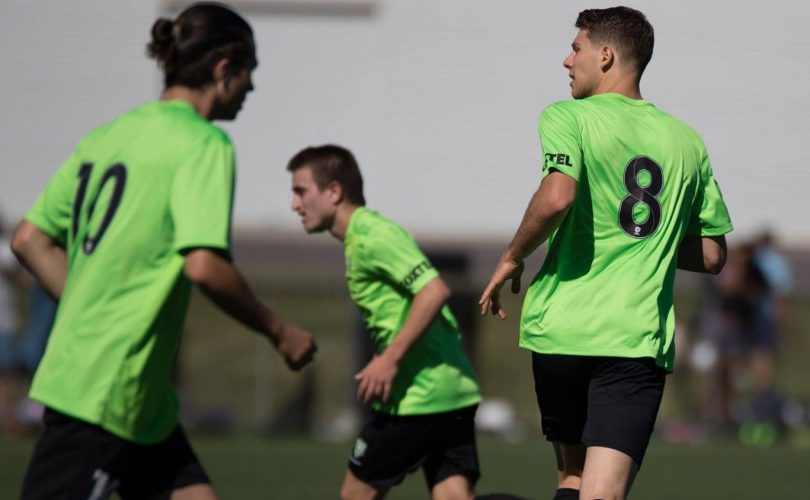 Canberra United is about to embark on its second season in the National Youth League (NYL) which will provide local and regional football talents with an opportunity to showcase their skills in front of A-league academy scouts.

A disappointing debut season last year saw United rooted to the bottom of the table with only one win from eight matches, which included an 8-0 thrashing and a pair of 6-3 drubbings. But despite the less-than-satisfactory debut season, the competition remains vital for the development of Canberra and the region’s young male footballers.

The competition provides a pathway for local players to be exposed to coaches of A-league academies as they take on under-21 teams from Western Sydney Wanderers, Sydney FC, Central Coast Mariners and Newcastle Jets.

United is the only team competing in the NYL who are not aligned with an A-League club, but FFA still wanted to provide an opportunity for the ACT’s best young talents to progress to the nation’s top flight.

With the 18-man squad filled with Canberra locals and those in the surrounding region, head coach Dean Ugrinic said the competition is vital to the young men looking to progress their career.

“The NYL gives a window of opportunity for those exceptional young players to be able to play against the best players across the country,” he said.

“Sometimes we get caught up in our own little bubble and we think that we are very good here. I think it is very important for our better players to be exposed to higher level competitions. The only downside is there are only eight games.

“I know I have some exceptional talent here it’s just about providing those stepping stones to move potentially beyond Canberra and into the A-league.”

Ugrinic has not only recruited from local Canberra clubs but also the surrounding region, with three players from the Wollongong Wolves joining the side, including former Belconnen United player Bul Juach. The spread of talent across the surrounding region is not lost on Ugrinic, who emphasised the importance of looking beyond Canberra for recruitment.

“I think it’s a squad that is representative of not only Canberra but the surrounding region,” he said. “It’s got a balance of experience from last year and a couple of over-age players who I believe will add value to the squad and also, some exciting young talent in Zac Barbatano and Nikola Jadric who I believe are rising stars.

“We have provided opportunities to some players from outside the local competition who I believe are good enough to compete effectively in the NYL.”

Ugrinic is a well-known figure in the Canberra and wider football community, having taken on high-level coaching positions at a number of clubs with great success across his 18-year coaching career. Prior to winning the 2017 NPL title with Belconnen United, Ugrinic took charge at O’Connor Knights, Canberra Olympic and Woden Valley at various times, making an impact in his tenure.

He said Canberra United not only provides a platform for Canberra football talents but those in the surrounding region. The head coach has been working with his young charges for nearly three months, which included a “fairly exhaustive” trial period.

“Our region reaches out to Goulburn, Wagga, Griffith and even to the South Coast. We would be foolish not to tap into these regional areas,” Ugrinic said. “There could be some exceptional talent who can make us competitive and stronger.

“We were hoping to see as much of the talent as we possibly could, not only here, but also outside of our local region. We have got to a point where we have nailed it, so hopefully, with the combination of preparation and trialling, we will hit the ground running this weekend.

“What I’m hoping to do is put out a side that our supporters will enjoy watching and be proud of the talent that we have in Canberra, which I believe is on par with any of the talent other NYL squads have at their disposal.”

Amy De Corsey - 58 seconds ago
Gavin De Corsey where’s Aranda? View
chewy14 - 1 hour ago
This is a strange comment. Firstly, it assumes that the local ACT government is fully in control of house prices in the ACT w... View
Aneta Petreski - 1 hour ago
Isnt this most of Canberra?... View
Community 29

Wayne Williams - 36 minutes ago
Lilly Walter tell that to the recently fatherless young fella in Brisbane, women commit family violence also View
Abbey Snell - 36 minutes ago
Samantha there is a non-gender specific sleepbus. I think this is a situation for equity. A large cause of homelessness for w... View
Monica Tiffen - 60 minutes ago
Great idea! View
News 2

paservank - 48 minutes ago
...or get rid of all the cars? (an equally stupid and self-centred idea) View
chewy14 - 5 hours ago
It's ridiculous that the government is deliberately creating situations that expose these vulnerable road users to harm yet t... View
News 15

Jamii Lee - 57 minutes ago
So you’d rather the building sit unused for a unspecified amount of time just so a few people (would love to know the figur... View
Breaking 1

ChrisinTurner - 59 minutes ago
Another great advantage of using unmarked Police cars. Why aren't they all unmarked? View
Lifestyle 13

@The_RiotACT @The_RiotACT
The ACT will receive up to 3000 more doses a week of the Pfizer COVID-19 vaccine and has begun accepting appointments for a second vaccination hub to be located in the airport precinct. The new centre will open Tuesday week https://t.co/X2SJ2ittyD (16 minutes ago)