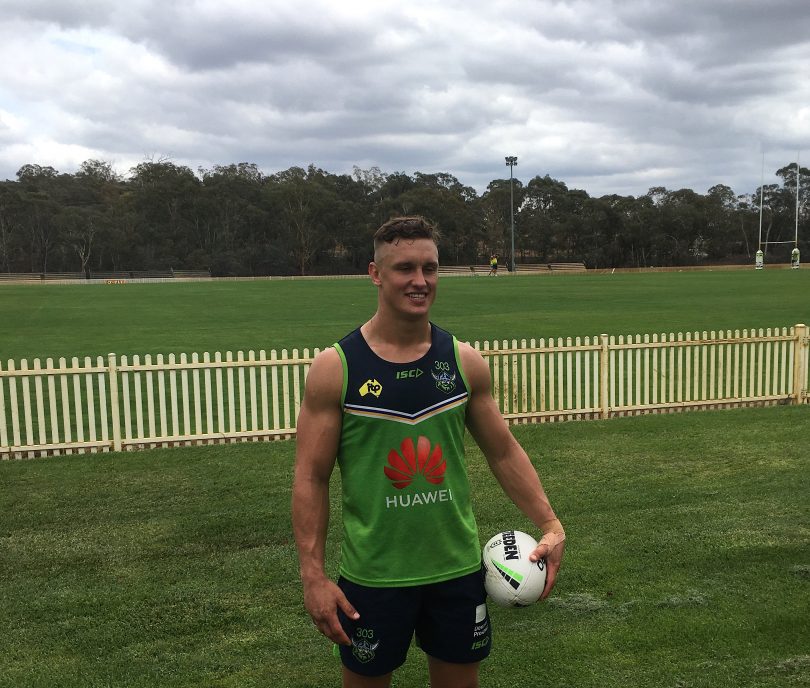 “I want to win a competition with the Raiders,” Wighton said at today’s announcement of his four-year deal with the club. Photo: Region Media.

Canberra Raiders’ five-eighth Jack Wighton is on course to become a one-club player in the NRL after a signing a new four-year, $3 million deal with the club.

Wighton rejected more lucrative offers from other clubs to stay in Canberra.

Wighton, the Clive Churchill medallist from last year’s NRL grand final, came of age as a footballer and as a person in 2019 after his career teetered following a well documented off-field incident.

Wighton faced nine charges relating to an assault outside a Civic nightclub in February 2018, just days after the birth of his second child.

One year later, not only was he a key player in the Raiders’ success, but he also represented NSW and the Kangaroos.

There had been speculation about his future beyond this season as he tested the market, but he said Canberra was his first option.

The four-year deal will see Wighton remain a Raider until the end of the 2024 season.

“It was definitely an easy decision to stay with this bunch of boys and the coaching staff,” Wighton said today.

It will effectively see him playing for the Raiders for the next five seasons.

Having made his debut for the Raiders in 2012, Wighton has played 156 first games and scored 46 tries.

His new deal will see him become a 10-year player at the Raiders and he is excited by the prospect of becoming a one-club player.

Wighton said his re-signing was all about helping the club go one step further than last year, and his decision to stay at the club was based on the likelihood of future success.

“I want to win a competition with the Raiders,” Wighton said. “I know we have the squad to do it and if we can stay together and continue what we’ve built we’ll be able to achieve our goal.

“I love the club. They’ve always been there for me and I want to repay them by staying and playing the best footy I can to be successful,” he said.

Raiders CEO Don Furner said Wighton’s re-signing had been a priority for the club’s premiership ambitions.

“Jack has been with the club since he was a junior and this deal will see him become a 10-year player at first-grade level, which in this era is a significant achievement,” Furner said. “It’s also worth noting that during the negotiations, Jack’s decision to re-sign was based mainly on future success, which shows the belief he has in the club moving forward.

“Jack could have earnt more money by signing with another club but sacrificed that against what we have here in Canberra. He took much less money to stay and that says a lot about Jack and his stability here.”

Next up for the Raiders will be contract extensions for captain Jarrod Croker and winger Nick Cotric.

The positive news comes at a time when the club is waiting on the NRL to determine if former Melbourne Storm centre Curtis Scott will be free to start the season.

Scott’s chances of playing in round one received a boost after his lawyers were given the green light to show the NRL crucial footage from his arrest on Australia Day. He faces six charges, including two counts of assaulting police.

The Raiders will participate in this week’s NRL Nines in Perth, and also have a trial match against Canterbury on 29 February in Port Macquarie.

Matthew Barton top bloke glad to keep him in canberra! 🤣

Karen Hardy - 51 minutes ago
Helen Stafford WHAT DID I TELL YOU View
Acton - 10 hours ago
I use a trap which is effective in catching individual wasps and discourages nesting. The trap uses a European wasp attractan... View
Community 5

MERC600 - 3 hours ago
Always good to see a new industry opening up in the region, although I didn't have a clue where Capricorn park was. So did a... View
Lifestyle 2

Michael Ilsley - 9 hours ago
How lucky are those children going to be being taught by such an incredible person. View
Rhonda Maxwell - 12 hours ago
Brad is an amazing young fella who is living a full life. His family and friends are s wonderful support as is his footy team... View
Pam Perkins - 13 hours ago
A very inspiring young man all the best in all your future endeavours and wonderful community support... View
Community 11

@The_RiotACT @The_RiotACT
Local sport survives thanks to the dedication of volunteers. After decades with @NetballACT, including helping it survive insolvency in 2017-18 and then COVID-19, Louise Bilston has called time - although the passion remains https://t.co/uWx1fICLyo (31 minutes ago)