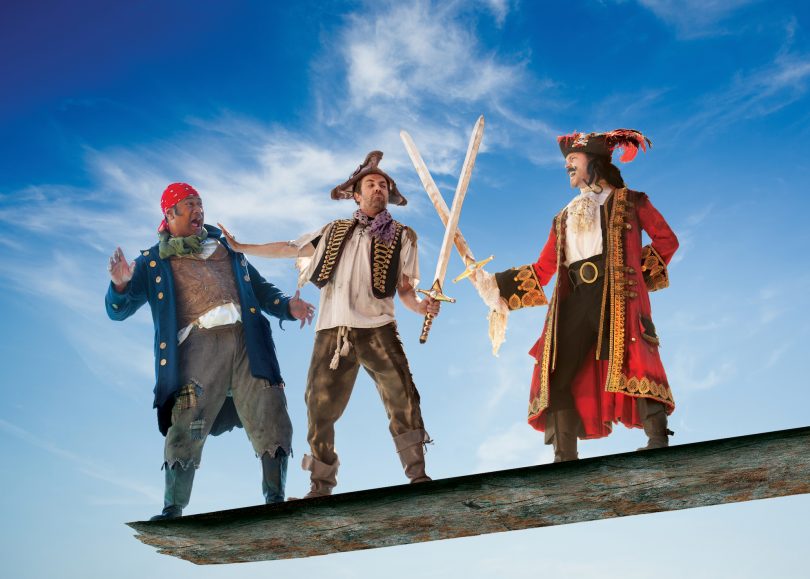 Everyone loves Peter Pan, the enduring children’s classic about never wanting to grow up. And everyone loves pantomime, oh yes they do. So what sort of a magical riot of the imagination would result if you bring them together?

You could have the chance to find out when Peter Pan Goes Wrong comes to the Canberra Theatre on 6 February: Region Media has five double passes to give away to the opening night of this exciting bit of fun and wild adventure on the stage.

The pantomime format means there’s lots of opportunity for interaction too, and not just all the boos for Captain Hook. The poor old crocodile’s relentless quest for more bites of the pirate captain draws out the audience and there’s much madness as would-be actors try to play everyone from Mrs Darling to Tinker Bell, including impossible costume changes.

But this production is far more than a nice treat for the children: there’s plenty to amuse the adults too. The original West End production was nominated for an Olivier Award for Best New Comedy after a very successful London run.

The play’s writers and producers have built on the success of The Play that Goes Wrong, a similarly constructed farce that audiences loved in 2017. Creating this much mayhem is, of course, a highly skilled feat. Nothing looks like such an entertaining mess without hard work behind the scenes. But all you’ll see is the hilarity front of the stage, or even beforehand as you’re bossed around in the theatre by the harried “stagehands” and “director”.

If you’d like to win one of five double passes to Peter Pan Goes Wrong on opening night, 6 February, tell us in 50 words or less about your funniest unintentional disaster.

Enter your comment on the RiotACT site (not social media) and we’ll pick five winners and contact you via email by 4 pm on Friday, 1 February.

Mad dash to airport. Flight about to leave. Boarding finished. Gate closed. Desperate plea to let us through. Rush onto tarmac, up steps, into plane. No-one aboard. Empty. ‘Plane, over there’ someone is shouting and pointing. Everyone looking at us as we sheepishly board the right plane. Major embarrassment.

The first time I made dinner for my father I made him meat loaf. He ate it without a word of complaint. When I went to eat it later that evening imagine my surprise to find a missing crucial ingredient, the meat!

I was showing off when 10 pin bowling years ago, last laugh was on me when the ball wouldn’t leave my fingers and I slid a short way down the alley instead.

Getting dressed in the dark and arriving at work with 2 different shoes on, same style but not the same colour. Embarrasing but I couldn’t help laughing.

I made a birthday cake for my 4yr old son, a “little red car” a la Wiggles fame but he didn’t recognise it and asked “What is it?” Oh dear!

When my kids were little we were in a Sydney shopping centre. Distracted by the Christmas decorations I tripped and literally fell head first into a large empty rectangular planter box. Legs in the air, I could hear my kids laughing as I Yelled help, thankfully I was wearing pants!

We are Canberra newbies, just settling in. We were looking for a church that suited us as a family.
We visited one beautiful church, it was 1950’s style service, very formal, children seen and not heard. Our kids were soo bored bless them.

The minister asked the children in the congregation for another word for ‘communion’ and our 3 year old shouted “space alien” into the enormous echoing silence. Elder son then guffawed with laughter (he doesn’t do quiet anything), no one else found it remotely amusing. Deathly silence followed, with turned heads and disapproving faces.

Finally when the kids went out for Sunday school, we went with them under the guise of ‘settling them in’ and then made a diversion to the car, scuttling across the carpark. A twin-set and pearls lady appeared literally poking her head through a thick hedge trying to get us back in – we were virtually running to the car, pushing the children, growling at them under our breath not to pass comment on the service until the car doors were safely closed. So embarrassed, complete disaster.

Every year in the Canberran heat, we fill up a large rubber pool in the courtyard to alleviate not having air conditioning. Imagine my surprise when my partner forgot to turn the tap off literally bringing the outdoor pool inside to the family room including the plastic furniture and towels.