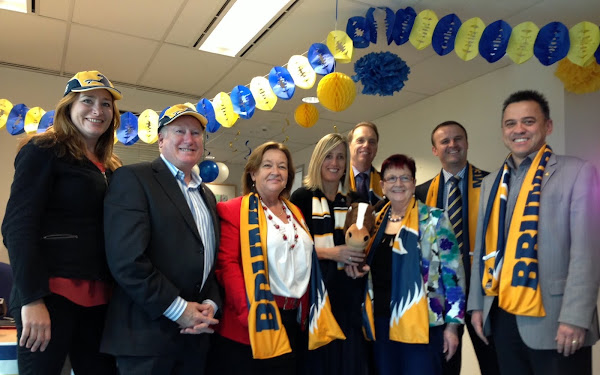 Katy Gallagher is doing publicity for the Brumbies, and calling on Canberra business to help her do so in order to win a season pass to every Brumbies home game in 2014.

“Brumbies fever is growing around our city and everyone in the ACT can get behind the team and show their support from across the ditch by decorating their workplace or business,” the Chief Minister said.

“Those who get decorating will also have the chance to cheer on the Brumbies at every home game in 2014 with a free season pass for the best Brumbies decorative effort,” the Chief Minister said.

“Simply take a photo of your decorations and send it to communicationsandengagement@act.gov.au and the best effort will win the double season pass.”

If you’re the kind of Brumbies fan that already has a lot of Blue and yellow about, might as well give it a shot.

If you do paint your office blue and gold, send us a photo too!

….and while we are sledging other codes:

– has anyone noticed how boring soccer is?
– why do they have scrums in Rugby League?
– why do gridiron players need all that body armour?
– why do Aussie Rules players always seem to be fumbling the ball?
– and so on
– and so forth.

About the same time that Soccer fans realise it’s called football because its played on foot as opposed to horseback rather than because they use their feet.*

“At around the same time that football (soccer) gets serious about players deliberately taking a dive to milk penalties or when someone can explain the offside rule in a logical manner.”

Er, one simple offside rule compared with the myriad of rugby rules that has everyone who was not born with a rugby ball in their mouth scratching their heads? Give us a break.

And as for milking penalties, how about the mysterious ailments rugby players seem to get until the trainer runs on with water (instructions) and their teammates have had a breather?

At around the same time that football (soccer) gets serious about players deliberately taking a dive to milk penalties or when someone can explain the offside rule in a logical manner.

Annette Milnes - 27 minutes ago
As I mentioned before handicapped people are only a small proportion of the people who will have trouble with public transpor... View
Colin Vivian - 1 hour ago
Article rather gives the game away “filled-in area will need to settle for a few years before any further development can t... View
Colin Vivian - 1 hour ago
Annette Milnes you won’t need to worry. The pandemic will provide the perfect opportunity for the Government to ‘discover... View
News 8

chewy14 - 49 minutes ago
The smell of Nimbyism here is stronger than the smell of rotting green waste in the gross pollutant trap right next door and... View
t2owe - 1 hour ago
The proposed site is also a Floodway. This was initially pointed out to TAMS years ago when they first proposed that location... View
JS9 - 3 hours ago
As long as properly designed, this has the sniff of another 'dickson parklands' to me - i.e. a few whinging locals that simpl... View
News 1

Paul Murray - 3 hours ago
For thousands of years, there has been a penultimate solution (short of execution) for people who just will not, will not, wi... View
Opinion 12

quetzacchi - 4 hours ago
It's all good to say "if we all stay sensible" but if everyone stayed sensible, we wouldn't have had the Victoria outbreak. I... View
Breaking 1

theroundone - 5 hours ago
What are the names of the suspects? View
News 3

Jack Wiles - 21 hours ago
It's not the type of meeting place depicted by so many comments; it's not somewhere you would take young family but is a plac... View
News 20

Marea Fatseas - 1 day ago
Essentially, 80 percent will still go to landfill under this proposal, which is not a great outcome. View
Opinion 2

MERC600 - 1 day ago
Tim I fear your saying 'The most obvious is the economic downturn created by COVID-19' will prevail. Also this Covid bug econ... View
News 64

Chief Minister Andrew Barr has poured cold water on the possibility of a new football stadium being constructed in the...
News 28

@The_RiotACT @The_RiotACT
Have you seen the latest additions to Batemans Bay’s Sculpture Walk that have provoked a social media storm? https://t.co/gBfhLBC6yi (2 hours ago)

@The_RiotACT @The_RiotACT
After four years and hundreds of columns, Rebecca Vassarotti is signing off to contest the 2020 ACT election https://t.co/7gQ7xJheeJ (3 hours ago)

@The_RiotACT @The_RiotACT
The proposal for a new city bus layover in Turner has sparked a Legislative Assembly petition from local residents who are not on board with the idea https://t.co/O1EAe7wcFk (4 hours ago)