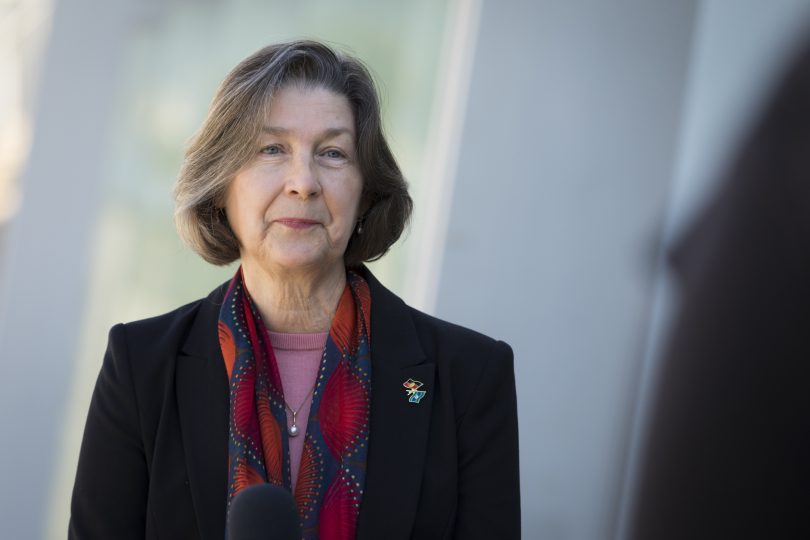 Coordinator-General of Office for Mental Health and Wellbeing Dr Elizabeth Moore is encouraging young people to speak out about their mental health. Photo: Michelle Kroll.

One in five young people in the ACT said they were suffering from psychological distress during the pandemic last year, according to a new report by Mission Australia.

The rates were higher for the Territory’s Indigenous community, with the number increasing to one in three people, while females were more than twice as likely to have experienced psychological distress compared to their male counterparts.

The report found that young people are still reporting significant barriers to reaching out for help. More than two in three people felt scared or anxious about their mental illness, and 60 per cent of people were either too embarrassed to reach out or felt like they could handle it on their own.

With today (7 September) marking the second R U OK? Day during the pandemic, Coordinator-General of Office for Mental Health and Wellbeing Dr Elizabeth Moore told Region Media that reaching out and asking others about their mental health can help break the stigma and let them know they are not alone.

“A lot of people tell me that they feel alone and that nobody notices something is wrong. [Hearing the question] is enough for most people to know they are not alone,” she said.

“Self-stigma is really high and is what people feel themselves: ‘I should be able to cope, I should not be feeling like this’.

“That connectedness … once somebody is able to reach out and say, ‘Are you feeling alright? Everybody feels this way, you are not alone’, is really important in terms of building people’s wellbeing.”

Mission Australia’s regional leader Craig Westall said those that do reach out for help are often finding gaps in the mental health system which have been exacerbated by COVID-19.

“We all have a duty to safeguard young people’s wellbeing and properly support the enormous number of young people contending with mental health challenges,” he said.

“More age-appropriate prevention and early intervention mental health services are needed, and for these to be effective, young people must be central to the co-design, development and adaptation of such services and tools – both at school and within their communities.”

“We are still in the dark as to why mental health and suicide risk has increased in our current cohort of youth, a finding that is not unique to Australia,” Professor Hudson said.

“Early intervention in adolescence and childhood is imperative to help reduce these figures.

“This report shows that young people in distress will seek help directly from friends, parents and the internet. As such, we need to continue to build gatekeeper support training and provide online and app-based tools that may be a key part of the solution.”

Dr Moore said that alternatives like digital resources are a good option for people who do not have anyone to talk to, are finding it difficult to reach out, or need more information while they continue to figure out how they feel.

The Question, Persuade, Refer program offers information for people who are trying to support someone experiencing severe psychological distress.

If you or someone you know is struggling, Lifeline’s 24-hour crisis support line is available on 13 11 14.

One Response to With high rates of youth psychological distress, it’s time to ask: R U OK?
Filter
Showing only Website comments

R.U.OK – can you seek comfort in the arms of a loved one interstate? No. If you don’t have the internet or a phone, and you don’t have any means to buy online, can you go to a shop to purchase a device? No. Can you go to a BBQ with a bunch of mates and discuss things? No. Can you do some retail therapy to cheer yourself up? No. No worries, R.U.OK day says you will be OK

Scott Hunter - 35 minutes ago
It would be awesome but let’s do it either side of winter. View
David Rose - 8 hours ago
We should get the band back together, cobber. But let me get some thermal underwear first... View
Dale Brittain - 8 hours ago
As the ex-Marketing Manager for the GMC400/Canberra 400, all I can say is that it will need lobbying to Canberra’s ultra-co... View
News 29