With an array of instruments and varying abundance of facial hair, The Tipsy Scholars take their debut EP on the road 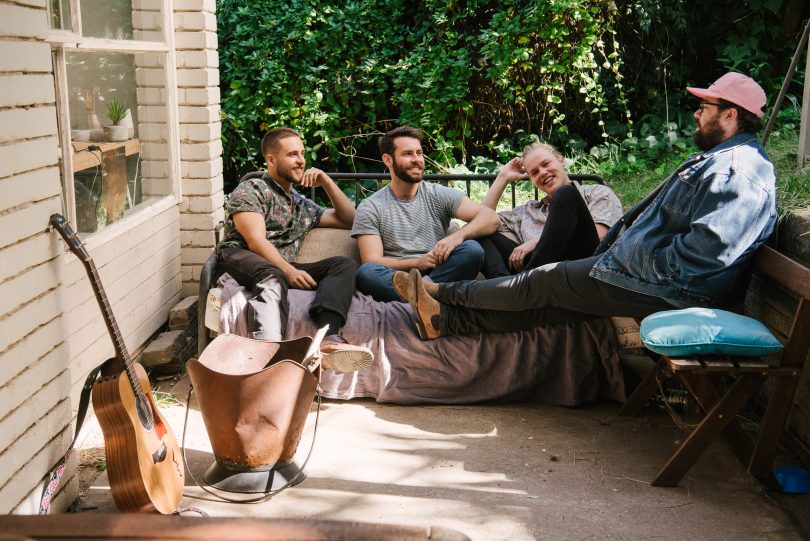 The Tipsy Scholars – from left, Alec Brinsmead, Joel Shapero, James Kelly, and Conagh McMahon-Hogan – are taking their debut EP Nowhere To Be on the road. Photos: Supplied.

If you see a small car driving up and down the coast with four blokes and their instruments cramped inside, there is a good chance it’s The Tipsy Scholars, who are in the midst of taking their debut EP Nowhere to Be to capital cities and rural towns.

Bringing with them their light-hearted and larrikin ways, the four-piece band is sharing its honest stories, catchy hooks and alluring harmonies at 11 gigs on the Australian east coast, and are making a stop in Canberra, their spiritual home, this weekend.

The Tipsy Scholars – formerly known as The Gipsy Scholars – formed during an ANU O-week party four years ago, with James Kelly, Conagh McMahon-Hogan and Joel Shapero starting the band after a couple of jam sessions. The band was missing their rhythmic piece of the puzzle until they met Alec Brinsmead in 2014.

Brinsmead was playing a gig with a different band at an ANU event, where he bumped into the trio and got to chatting. The newly formed band asked the drummer to join them, to which he agreed.

“I remember the first rehearsal was a bit of a mess,” Brinsmead recalls with a laugh. “They rocked up late because they got lost and then half the time was just gags and banter rather than any playing.

“But when they did play the songs they had written, I realised that this was a project that I really wanted to be a part of. It was just good, honest music which is something that James and Conagh, who are the primary writers of the band, have consistently been able to write over the past four years.

“I am very fortunate that I managed to play at that uni gig.” 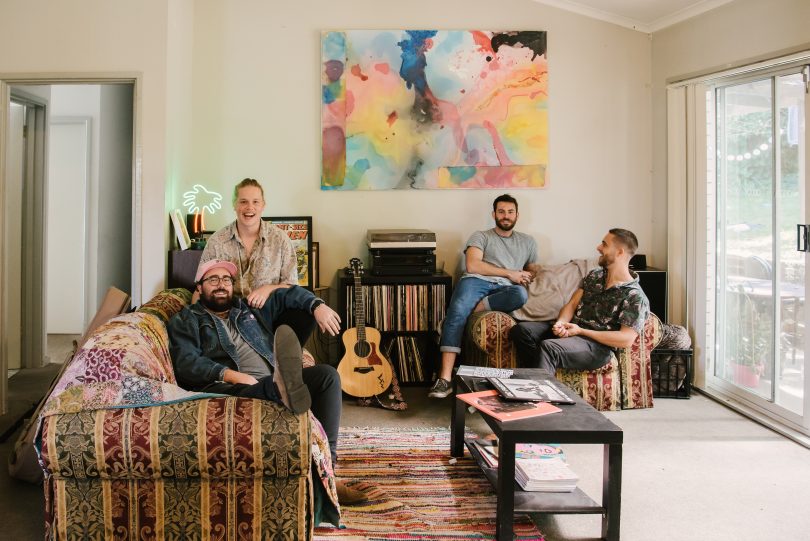 It took Brinsmead a little while to adjust to the different vibe his new-found bandmates brought, but it has been a move that he has never regretted.

“At uni, I was trying to compete with some really amazing artists at the music school so it was really refreshing to not only have a really good band to play in but to also have good mates,” he said.

“I don’t have any brothers, but when I have kids, they will definitely have three uncles. At the core of everything we do, we are good mates.”

That feeling of mateship gets put to the test whenever they are cramped in the car together for 12 hours straight, but their friendship has strengthened the more time they spend together.

As the result of years of writing, touring and their mateship, the debut EP is jampacked with an array of indie-rock songs. Their musical tones tell fun-loving stories of their life while addressing topics such as long-distance relationships and addiction to technology.

Their poignant track Modern Anxiety speaks of the ever-increasing misuse of social media and stumbling through life without building real-life connections. Brinsmead revealed the song came from a scary and vulnerable place for the band.

(WARNING – The song does contain a few F-bombs)

“James [Kelly] wrote this song after we had our first ever sell-out show in Sydney a couple of years ago,” Brinsmead said. “We were super amped because we had never had a sold-out show before. The room was packed and we were halfway through our third song when James fainted on stage and had to go off and chill out in the green room for a bit with the three of us remaining on stage, freaking out.”

Kelly returned after one song and after the gig told the group that he had been stressing out that day and had been frequently checking his phone and social media. As the lyrics say in the first verse, he had forgotten the chords and words, and become overwhelmed and passed out.

“Putting the song together, we knew we wanted it on the EP because it has a message that is so relevant,” Brinsmead said. “It was also our first song to be played on Triple J, so it is nice to know, and especially for James, that he is not alone in those anxious moments and to have people connect with the message is a great thing for us to achieve.” 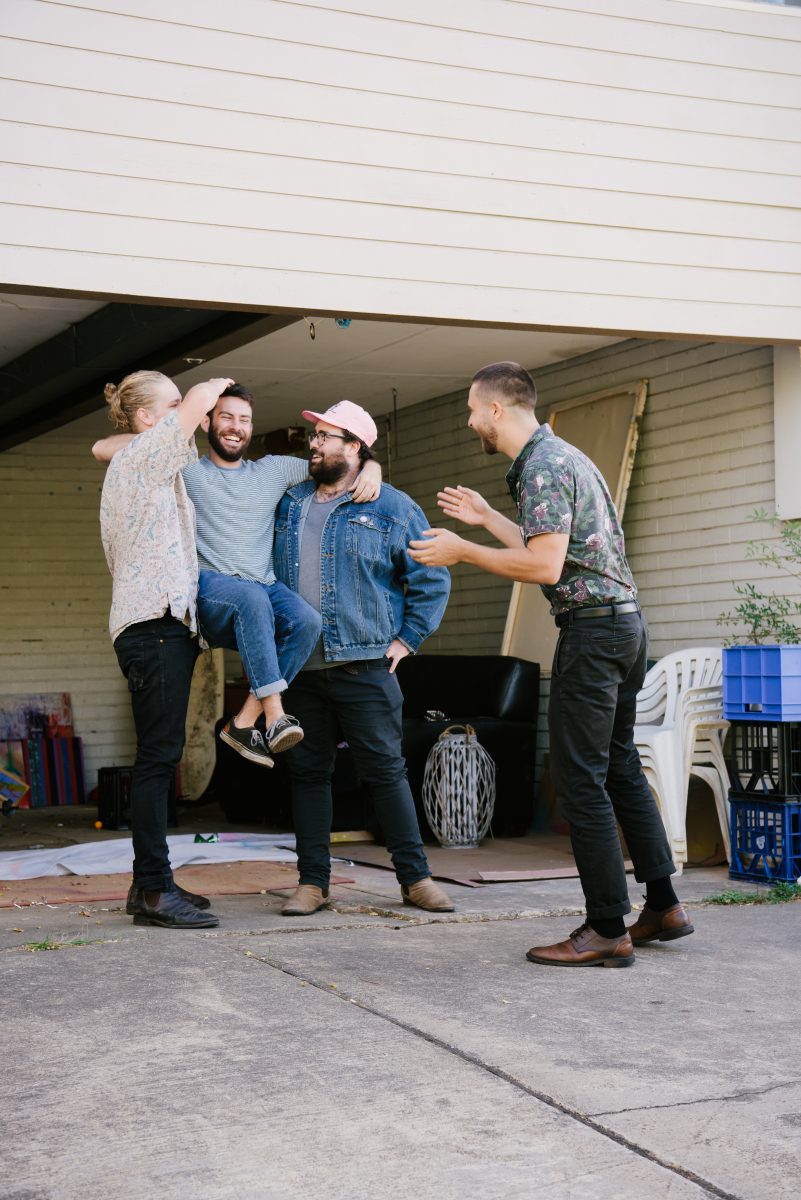 The lyrics sum up the group to perfection, especially the support they show for each other. After all, the band know that they are in this crazy, technology-obsessed world together.

Hailing from Bathurst and Sydney, the group move base between Sydney and Canberra but the nation’s capital will always remain their old stomping ground.

“Conagh grew up in Bathurst and James, Joel and I are from Sydney and we all met in Canberra, so it feels like we have three cities that we can call home,” Brinsmead said.

“The Canberra music scene itself is so good because everyone looks out for each other and Canberra has an enthusiasm for music. Without venues like Phoenix, the Front, Smith’s – the list is endless – I don’t think we will have our fan base and that’s why playing at Canberra venues will always feel like our home turf.”

The Tipsy Scholars will be hitting The Polish Club this Saturday night (28 July) and throwing a huge party to celebrate the EP’s release in their hometown. Joining the band are the talented Lady Denman, Jackson Howard and jazz-rap outfit Koscalla.

One Response to With an array of instruments and varying abundance of facial hair, The Tipsy Scholars take their debut EP on the road
Filter
Showing all comments
Show only Website comments
Show only Facebook comments
Order
Newest to Oldest
Oldest to Newest

Michael Ilsley - 10 minutes ago
Privatise education View
Paul South - 3 hours ago
A broom through the whole works would be nice . The whole system is unnecessary complicated. The culture of the whole school... View
Stephen Matthews - 6 hours ago
Paul Leins You can spot ghe sky viewers here View
Opinion 201

Alex Fox - 10 minutes ago
Ali Light Alasady nah that just makes you the angry driver 😌 View
Paul Funnell - 3 hours ago
I have no problem with people doing the speed limit my hate is people doing 10-15 kph under the speed limit for no reason peo... View
Lyn Mellier - 3 hours ago
I've been tooted when indicating, slowing down to turn into my own driveway. Rude impatient drivers on Canberra roads. View
Breaking 22