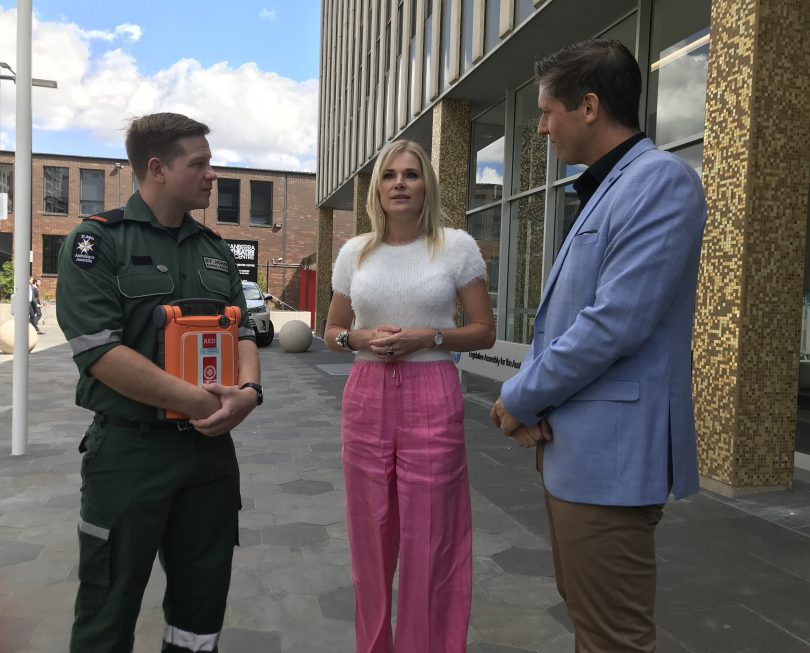 Thomas Cressy was at the gym when the unthinkable happened.

Another member of the group fitness class he was participating in – who was only 31 years old at the time – went into cardiac arrest.

Luckily Mr Cressy, a St Johns Ambulance first responder, was on hand and delivered compressions and breaths as part of CPR but, because the gym didn’t have a defibrillator, another bystander was forced to run over the road to the local supermarket to retrieve one.

Seven minutes elapsed before it arrived and the man could be shocked.

“[Without it], who knows what could have happened? However, I know that this device absolutely helped in saving a life,” Mr Cressy explained.

According to St John Ambulance CEO Adrian Watts, having quick access to a defibrillator could save the lives of up to 100 Canberrans a year.

And while there’s currently no requirement for them to be installed in public buildings, Mr Watts has long said that’s something which should be changed.

Mr Watts has described the government’s response so far to calls to put defibrillators in public buildings as mostly underwhelming.

“Their response [last year] suggested it wasn’t their responsibility,” he explained.

He said he was aware of many cases in which it had been up to an individual school’s Parents and Citizens groups to advocate for defibrillators to be installed.

Opposition spokesperson for health Leanne Castley earlier this week called on the ACT Government to install defibrillators in government buildings across Canberra, including in schools and workplaces.

“Less than half (38 of 89) of ACT government schools have defibrillators on campus and Canberra has the opportunity to lead the nation with this life-saving initiative,” Ms Castley said.

“Every life in Canberra that we lose is one too many.”

She said it would be a simple fix – and wouldn’t present an enormous cost to the government either as each defibrillator costs $2500 for installation and upkeep.

St John’s Ambulance estimates it would cost the government $1 million to provide 400 defibrillators to cover the required buildings.

Ms Castley’s motion, which she introduced to the ACT Legislative Assembly on Wednesday (23 March) also called for a public education campaign and for the government to examine installing defibrillators on all Canberra buses.

The government, however, while not entirely rubbishing Ms Castley’s motion, argued a legislative mandate was not the best way forward.

Minister for Health Rachel Stephen-Smith said the government “supported the intent of Ms Castley’s motion” but wanted to clarify the progress that was already underway.

She said there were concerns around whether bystanders would actually have the confidence to use a defibrillator.

According to one report which Ms Stephen-Smith referenced, “most untrained staff reported they were likely to wait for a first aid trained staff member or emergency services, rather than activate a defibrillator without training”.

She said there were also complexities around the usefulness of the location of publicly-accessible defibrillators relating to how likely a cardiac arrest would be as well as whether someone would actually use it if an event did occur.

Schools are supported to make purchases such as defibrillators in budget funding arrangements, the Minister said.

According to Ms Stephen-Smith’s motion, the government will continue supporting government schools and agencies to increase the availability of defibrillators in their facilities.

It will also consider how to increase public awareness of the use of and access to defibrillators to save lives in conjunction with St John Ambulance and the Heart Foundation.

dont hold your breathe, time for a change

Maybe because the Liberals bang on and on about taxes and government spending and debt, event if the debt is reasonable.

Wait until October and the single use AEDs come into the Australian market, they cost $329 capital and a monthly subscription to ensure remotely that the device and batteries are in order. Much cheaper than a reusable AED at $2500 that we all hope are never needed, but as a paramedic, I’ve seen them be used with great success so an AED is a good bit of kit for the community. There’s just a cheaper single use one around the corner….

Everyone should do the CPR certificate. It gives you confidence to step up and have a go should the need arise. Any effort is better than just walking away. You get to train with the AED and you learn how smart a piece of kit this is. It talks you through and even decides and tells you if the heart shock isn’t required.

You’d think with all the accusations of there being a pandemic, that just maybe they would of created another ICU ward. Guess it’s not as bad as they made it out to be after all…

I hope they have one at the crematorium now. They did n’t when a man collapsed there and I helped in January 2021.

Carol Ofori you mean saved his life not helped he wouldn’t be alive if it wasnt for you and the other person that helped. the staff where not helpful one bit in the situation.

Good on St John Ambulance Australia ACT, and others, for promoting wider access to AEDs. Such an important thing I would have thought.

You would be dreaming if you thought this useless, one eyed government would, 1 think of doing it and, 2 divert $1m from their precious tram.

They are already in some Govt buildings

Because trams are more important than people’s lives.

I’m surprised these aren’t already in place. They should be done asap

Andy Kay a heart attack is not cardiac arrest.

I am a little surprised they are not already there

Linny Hawkins they are (were) expensive

Do it. If you ask community’s opinions, never will be done

Who has even seen someone use one of these in a office or school?

James Quinton all it takes is one time.

Jacob Mulholland I get that. But that’s not my question

Jacob Mulholland yep, watched a guy save someone else’s life.

Rowan Parr sweet. Tally is at 1 and a few.

Just to make it clear I’m not against putting these in.

James Quinton Happens a lot more than what you think

Brad Mann I tried to find the stats on it .

Brad Mann I would think they would be linked through the company that makes them or health.

A gym without a defibrillator shows that there is a fatal flaw in our regulations.