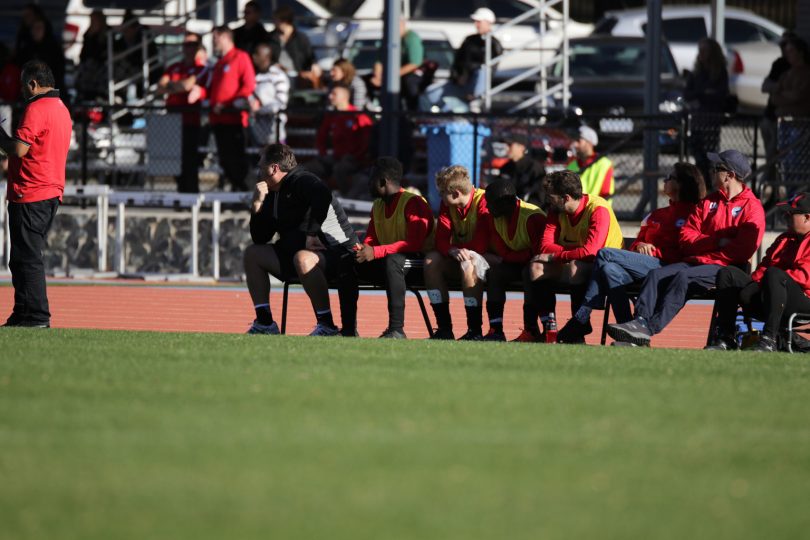 Woden-Weston’s bench during a game this season. Photo: Supplied by Capital Football.

Woden-Weston Football Club is in hot water after the club had four results overturned due to fielding an ineligible player in their squad and breaching the Player Points System (PPS).

Woden-Weston’s NPL side have had three league matches and an FFA Cup tie deemed as forfeits after breaching competition regulations concerning the PPS requirements for the 2018 season.

NPL wins over Tigers FC, Belconnen United and an FFA Cup victory over Tuggeranong United have been overturned to 3-0 results, with their 3-2 loss to Olympic being changed to a forfeit result.

The Player Points System (PPS) applies to each premier league club in the NPL and requires each club to remain within the points cap when registering players for their squad for the season.

Capital Football revealed Woden-Weston had an extra visa-player on the PPS and did not denote the player as a visa player.

Capital Football said that if Woden-Weston had correctly listed as visa players then the points total would be over the 200-point cap.

The updated results have left Woden Weston on the bottom of the NPL ladder after six rounds with only one point from their 1-1 draw with Gungahlin United last weekend.

Tuggeranong will take the place of Woden Weston in the FFA Cup quarter-final clash with Monaro Panthers.

Jody Berg - 7 minutes ago
Jo Martyn , you should paint some! View
Mandii Bennett - 9 minutes ago
Betty Meiksa thanks for bringing joy View
Alice Caroline - 2 hours ago
I saw one in a tree along the Queanbeyan river walk💕 so cute! Such a gorgeous idea. View
News 18

Margaret Edwards - 25 minutes ago
That’s where I fell in love with aqua aerobics many years ago. View
Tracey Crump - 33 minutes ago
Lizzie Parlane I think the pools will remain open (post lockdown) but the fitness programmes, including aquarobics will cease... View
Lizzie Parlane - 4 hours ago
Incredibly disappointed. I have used both pools for 18 years now - through pregnancy, to teach my son to swim, to keep fit. T... View
News 12

JC - 37 minutes ago
Cool story. Except that isn’t what has happened. No where near that much has BEEN spent on lightrail nor has what has been... View
nadine - 2 hours ago
Exactly, when our population was around 250k we had 3 hospitals. Our population as almost doubled but we only have 2 public h... View
whatwik - 2 hours ago
Any informed updates on schools in the ACT and Victoria planning to commence staged returns on 5 October, but NSW not until 2... View
News 23