Seldom are we told stories of WWI heroes who stayed behind and replaced the menfolk by keeping businesses, households, farms, banks and the economy afloat. The Women of Empire Exhibition 1914 – 1919 brings us the stories of over thirty Australian and New Zealand women whose experiences of the First World War transformed their lives forever.

To mark the Centenary of World War One, Dressing Australia Museum of Costume is telling the stories of these women through this unique costume exhibition, Women of Empire, at the National Film and Sound Archive from January 6th – 14th. This is the only exhibition in the world dedicated solely to the Women of the First World War and has already been seen by an estimated half a million people in ANZ, in venues ranging from small town halls to Sir Peter Jackson’s Great War Museum in Wellington. 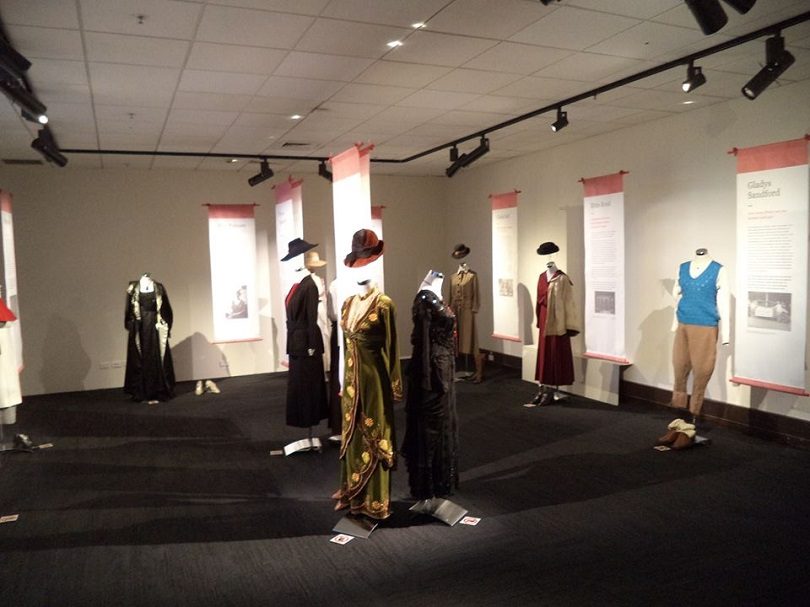 The exhibition features original costumes bringing to life the incredible stories of these women. The costumes are from Dressing Australia Museum of Costume Collection which has a range of everything from Jane Austen to World War I era. The costumes display ranges from women who did voluntary work raising money for women and children displaced by war, to women who made comforts and clothing for the troops. Some of the costumes are of women in uniform, women campaigning against women in conscription and even women in mourning.

Fiona Baversock is the Exhibition Curator. Fiona and her husband Keith Baverstock, founded Seams Old about twenty years ago. They sell antique and vintage (really old stuff) that they have been collecting for two decades at fairs in Canberra and around the country. Their love for social history stems from forty plus years of involvement in teaching, writing and lecturing in the industry. For exhibition visitors who want a costume souvenir or anyone who likes vintage, the old NFSA shop will host the Vintage Fashion Rumble, selling antique, vintage and retro costumes, clothes and accessories from Seams Old all week and other similar vintage sellers on Sunday the 14th. 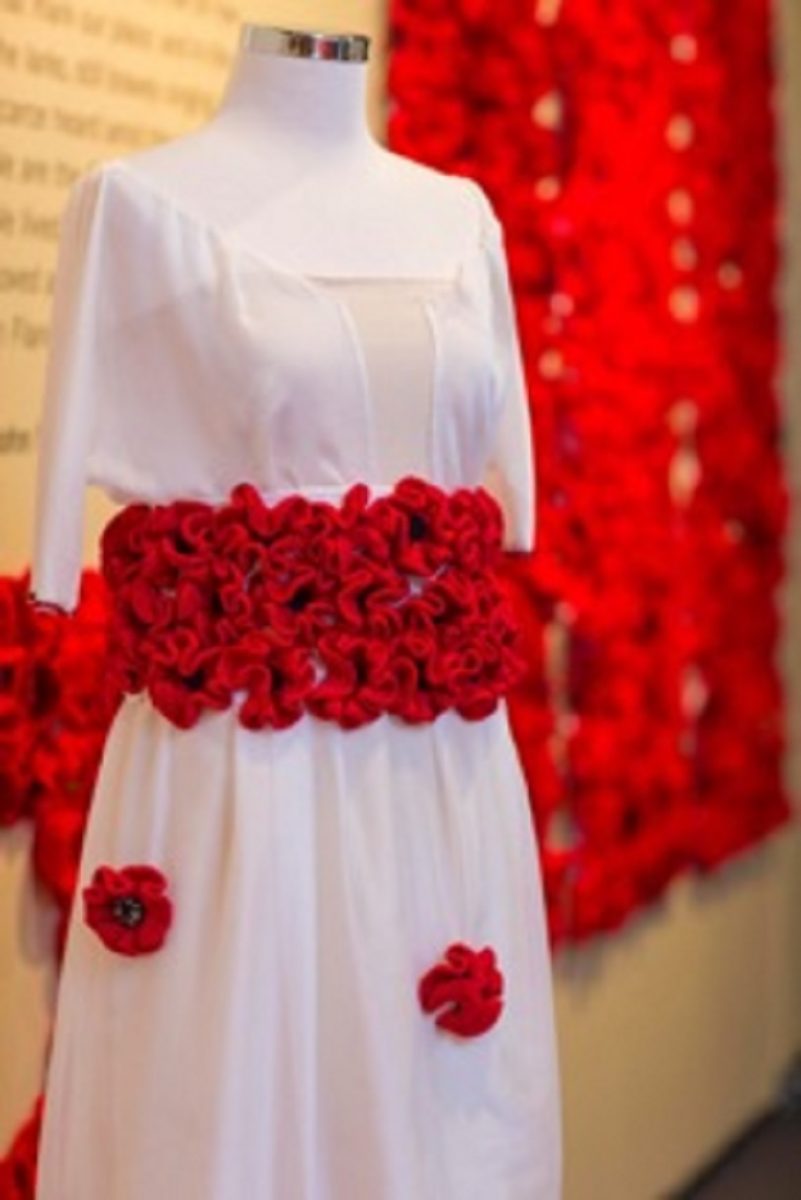 Regarding his overall experiences with the exhibitions, Mr. Baverstock says it’s “wonderful to tell the women’s stories in WWI and to see people moved by them.”

Mr. Baverstock can recount so many characters and stories but a particular favorite of his is that of Jane Sam.

“Jane Sam was a child prostitute on the streets of Grendel on NSW Goldfields. Sent to multiple correctional institutions, she escaped abuse by marrying a Chinese immigrant twenty years her senior. (They) went on to have 16 children and five of her sons and two grandsons went on to fight for Australia returning as heroes.”

The Women of Empire Exhibition and Vintage Fashion Rumble sale is on at the National Film and Sound Archive on:

Will you be visiting the ‘Women of Empire’ exhibition? Let us know by commenting below.

Such a short time frame for the exhibition which is a shame. But I plan on seeing it this week.

Linda we should go!

John Hurston, you've got to be kidding me! Talk about rotten timing.

My grandmother joined the women’s army in the UK and was in Rouen, France for two years. Not all women were nurses. There was a general section that would undertake non-medical work, such as cooking, cleaning and administrative roles. My grandmother worked in an officer’s club. Waitress likely. I have photographs of her in her uniform, and she had service medals.

Rebecca, Meagan, Kelly Can someone pleeeeease go and tell me all about it?!

Looks good Maddy! Meagan wanna go this weekend and we can report back to Mads?

Wish it was for longer and that there was one like this at the Australian War Memorial. Maybe AWM can pick up the ball once the National Film and Sound Archives have shown them the way.

It's only on for a week?

I remember going to the war memorial in canberra and asking an attendant where the women's section was. They said on the lower ground floor. I found it eventually. Behind a filing cabinet.

Wasnt too impressed with the invalidation of women the military services apparently thought of with women.

Good on you, national film and sound archive!

Looks great....it is telling that this exhibit is not being shown at the War Memorial. Is it because it is showcasing women's wartime achievements?

I think it's because these are "Costumes". That is, created outfits for the purposes of entertainment that were inspired by the fashion of the period. Recreations, rather than historical archive material that would see a place in the AWM. A display of "Costumes" would be a disservice to the purpose of the AWM if they were displayed there.

There are often exhibitions of non-historical non-archive material. There has been (and is) contemporary art displayed there, so I doubt that is the reason.

Martyn Noakes - 4 minutes ago
Brian Ashcroft have you been along the cycle track along the creek in Evatt and Flynn, huge eucs with deep roots in covered a... View
Chris Montgomery - 57 minutes ago
Brian Ashcroft they only blow over cause their root system is higher than they should be. Most eucs that blow over are on fro... View
Chris Montgomery - 1 hour ago
Gertraud Bell All the big Eucalyps were there before all the housing went in. So??? your saying to remove all native trees an... View
Sport 1

Capital Retro - 55 minutes ago
Will it be named after Sam Stosur? View
Community 46

Zoe Lewer - 56 minutes ago
Bob Foster yep. Us humans sure have made an impact. We are the problem. You are right. The day the people who were invaded ch... View
Joy Gosden - 1 hour ago
Yes. What were they thinking planting them in our suburbs. They drop limbs attract pests and stop grass growing around them.... View
Bob Foster - 1 hour ago
Another deluded hypocrite post Zoe Lewer 😂 I'm betting you live in a man made structure....made with either cut down trees... View
News 46

phydeaux - 1 hour ago
Buy the way TheSilver, I nearly forgot to mention this with regard to your supposed other scenario https://pubmed.ncbi.nlm.ni... View
phydeaux - 1 hour ago
A few points if I may, starting with your first post in this sub-thread where you start: ".... is literally no good evidence... View
TheSilver - 5 hours ago
Yes, I'm aware there are observational and laboratory studies. I am sceptical of those because it isn't obvious how transfera... View
News 1

@the_riotact @The_RiotACT
The ACT has recorded 620 new cases of #COVID-19 in the 24 hours to 8 pm yesterday. Of those, 61 people are in #hospital, with five in #ICU and one person requiring ventilation https://t.co/yrOFhW3j7d (52 minutes ago)

@the_riotact @The_RiotACT
#Moncrieff residents are pushing for the ACT Government to remove a #smelly and hazardous 'sludge pit' from their backyard. The petition has already attracted more than 400 signatures https://t.co/fW6ONtnb5f (59 minutes ago)