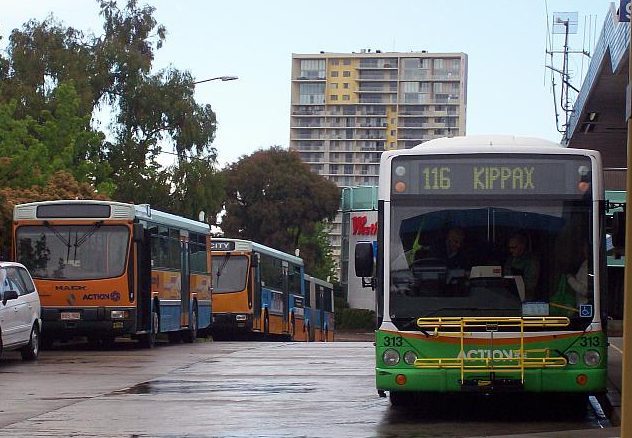 Work will soon start on preparing the Woden Interchange for its transformation into an integrated hub for both light rail Stage 2 and the bus network.

Chief Minister Andrew Barr will announce, as part of his State of the Territory address to the Canberra Business Chamber today, that Woden bus station would be significantly improved to accommodate better connections with a future light rail corridor, including new customer shelters and modern passenger information displays and ticketing machines.

The ACT Budget in June will allocate funding for detailed design work in 2019-20 and provision construction funding in the following years.

“The ACT Government is committed to bringing light rail from the city to Woden. While planning and approvals continue, we are doing what we can now to deliver this project as soon as possible”, the Chief Minister will tell the Chamber.

“Canberra is already better connected with our new network of light rail Stage One and more buses more often – this project is the next step in our public transport evolution.

“More people will move more often through a modern, safe, attractive public transport interchange in the heart of the Woden Town Centre.”

Pedestrians and cyclists will not be left out.

“We will continue to improve pedestrian and cycle access throughout the Woden Town Centre, ensuring Woden becomes an accessible transport hub for South Canberra,” he will tell the Chamber.

Detailed design will take place over the coming year alongside route planning for Stage 2 of light rail to Woden, with construction expected to commence from 2020-21.

“We’re already seeing Canberrans embracing light rail as a modern, frequent way to travel within our growing city,” she said.

“Investing in a new modern transport interchange will support the renewal of Woden as a destination to work, live, play and visit.

“We can see in the City Interchange how light rail combined with frequent bus services can help people connect and move with ease through our public transport network.”

Ms Fitzharris said work would begin shortly and the designs would be subject to community and stakeholder consultation.

Planning must include transport to The Canberra Hospital and consider shift hours. Parking there is impossible, and public transport is extremely difficult, particularly for sick people with no transport. One of the largest Govt employers in Woden. Staff work odd hours and often walk or catch the small amount of public transport in the dark or poorly lit areas. Parking fines are a regular occurence for staff, visitors seem to now able to appeal fines.

Pam Metz, it hasn't changed much since your time, but new things are coming!

Jean Fry - this must be what those fences we saw were about.

Restoring cancelled southside buses would be a good start. Barr and Rattenbury disappearing would be even better

Love it (genuinely), but should be extending it to Tuggers at the same time, right?

Has anyone timed the new tram service from Gunghalin to City yet?

And NO, we don’t want the next stage to go to Tuggeranong.

According to a report in the current Canberra Weekly it took 37 mins 45 secs for the tram to travel from Gungahlin to City in peak AM time and 34 mins 50 secs PM.

This is way slower than the claims made by Transport Canberra but no one seems bothered.

Barr won’t have time for the bus time table right now. He is too busy trying to figure out what to do about the petrol price gouging which he has just discovered is happening in Canberra and has for the last 25 years when Barr must have lived on a different planet.

Barr has never had time for anything rhat benrlefits Canberrans

Wouldn't it make more sense to wait until stage two actually gets approval before starting construction??

@The_RiotACT @The_RiotACT
How do you rate @Channel7’s coverage of the Tokyo Olympics? Given the circumstances, Tim Gavel, who's commentated at seven Olympics, says it's been remarkable https://t.co/YMoHbEE7Md (34 minutes ago)