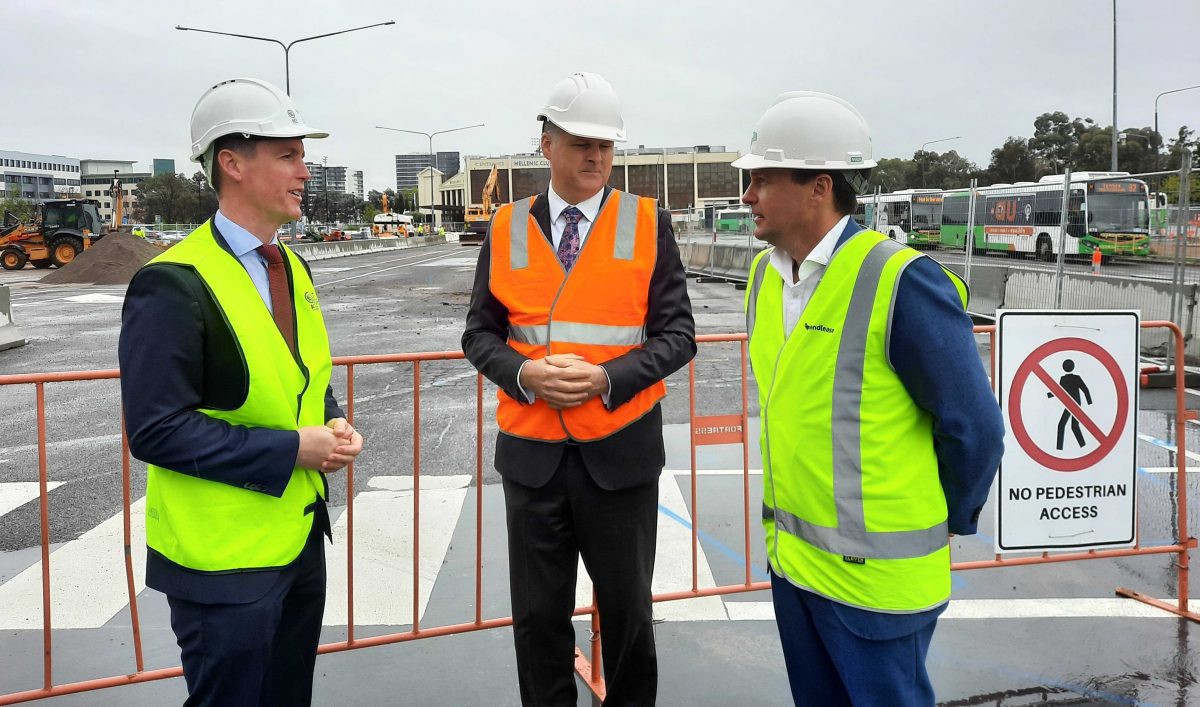 A new bus timetable will be in place from early next year to coincide with the opening of a new temporary Woden interchange as the old one is torn down to make way for the CIT project.

The new timetable will replace the interim pandemic timetable and use the full fleet and all drivers, including new recruits, but it will not simply be a restoration of the pre-COVID one.

Transport Minister Chris Steel said this morning (5 October) the new full timetable would kick in from the start of Term 1 next year with a focus on reliability and frequency, especially along the Rapid routes.

Speaking at a media event to make the start of work on the temporary interchange on the bus layovers next to Grand Central Towers, Mr Steel said the new timetable would take into account the impacts of traffic disruptions from major infrastructure projects on the southern entry to the city where Light Rail Stage 2A will be built, including the raising of London Circuit.

He said the timetable would also reflect community feedback the government had received.

Mr Steel would not say whether this would mean fewer services than those delivered by the pre-COVID timetable, given that more buses will be allocated to affected routes to ensure frequency.

“We will still be delivering a high level of frequency, particularly on those Rapid routes, but it will mean that we’re taking into account some congestion on the traffic network, which will add some time delays to buses running through the system,” he said.

“That means we need more buses to deliver the services that people expect. So we’ll be delivering high levels of frequency because we know that public transport will be a great way to move around the city during construction.

“For example, we expect there to be delays of around four minutes for buses heading from Woden into the city and that means we just need more buses to be able to move the frequency of service, so it will look a little bit different to what was in place prior to the interim network.”

READ ALSO Hot in the City: Dash-i into Edo Tori for an Express Lunch

Tuggeranong commuters, in particular, have felt shortchanged by the various timetable iterations, and Mr Steel said the pre-COVID changes such as peak services running into the city from Lanyon along the Monaro Highway and R5 rapid services from Lanyon through Erindale and around Woden would continue, along with tweaks based on community feedback.

He said there would be fewer bus layovers, for example, in Denman Prospect, and the R31 service would be extended into Lawson via a new roundabout. 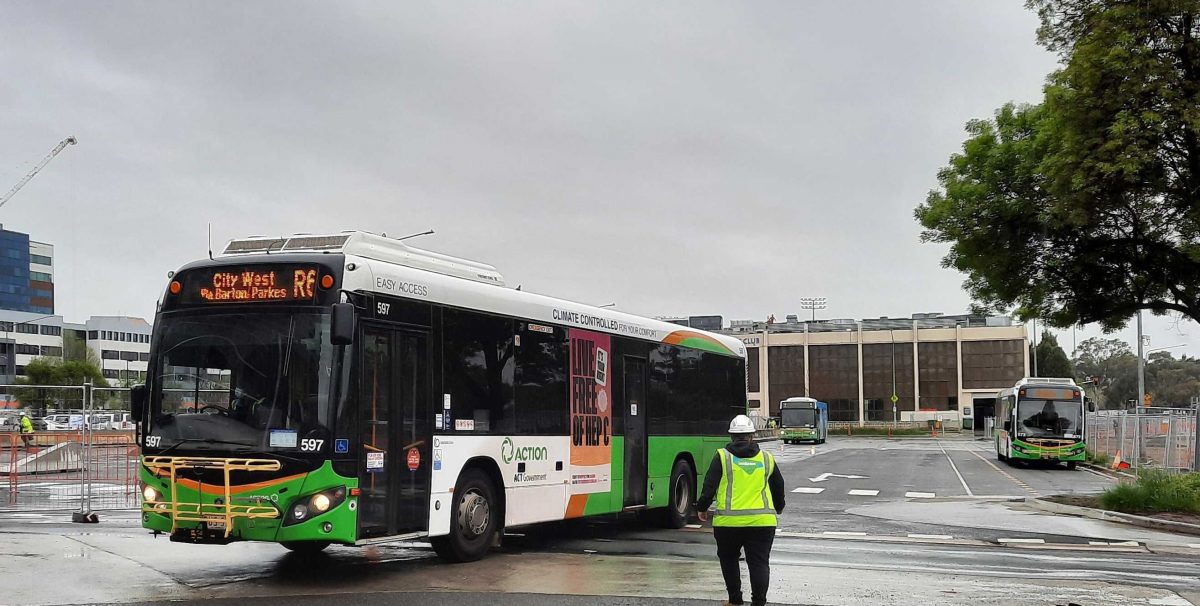 The current bus layover where the new interchange will be built.

Other changes include adjustments to Belconnen routes to allow the Fraser West terminus to be downgraded as per a community commitment, adjustments to Gungahlin routes to service schools and provide better access to Amaroo shops, and moving the pick up and set down from Brierly Street at Cooleman Court in Weston to the main stops on Parkinson Street.

There are also adjustments to account for use of the new Turner bus layover, adjustments to routing all peak services that travel over Commonwealth Avenue bridge to use the new Vernon Circle signals and Constitution Avenue, and adjustments to routes coming into the Woden Interchange to accommodate new platforms.

“It’s a new environment, and it’s a new timetable which reflects the conditions and reflects our priority which is delivering reliable transport services during this construction period,” Mr Steel said.

Chair of the Public Transport Association of Canberra, Ryan Hemsley, was cautiously optimistic.

“It’s great to see the government listening to the community and getting ready for the big build,” he said. “But what Canberrans really need is a return to more frequent buses.

“The Minister has hinted at some more frequent services, but if most of us only have a bus every half hour in peak, and every two hours on weekends, then we’re not moving away from the interim timetable.”

“You will have safe pedestrian connections north and south into the Westfield so it will operate just like any other interchange in Canberra, but it’ll be temporary and only be there for a couple of years of construction while we continue to build the brand new interchange,” he said.

“Importantly, we have also been building new bus layovers so they will be operational soon and will support the new temporary interchange as well.”

“Lendlease is really excited to work with the Territory Government to deliver world-class educational facilities and a transport interchange to support the revitalisation of Woden,” he said.

“Our team has been working really hard for several months on the design of the temporary interchange, but it’s always exciting as a new owner to see construction activities down on site, so today’s a significant milestone for the project.”

The temporary bus interchange will allow bus operations to continue into and out of Woden until construction on the new light rail-ready, public transport interchange is complete in 2025.

Mr Steel said the government was still in negotiations with Canberra Metro for Light Rail Stage 2 and expected a Works Approval to be lodged with the National Capital Authority by the end of the year, with procurement to be finalised in 2023.

The Minister has said the new network “would focus on reliability and frequency”, but limited that statement by saying “especially along the Rapid routes”.
With the trip to the City expected to take 4 minutes longer he intends to throw more buses into that section of the network to cope with the longer commute time.
If TC can only manage a 2-hourly service around the suburbs on weekends, I can’t see how they going to find the buses and drivers to cover these extra Rapids, without cutting services elsewhere?

Unless he addresses peoples concerns that peak hour bus trips to work have become slower than before the bus network change and that it’s now too far to walk to your nearest suburban bus stop, then his claim that the timetable update reflects community feedback are completely false.

Can we please find a journalist in Canberra willing to challenge Mr Steel’s ongoing media spin on things like the bus network and CIT procurement? I thought a media announcement event like this was meant to answer the media and inform the public, not just be used as a publicity stunt.

Will the Transport Minister finally address Tuggeranong and west Belconnen’s bus issues created by the 2019 network redesign? Or once again pretend they don’t exist and make some generic statements that count for nothing.

Even those people stridently defending the ACT government through those terrible public transport changes a few years ago, now seem to admit that some parts of the city were completely shortchanged and got worse bus services not better.