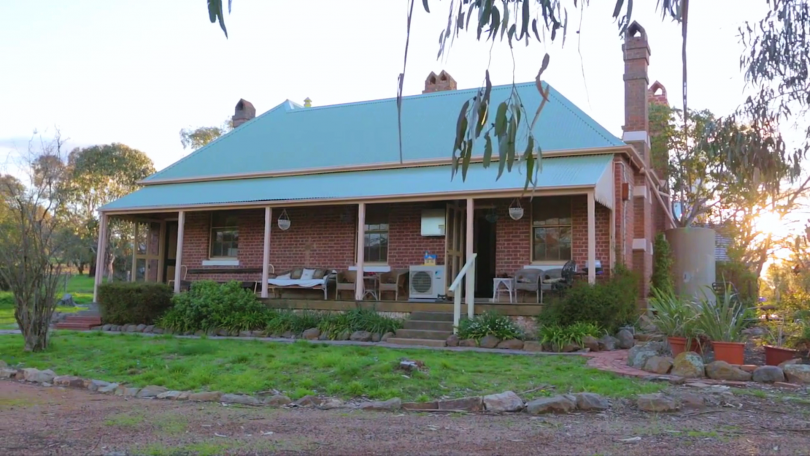 The Tuggeranong Schoolhouse Museum in Chisholm will be Working Bee’s first clean-up site on 14 October.

Tuggeranong real estate agent Rhys Summergreene has channelled his passion for history, heritage and the local environment into a new organisation to clean up and restore sites in his home patch in Canberra’s south, and he is calling on the local community to pitch in.

The Peter Blackshaw Tuggeranong sales representative said the agency was finding it challenging staying on top of all its community commitments so it decided to incorporate them into one project. Hence, Working Bee was born.

The idea was that once a month the agency would lead the clean-up of a particular site, the first of which is the 1880 Tuggeranong Schoolhouse Museum in Chisholm on 14 October.

“It’s covered in blackberry bushes and all this undergrowth is destroying the significance of it. There are really old trees and plants, so we’re going to go and landscape it for free,” Rhys said.

Rhys also has ambitions beyond his own backyard. “There are tonnes of places around Canberra that have got historical relevance and are covered with old tyres and God knows what sitting in the soil,” he said.

Last year he sold a 160-year-old farm at Belconnen and learned about all the old rural and Indigenous sites and other important places. “Even if it’s a grinding stone from the Ngunnawal people, it’s all relevant and important,” he said.

“I have an almanac of every important site to follow through one by one.”

He has been in touch with the National Trust but is hoping local communities turn out to support Working Bee and also ‘raise awareness so historical sites don’t get lost in history like a lot of other Canberra relics’.

The Tuggeranong Schoolhouse Museum is dear to Rhys’s heart, and curator Elizabeth Burness – who also gives time to other community groups – has been an inspiration.

“But I also live in Tuggeranong and grew up here and I’ve done lots of bushwalking and it really does make me angry that the environment has been treated so poorly,” he said.

He and his colleagues have applied their marketing skills to set up a Facebook page, create logos and produce leaflets to letterboxes. They are also drawing on Peter Blackshaw business connections for sponsorship.

“We’re calling on all the residents of those surrounding suburbs to just come along with a garden trowel, garden gloves, sunscreen and hat to dig deep – literally,” he said. “It’s a great way to meet people in your suburb.”

They are also calling on people to donate any English plants that they may have to restore in the Schoolhouse’s cottage gardens.

Rhys said people could also suggest sites in need of attention. “I would absolutely love suggestions because that would show me that they care,” he said.

For more information go to www.facebook.com/workingbeecanberra

What do you think of Rhys’s initiative? Let us know your thoughts by commenting below.

Stephen Saunders - 11 minutes ago
Look, I don't oppose this, it can never be remembered too often. But the first priority that needs it own Canberra memorial i... View
News 17

chewy14 - 14 minutes ago
Ha, that should read uninformed, not uninformed. BJ, on that link you've provided, have you actually read the ICRC report on... View
chewy14 - 31 minutes ago
No, To be honest, It's because I think you're uniformed on the scope and causes of the problem, the research that has been oc... View
bj_ACT - 2 hours ago
I’m not just criticising this project from 2014, I’m criticising two decades of broken promises, failed projects and the... View
News 199

Jess Thomas - 17 minutes ago
David Deb Cossart that's the thing: people who can afford the fine can afford to speed. Changing this would mean that no-one... View
Liam Searle - 56 minutes ago
Make the speed limit suit the road, change it back to 60! View
AliciaAnn Dowd - 4 hours ago
Werner Schenk I agree with you. There is already a system in place to assist people manage payment of their fines. SPER allow... View
Community 41

Sam Oak - 38 minutes ago
The government needs to stop fluffing about trying to figure out how to get the tram over the lake and build the Belconnen to... View
Community 10

@the_riotact @The_RiotACT
The announcement of a new national Holocaust #museum in #Canberra comes in the wake of a report that reveals almost one in four Australians over 18 has "little to no knowledge" of the #Holocaust https://t.co/ojjuaIjCrz (36 minutes ago)