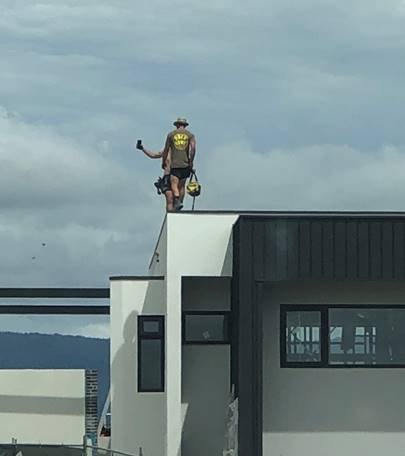 WorkSafe has continued its blitz on workplace safety in Denman Prospect. Photo: Supplied.

More than a dozen construction sites in Denman Prospect were shut down last week after WorkSafe inspectors visited 21 sites in the suburb and issued 41 improvement notices and four infringement notices.

Scaffolding safety was a major issue with workers operating at height without fall protection, using unsafe scaffolding and ladders to support single planks.

The 3 December crackdown followed a similar inspection blitz in August when WorkSafe visited over 60 sites and issued about 16 prohibition notices, 35 improvement notices and one infringement.

“It is time for the industry to get real about safety and stop cutting corners so every worker can go home safely at the end of their shift.”

Since the blitz last week, WorkSafe ACT has noted that some of the prohibition notices at Denman Prospect have been complied with; however, a spokesperson said an “exact number of those that have been deemed compliant” is not available at this time.

“We will continue visiting and re-visiting greenfield sites across Canberra and we will be making sure that workers WHS obligations are complied with,” Commissioner Agius said.

For more information on safety relating to the building and construction industry, visit the WorkSafe ACT website.

If they’re willing to take those shortcuts with the safety of their own lives, I shudder to think of the shortcuts being taken on build quality.
After spending a weekend viewing the displays homes currently open at Denman, you can see first hand the lack of quality builds and craftsmanship on these multi-million dollar homes.