ACT WorkSafe Commissioner Jacqueline Agius has been in the job for six months but is motivated by the scars from a serious workplace incident more than 25 years ago to ensure compliance with work, health and safety laws so other workers aren’t at risk.

“It was a serious occupational violence incident,” Ms Agius told Region Media, recalling a knife attack incident during her days as a teacher.

“It was a long time ago and I’ve moved on from it, but it definitely informs my passion and commitment to work, health and safety.”

Hearing the news of a speed detection van being shot at by a passing motorist earlier this week also sent shivers through the organisation which is responsible for the safety of all workers in the ACT.

After moving from a senior role in the ACT’s education union to become the WorkSafe Commissioner in April, Ms Agius is also calling on her career as a criminal lawyer to enforce non-compliance issues in the workplace, particularly in the construction industry.

It follows the death of a 60-year-old man who fell while on a construction site at Denman Prospect in February.

Ms Agius said while an increase in funding to $8.7 million over four years will help WorkSafe ACT’s respond to Canberra’s growing workforce, more tools are needed so that the workplace watchdog has the teeth to act.

“This level of non-compliance with work health and safety is just not good enough. The industry has been on notice since February and we have given them plenty of warning that we will issue notices and fines to anyone who disregards safety standards,” Ms Agius said.

“In September and October, we have visited residential construction sites in Watson, Ginninderry and now Taylor, and issued almost 100 notices due to safety issues in these locations.

“We continue to see the same issues at residential construction sites across the territory, including scaffolding safety and risk of falls from heights, site security, poor housekeeping and a lack of basic facilities like toilets for workers.

“It’s time for the residential construction industry to lift its game and improve health and safety standards for all workers, so they can go home safely at the end of their shift.”

“A big part of this job is going out with the inspectors to understand the work they do. As I’m going to make decisions about how we move forward, I have visited a number of construction sites, commercial, civil and residential. Whenever we do a large-scale residential audit, I’m involved in that and have spoken with workers on those sites,” she says. 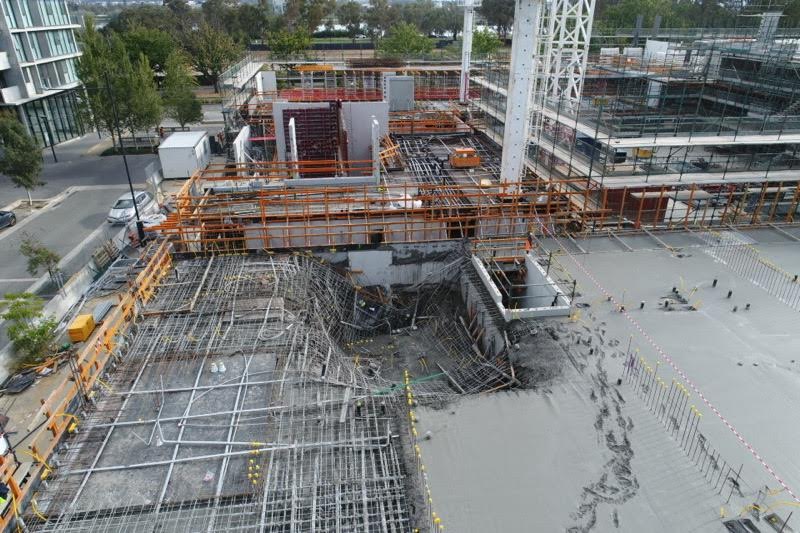 A construction site in Campbell was shut down after a temporary structure collapsed during a concrete pour in March this year. Photo: Supplied.

They have told her there needs to be more inspectors, an increase in regulatory support staff including data analysts and communication specialists, as well as financial, human resources, governance support and additional support for the already existing psychosocial health officer.

“Pyschosocial issues exist where a young worker may be told to climb scaffolding without proper safety equipment, or a hospitality worker being subject to abusive superiors. These issues can have extremely detrimental effects on workers,” Ms Agius said.

“Our laws are based on model legislation that makes it hard to move too far from what the legislation says. I would like to make some recommendations to the incoming government so we see enhanced laws around infringements in areas like housekeeping and construction where we can issue on-the-spot fines. We don’t have that power at the moment.”

WorkSafe ACT is running an ongoing campaign called Operation Safe Prospect to improve safety in the residential construction industry after continued breaches, but a safety culture needs cooperation from every worker.

“Changing culture definitely takes time and WorkSafe alone is not going to be able to create a work, health and safety culture. We need to work together so that industry, unions and the government and employees are all on the same page. When that happens, we will get it right.

“We all have the same goal of keeping people safe in the workplace and making sure they go home at the end of the day safe, too.”