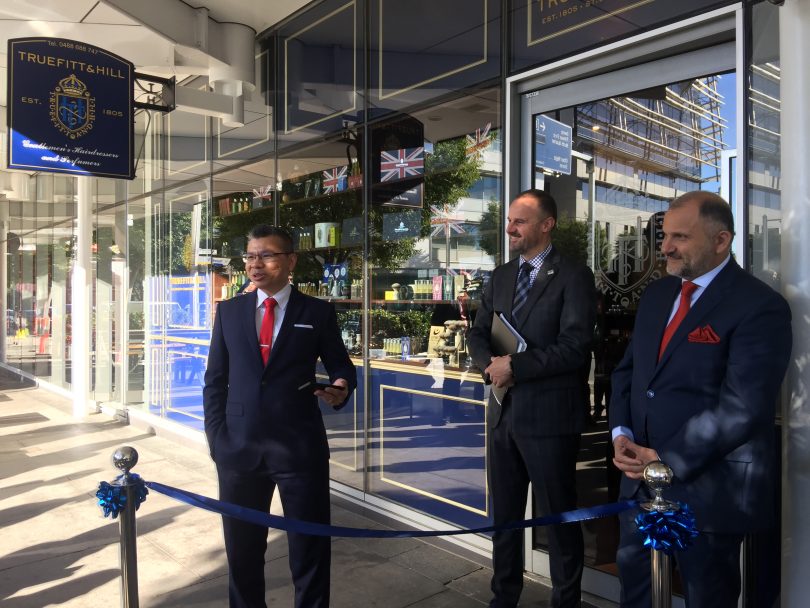 What strange times we live in. On Thursday, the ACT Chief Minister, opened a ‘men’s only’ barber shop on International Women’s Day.

At first, we thought the media release we received at The RiotACT was a bit of a cheeky prank – but no, The Chief Minister, actually launched Truefitt & Hill’s new barber shop in Canberra, on Thursday morning – International Women’s Day.

So, in for a penny, in for a pound, we decided to cover the opening of the over 200-year-old, now barber shop franchise. And to make it more interesting The RiotACT did a Facebook Live whilst I had a shave and conducted an interview with the Canberra owner Mr Khushwant Dhanoa (KD for short).

Whilst undertaking a wonderful hot double shave I asked KD whether it was actually ‘men only’. He replied that it was, but they had had some enquiries from women that were looking for men’s styled haircuts and that they could be accommodated on request. So there you go, not really ‘men only’ – and a very sensible response …

He also said Canberra was chosen as the first location for a Truefitt & Hill barber shop in Australia because he loved Canberra, the very favourable demographics, public service, Federal Parliament and the foreign embassies and their staff.

But, he was quick to comment that, although they are Royal Warrant holders to the His Royal Highness the Duke of Edinburgh, Truefitt & Hill is open to all and not just the top end of town.

I was also informed, though, that His Royal Highness doesn’t visit the Truefitt & Hill in London, they go to the palace …

I was interested to know if a men’s barber shop would catch on in Canberra.

Rohan, my barber, who gave me an excellent shave, said ‘absolutely’ because ‘men wanted to be men these days and not go to a women’s salon to get their hair cut’.

I must admit that I usually get my hair cut in the local ‘salon’ and haven’t had a problem with it. Although, I have asked them, from time to time, about possibly getting a hot shave and their response has been that there are additional issues that come into play when you take sharp razors to peoples throats…

So, what is so special about another barber shop opening in Canberra?

Well, it isn’t any old barber shop. Established in 1805, Truefitt & Hill is recognised as the world’s oldest barber shop by the Guinness Book of World Records.

Khushwant Dhanoa, Director, Truefitt & Hill Canberra said, “The luxury market and men’s grooming services are both segments that are burgeoning in Australia, with many big brands typically concentrating on the major, big cities. I selected Canberra for the first Truefitt & Hill outlet in Australia because Canberra is a progressive, diverse, wealthy, cosmopolitan city with immense potential and exceptional quality of life.”

I have to say, if you want to get away from it all, and relax, have a drink, a haircut or a shave, manicure or pedicure, then this is one barber shop you might like to visit. I’m sure it will be a big hit with all walks of Canberrans, from politicians to diplomats, hipsters and the rest of us common folk.

Truefitt & Hill Canberra is located on Genge Street in Civic, between the bustling Canberra Centre and Braddon.

Are they aware, welcoming and respectful for trans masculine folks too?

Atte 👌🏻treat yo self

Marcus Wellby have you been yet?

Michael Burt is this what you were talking about today?

Do they do mullets?

Judi Pearce - 37 minutes ago
Thanks to this special lady ! I have one of these blankets exactly as pictured. My dear mother (Ollie Dyball) purchased it fo... View
Opinion 29

Grant Hunter - 2 hours ago
Julie Macklin lots of people aren’t jabbed Brownshirt View
Julie Macklin - 3 hours ago
Susan Williams Are you not vaccinated? Vaccinated people mostly don't have a problem with this; only the unvaccinated. It's a... View
Michael McDonald - 5 hours ago
Meegan Ward Well said. View
Property 1

Creating space for a whiskey, a chat and a close shave