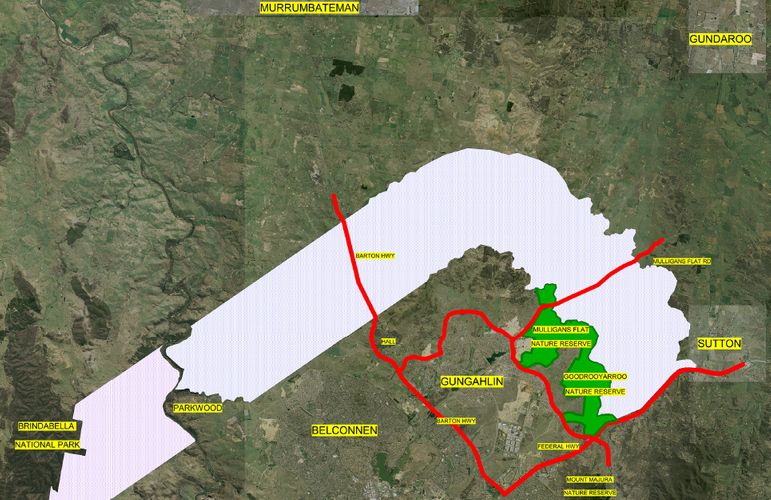 Nervous landholders just across the border in NSW are worried about possible government arrangements that will see them lose effective control of their properties, undermine land values and curtail rural development options.

They are also concerned that urban development spreading from Canberra will destroy the character of the cross-border lands, arguing that a more sustainable approach would be to have small rural lots supporting new forms of agriculture to supply the ACT market.

The 5km ACT NSW Border Planning Group is worried about the lack of consultation and information on the issue and is holding a public meeting on Sunday 24 February at Sutton Hall, with former ACT Chief Minister Jon Stanhope listed as one of the speakers.

The group fears Yass Valley Council’s 20-year, 5km-wide buffer zone for the border, except for the Ginninderry housing development, will suppress the value of land and limit subdivision.

They believe Yass Valley Council would be able to resume their land at rock-bottom prices, due to the land being assessed at rural use only, when it does decide to pursue urban development along the border, which is supported by the NSW Government’s South East and Tablelands Regional Plan.

The NSW Government had originally rejected the buffer zone proposal but it has now thrown its support behind the council, which argues that it does not want urban encroachment on the border that it cannot service.

The group is also concerned that the border may be moved so the council could swap the land for permanent ACT water access for Murrumbateman and Yass, which has had supply issues in previous droughts and continues to struggle with poor water quality.

Mr Stanhope will speak on the political and legal constraints on moving the border.

The group believes the ACT Government, a joint venture partner in the Ginninderry housing development and reliant on land sale revenue, is ‘conflicted about wanting to protect nature reserves, retaining the rural landscape as well as having a seamless transition to rural NSW landscapes at the same time agreeing it should be urbanised’, according to member Arnold Dekker.

The landowners’ vision for the area along the border is for a ‘low-density rural-residential zone that would focus on the environment, heritage, economic and social benefits consistent with peri-urban developments around other cities’.

Long-time landholder Bill Ginn said the Council was being inconsistent to seek a buffer zone but also reject rural residential on the grounds that the South East and Tablelands Regional Plan says rural residential should not be allowed in the border area as it would interfere with future urban development.

He says there is already a precedent for cross-border development in Ginninderry, previously known as Parkwood.

Mr Ginn says there is currently no real agriculture in the border zone and small acreages could be sustainable and self-sufficient, and attractive to people in Canberra sitting in expensive houses and apartments.

“It’s the uncertainty for the landowners, but we also need to look at the broader community. How is this benefiting anyone? You’re ticking the box for more high-density housing in Parkwoood but you can’t give people a bit of alternative development or living environment,” Mr Ginn said.

The Council says the buffer is partly to maintain a clear separation between Canberra and existing Yass Valley settlements. It does allow landholders to undertake development and subdivision as per its rural zoning, with a minimum lot size of 40 hectares, but the landowner group says this is too large.

A Council spokesperson said Parkwood/Ginninderry was the only growth area identified along the NSW/ACT border for urban growth due to its unique geographic characteristics and physical isolation due to Ginninderra Creek and the Murrumbidgee River.

“Any Yass Valley development located adjacent to the border has complex servicing, infrastructure and governance issues, and relies entirely on the ACT,” the spokesperson said.

“As there is no geographic containment (like Parkwood) it could result in uncontrolled sprawl of development.”

The spokesperson said that Council continually received pressure for development adjacent to the border, which was the main reason why the Yass Valley Settlement Strategy addressed this issue.

One of the key elements of the Strategy was to direct this growth into the existing settlements of Murrumbateman and Yass, as well as Parkwood.

The spokesperson said the Settlement Strategy did provide certainty to landowners, and most people who had moved to the Yass valley for lifestyle and rural reasons supported it.

“Land value should be based on the current zoning and land use, however it appears that values have been artificially inflated in this area due to an expectation of future development,” the spokesperson said.

It did not plan to resume land for any urban development along the border.

Other speakers include Trevor Fitzpatrick from Purdon Planning to discuss the best use of land in a peri-urban zone such as along the ACT-NSW border. Yass Mayor Rowena Abbey will also attend. The meeting starts at 4 pm.

“Nervous landholders just across the border in NSW are worried about possible government arrangements that will see them lose effective control of their properties, undermine land values and curtail rural development options.”

None of this land is now nor ever has been zoned for urban development, so any loss in land value is simply a loss of the speculative market value of people hoping that they can convince the government to allow them to subdivide or create piecemeal urban developments on the land.

This is one of the rare occasions where people are actually considering the wider issues of development in the region.

Nick Swain - 47 minutes ago
This business proposal was totally inappropriate for Fyshwick. They would have killed many Fyshwick businesses by clogging up... View
simm - 50 minutes ago
A giant fragmentising metal shredder is not the right idea for any built up area. . Other states stipulate a 1200 meter Separ... View
Shayne Borger - 12 hours ago
This council is killing Canberra and business with initiative View
News 1

nobody - 51 minutes ago
The regime have made a FUBAR of this. View
Property 24

Capital Retro - 1 hour ago
It is timely to revisit what happened in the USA 11 years ago because with speculation that there will be government guarante... View
Acton - 2 hours ago
Low interest rates mean people borrow more. Large loans means people have more money to spend and higher buyer demand pushs u... View
Food & Wine 4

Amanda Fisher - 2 hours ago
My son goes into Dalton school once a week for shared learning programs and he raves about what they’ve done that day all a... View
Community 3

It was the backdrop for a Game of Thrones-style wedding filmed for Seven Network's television series, Extreme Weddings; it featured in...
Courts & Crime 1

‘A borderless community’: how ACT could run Ginninderry’s policing, waste

@The_RiotACT @The_RiotACT
Situated 75km north of Canberra, Dalton is a tranquil village where the locals' sense of community is strong https://t.co/5mMmlSPOc8 (2 hours ago)

@The_RiotACT @The_RiotACT
How would you respond to evil? Would you take it on, or turn away? A German Life, opening in Canberra on 11 May with Robyn Nevin, asks uncomfortable questions for us all https://t.co/0eoGcsL8q6 (12 hours ago)