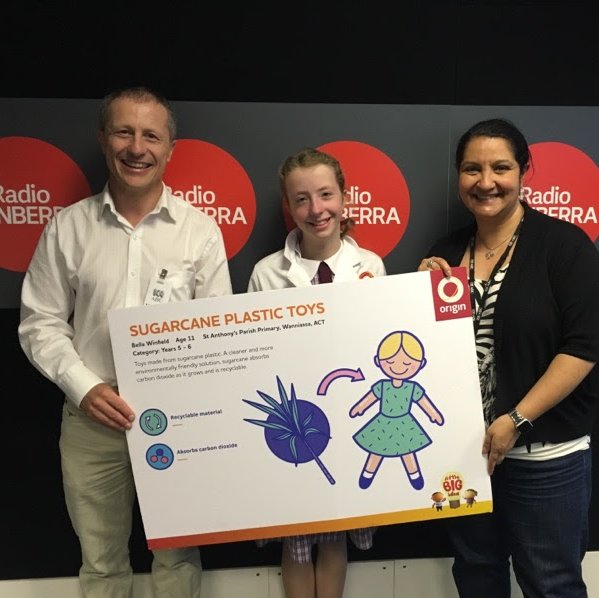 Eleven-year-old Bella Winfield has made Canberra proud by clinching one of three winning positions and a trip to NASA for her innovative entry into a national competition.

Bella entered the ‘Origin‘s Little Big Ideas competition’ with an invention idea to produce children’s toys using sugarcane ethanol, which is biodegradable and therefore eco-sensitive. Her idea impressed the judges enough to secure her the winning invention title in the Grade 5-6 category, which includes a trip to NASA in the United States.

Her little big idea was inspired when her school, St Anthony’s Parish Primary in Wanniassa, received a stock of sugarcane plastic water bottles. She wondered then if she could expand on this concept and apply it to the production of plastic toys as well.

Bella’s parents surprised her when they attended the school assembly where she donned a lab coat and was subsequently told she had won the competition in her category.

“I’m really over the moon and excited because I never really thought I would win,” said an elated Bella. She also said she was looking forward to asking the people at NASA “fun facts about the planets”.

She said that her sugarcane plastic toy idea merged her interest in toys, the environment, and design.

The Judges of the competition said that Bella was “incredibly brilliant” in thinking of a practical solution for a such a big issue.

Bella’s entry was one of the thousands that were reviewed as part of the competition.

Do you know any other young innovators in Canberra who deserve recognition? How else can we encourage and support children to be more engaged in science and innovation? Let us know by commenting below.