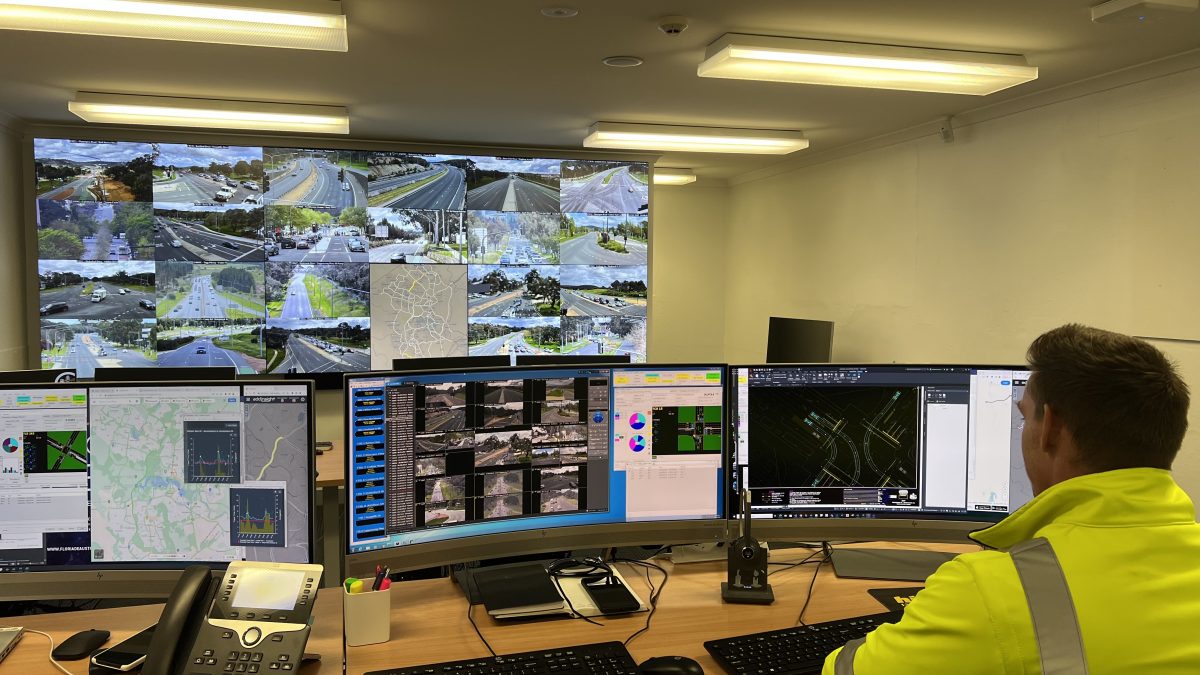 Behind the scenes of the traffic monitoring of the Territory’s roads. Photo: Lottie Twyford.

You’re also being sniffed out.

Okay, it’s not really that creepy.

The team at Transport Canberra has a network of 70 CCTV cameras located at key intersections in the Territory.

Those cameras are used to monitor traffic flow, congestion and incidents. 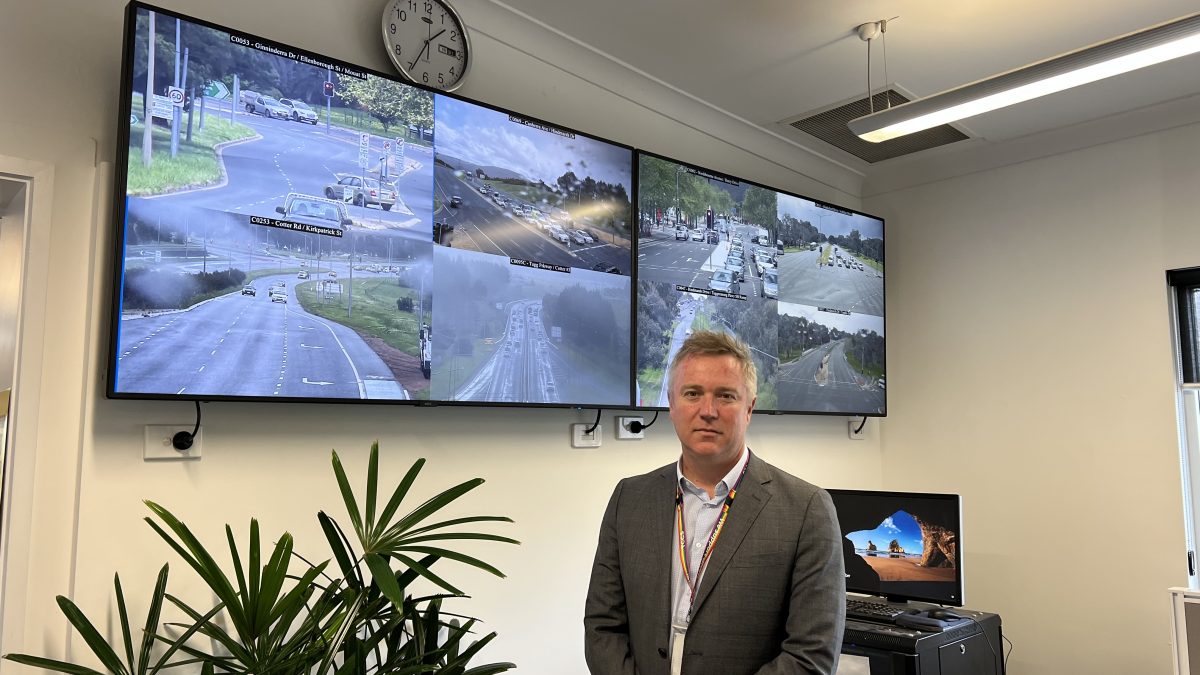 Executive branch manager of Roads ACT Tim Rampton said they had been placed in strategic locations that had historically been accident-prone or experienced high traffic volumes.

“The technology is used to provide information to commuters before they get into their car and also while they are in the car to influence the way people travel,” he said.

Then again, the cameras can sometimes be used for other purposes.

For example, the team was able to identify some potholes on the Tuggeranong Parkway a couple of weeks ago because they saw unusual activity, with multiple vehicles pulling over in the same spot.

When an accident does happen, the traffic operations team is able to spring into action immediately.

Mr Rampton said the primary benefit of Roads ACT having their own feed was simply this – they could get there quicker.

Previously, they would have sent a ground crew out to double check what was really going on or waited to be notified by emergency services and first responders of an accident.

This response can be varied.

Sometimes this means manipulating traffic lights, changing variable messaging signs or redirecting traffic to avoid an area – although the latter is not always possible.

It means they can work immediately with emergency services and first responders.

He stressed the video the team was looking at through the multiple video feeds wasn’t able to be used for any other purposes.

It’s not recorded, nor is it stored, and police and emergency services aren’t able to access the feeds, even if they really want to.

The video is also not able to be used for insurance claims, for example.

Privacy concerns also mean digital “privacy screens” are also used if there’s any chance of the cameras feeding video in from a private location such as a house.

The video-monitoring team has recently been expanded so video monitoring can take place from 7 am to 7 pm.

Partly, that’s due to an expectation that as the raising of London Circuit gets underway, the operations team’s jobs are going to get even busier.

Eagle eyes will be watching key intersections around the city centre to ensure this is working well and cars are going the right way.

It’s not just cameras helping crews on the ACT’s roads. They’ve also got around 180 devices known as “Bluetooth sniffers”, which are also installed in strategic locations around Canberra.

These don’t provide a visual feed. Instead, they provide real-time information about commute times and congestion.

Sniffers operate by picking up a Bluetooth-enabled device such as a car or a phone in a car and registering its MAC address.

When that device passes another sniffer, it’s picked up again and information is fed back to the operations team about how long it took that vehicle to get there.

Sometimes, multiple sniffers will be installed on the same road so the team can narrow down where particular incidents or congestions are occurring.

That data is also encrypted and deleted as soon as it has been used for gathering the information needed.

Transport Minister Chris Steel said last month if people were concerned about being picked up on the sniffers they could simply turn their Bluetooth off.

Thirty additional cameras and 40 Bluetooth sniffers are being procured by the Government.

Three more movable variable messaging signs are also on the way, to take the total to nine across the Territory.

It’s hoped they will all be online in the coming months.

Turn off your Bluetooth? I prefer to use it for hands free.

In my view they are either failing to maintain induction loops at traffic lights or deliberately changing them to delay traffic. Numerous intersections now allow only three cars to turn before changing. This encourages yellow light running, more rotations. More rotations means more times the lights are all red. It’s happening all over Canberra.

When are we going to get some feedback about the success of the mobile detection cameras: https://the-riotact.com/mobile-detection-cameras-imminent-for-act-as-new-law-passes/471139

They don’t do it by synchronising traffic lights like most decent sized cities.

Are they watching the freakin pot holes???

Thanks The Riotact I have been asking this question. Be nice to be able to get a live feed same as in Sydney Melbourne etc.

Interesting. I would be interested in knowing where they are and if you can give live info before heading to work etc.

It is a pity they only concentrate on moving traffic. Buses get no priority in the ACT (unlike Sydney) and they carry many more people. Also pedestrians get a poor deal trying to cross the Light Rail corridor.

I wonder if they can see the potholes and collapsed roads from all these cameras….

Most modern cars have Bluetooth radios that you can’t fully turn off, so the suggested solution for opting out won’t work for a lot of people.

Woody Brenden government: you can opt out any time u like buy not driving on the tax payers roads that once built we declare as ours so we can police them and make billions form the people that payed for them we are watching ohh I was ment to put somethings about it’s for safety for legal reasons