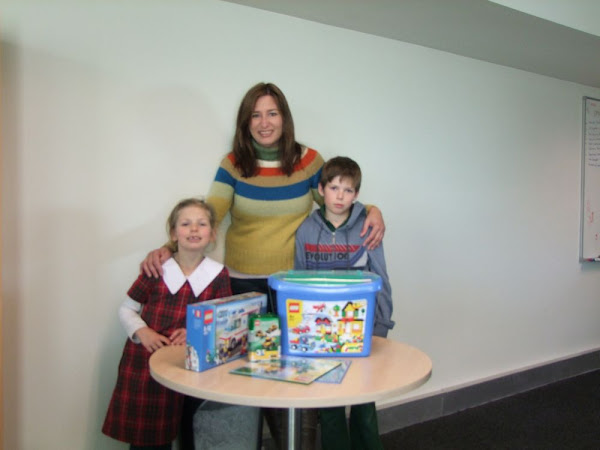 The Lego Challenge is going strong with the ladies now receiving a second representative in Yvette Berry.

Yvette and kids came by with ambulances, cars, and base plates, which are the foundations of any decent Lego construction.

So far the donating tally is Two Liberal, Four Labor, Two members of the public (Thank you Ayrton and Penelope), One Green and no minor parties.

Yet. We’ll let you know!

(PS, time is running out to contribute. Any lego not lodged by 31 July isn’t going into the lego box of destiny, contact form is on the top right under “I want to”)

Should we pass around the hat for the poor photographer with the crappy lens?

Ah, don’t blame the camera, it’s excellent. I do however accept full blame as the ‘poor photographer’. And in regards to the lad: I had the impression he was just too cool to smile on camera.

Just to correct the URL:
http://www.yvetteberry.com.au/

‘Mum, shouldn’t we be in school instead of being electoral props?’

It was after school

Should we pass around the hat for the poor photographer with the crappy lens?

Yeah, give the lad his lego back!

‘Mum, shouldn’t we be in school instead of being electoral props?’

She didn’t steal it from her little boy did she? He looks a tad unimpressed…

Hahaha! I was thinking the same thing! 🙂

She didn’t steal it from her little boy did she? He looks a tad unimpressed.

But she’s delivering on infrastructure. (Makes a change…)

Dan Cope - 20 minutes ago
👏 well done Emma. View
Alexandra Mary - 52 minutes ago
Jaimie-Lee Peattie it is! So awesome to see more being set up View
Montana ONeill - 2 hours ago
This is good to see and hopefully it grows throughout the region to other areas💙 View
Opinion 51

@the_riotact @The_RiotACT
A new Senate report is calling for changes to Australian Public Service outsourcing, with one Senator describing it as a world of opaque contracts, rent seekers, shadow workforces and 'sleazy Canberra deals' https://t.co/KB17Gr1YvB (55 minutes ago)