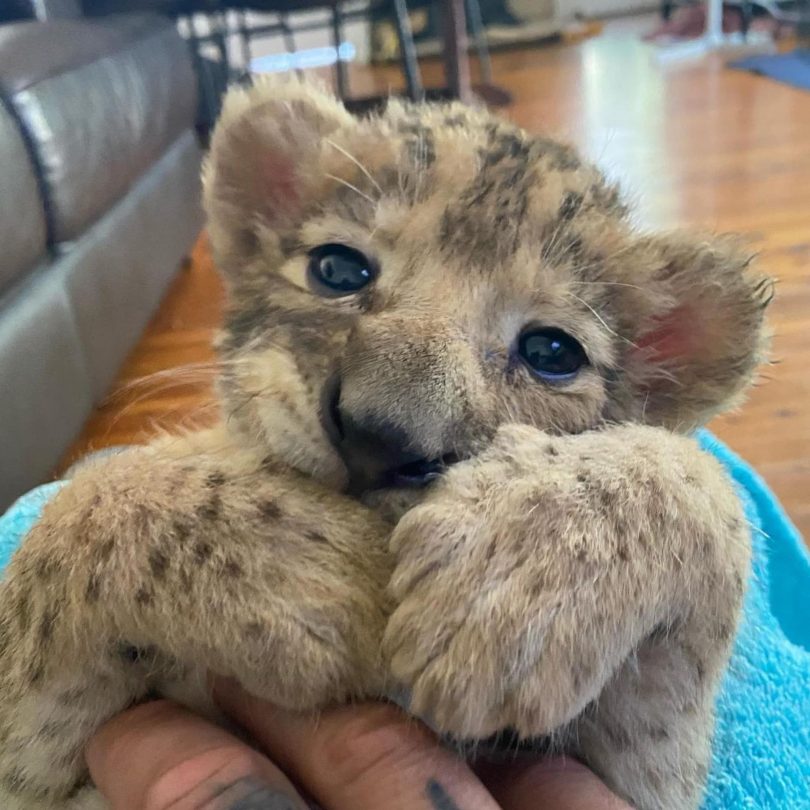 Mogo zookeeper Chad Staples has shared his pain at losing one of the two lion cubs he’s been hand-raising since the death of their mother more than a month ago.

The seven-year-old lioness gave birth to two healthy cubs on 8 December, but a third cub was born dead and a fourth couldn’t be delivered naturally.

Zoo staff carried out an emergency caesarian to try and save the cub, however it had already died and caused severe internal rupturing to Zuri due to its size and positioning.

It was a terrible blow for zookeeper Chad, who stepped up to play mum for the remaining cubs, feeding them every two hours, day and night.

Earlier this week Chad spoke of the hard work involved in the task, and of the joy of watching the cubs’ personalities develop.

“Like anyone who’s looked after a baby or cared for anything young, you feel like you’re living on fumes, but it’s the most rewarding thing you’ll ever do,” he said.

Chad named one Moto, meaning fire and the other Maji, meaning water.

“I wanted names that worked as a pair and paid tribute to the cubs’ heritage,” Chad said.

“Death, unfortunately, can be treated as a bit of a taboo in zoos,” he said in a Facebook tribute.

“It can often be a difficult story to explain, especially the amount of times we really never get to the bottom of ‘why’. But we can’t have the amazing joy of birth and babies without also having end of life.

“The last couple of days have dealt me two horrible blows. Moto … passed away very suddenly just before her lunch time feed two days ago after a spontaneous seizure.

“And now … Ngukurr our stunning old boy crocodile succumbed to a stomach tumour and passed away this morning.

“These moments are beyond hard.

“Moto passing at the very start of her life, with her autopsy so far telling us no more than she was a completely healthy cub.

“Ngukurr’s death is hard in another way. I’m thankful he had such a long life and I’ve had the privilege for caring for him for almost 25 years.

“As much as I’d like to hide away from these moments, I believe they need to be shared so that grieving can be done communally. This way we can celebrate the time we spent with these amazing creatures, whether it was for a long time or tragically too short.

“Death is hard, but easier if we walk through it together.”