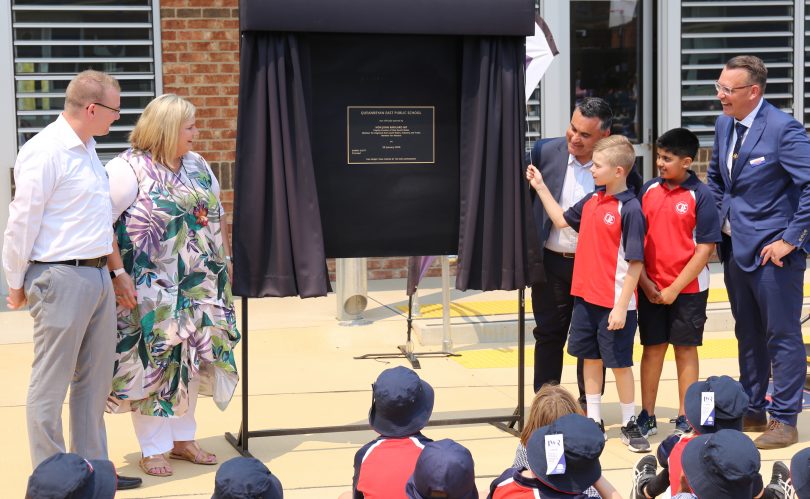 “To have such a significant build in a country area such as Queanbeyan is wonderful.

“The upgrades are nothing short of extraordinary and this has cemented us as being able to teach and learn in a way that drives future-focused learning.”

The school now boasts 11 new classrooms, a new covered outdoor learning area and a new canteen, while upgrades have been made to the library, administration areas and toilets.

“It’s also the additional spaces which make this upgrade so special.

“There is a forum room that can hold 60-plus students, there is a special programs room that can be used as a dance space for creative and performing arts. There are half a dozen rooms for small learning areas. There are two maker spaces that are designed for things like robotics.”

Mr Scott said the infrastructure of the school has also been enhanced to the latest standards.

“There are solar panels which are currently producing 120 per cent of the school’s electricity, so we’re actually putting power back into the system.”

Member for Monaro John Barilaro officially opened the upgrade last week and said the changes will benefit generations to come.

“I am so excited to join students, teachers and staff to officially open these new facilities, which will help deliver the high-quality education our children need to succeed now and in the future,” he said.

“It is great to see all the smiling faces, as students step foot in their new classrooms and take in all the new amenities on offer.

“Queanbeyan East, like many communities across the Monaro, is growing and it needed a school to meet those needs.

“This upgrade has achieved exactly that, and our children can continue to learn in the very best facilities available.”

“In the past 12 months we have completed 42 school infrastructure projects, representing a $1 billion investment in future generations, delivering 679 new classrooms and other world-class facilities,” Ms Mitchell said.

Liam O'Toole - 20 minutes ago
Emphasis on international students. ANU is discovering the results of putting all your eggs in one basket. View
Matthew Soall - 9 hours ago
Maybe ANU should be more focused on teaching students then running the place like a business. View
Capital Retro - 10 hours ago
The alarm bells are ringing now: https://www.abc.net.au/news/2021-04-23/anu-unveils-162-million-budget-deficit-due-to-covid-1... View
Opinion 66