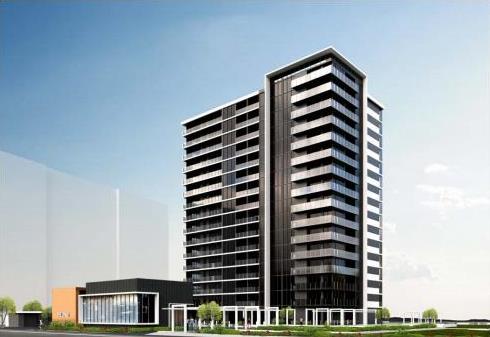 An artist’s impression of The Oaks residential tower, Stage 1 of the redevelopment of the Yamba Sports Club site in Woden. Photo: From the DA.

A proposed 16-storey residential tower on the Yamba Sports Club site in Woden will be one of three to eventually occupy the historic property which was originally home to the Eddison family homestead.

Named ‘The Oaks’ after two registered trees on the site planted by the Eddisons that will be incorporated into the project, Stage 1 of the Amalgamated Property Group development will comprise 156 apartments, two levels of basement car parking and communal gymnasium.

The proposal will add to the rising skyline of Woden, joining a range of other high-rise residential developments in the Town Centre area. Directly adjacent to the site to the south-west is the Trilogy Apartment complex comprising of 323 apartments across three towers.

The development application proposes the nearly 1.4-hectare site on Melrose Drive and Irving Street, Phillip, be subdivided into four separate blocks, with three for residential development and a fourth containing the gymnasium, landscaped open space and the heritage-listed oak trees. The four blocks are intended to be community titled.

Stage 2 will be another apartment building with basement parking, to be proposed in a future DA while Stage 3 is yet to be determined. The whole development will be delivered over an 18 to 24 month-period, subject to site and market conditions. 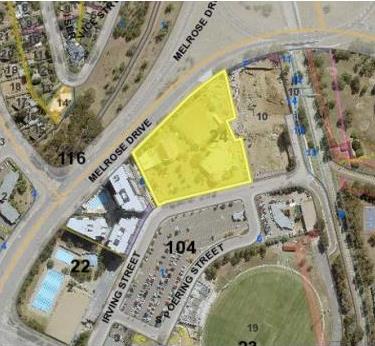 The DA proposes that the existing Lease be surrendered in favour of two new separate Crown Leases, in preparation for a Community Title Scheme.

The DA says the residential tower will be set back from Irving Street with the entrance from the south providing views through the lobby towards the northern pool terrace.

Beside the lobby will be ground level apartments with private courtyards, and on levels 2 to 16, a mix of 10 1-3 bedroom units per floor are planned. Most will face north.

The gym will be a 233 square metre human scale building fronting Irving Street, with other service buildings set back from the street. Two separate tenancies are proposed at the ground and mezzanine floor levels of the gym.

A total of 244 basement car parking spaces are proposed, with 113 on the first level and 131 on the second. Level 1 will also include bicycle storage, and access to the car park will be via a two-way ramp accessed from the Irving Street entry.

The DA says the design intends to cater for its resident’s modern lifestyle requirements and encourage recreational, social and communal activities.

“The civic space interface will importantly acknowledge the site’s prominent location and street frontage and will aim to activate the public realm and create improved streetscape environments. A central village green designed around the retention of two registered oak trees will provide a community hub for residents and the broader community,” the DA states.

Too much of the Woden development seems to be on land that used to be for community entertainment.

Buildings on the mini golf course, on the bowling alley, on the gymnasium, on the basketball courts etc etc.

Woden and Tuggeranong have lost so many public places and community facilities over the last decade and a half.

With high density housing replacing a school playground, a basketball or tennis court, a sports field etc, it’s no wonder these two regions are suffering from a lack of entertainment options for their residents.

I was just thinking the same thing.

Isn’t it good that the club got all that land on the cheap to provide the community recreational facilities like the bowling greens and pitch and putt golf course and now they’ve turned land developer to make a shedload of money.

This site may be more suitable than some others for residential housing due to it’s location, but the removal of open spaces and recreational facilities needs to be balanced across the city so we don’t become a concrete jungle.

We don’t agree that often Chewy, but you have hit he nail on the head this time.

We can probably name at least 20 Community facilities that have disappeared across Woden and Tuggers over the last decade or so, but I can’t really think of anything much new that has gone in to replace them.

ACT Government seems pretty happy to pocket the money for the land sales and re-zoning taxes, and even more happy to use that money for their Election winning strategy of funding facilities in the more northern Canberra Electorates.

While the WVCC welcomes densification in Woden, we want it to be done well. There will be 7 residential towers (where the basketball stadium, bowling greens and tennis courts were) in the north of Woden, 4 at WOVA, 2 at A&A, 2 at Grand Central, 3 behind the police station and the existing SkyPlaza. That is 19 towers and it is just the beginning. Every square inch of the Woden Town Centre area is zoned for residential towers from 12 to 24 storeys. Blocks are being subdivided which then allows and additional four storeys. Zoning provides for 20 storeys at Westfield and 28 storeys on the perimeter of the Town Square. There is no provision for human scale, open green spaces or community facilities.
While the CRA has targets to ‘green’ the city and provide 3 bedroom apartments to encourage families, who is caring about the future of Woden?
Woden residents need to have a voice. The best way is to receive our emails and attend our public emails.

It is just the beginning. Personally I hope we get to 38 or 57 towers in Woden. I also hope one day we have a representative community council for Woden that speaks for the entire community, not just a small group of self-interested fanatics who claim to welcome densification, but when you speak to them in person, oppose anything and everything that affects their personal interests.

Marc Blackmore - 30 minutes ago
Another scheme to disincentive investors into the market reducing supply and end result is more pressure on rent rates. The o... View
Jeffrey Brown - 34 minutes ago
It's a great idea. It should definately apply to a situation where the Landlord does not honor the Lease Agreement through th... View
Natasha Van Oudheusden - 35 minutes ago
Often the landlords are just normal people trying to provide for their families. How are they supposed to afford it? View
Community 8

Helping ACT - 32 minutes ago
Roseanne Howes I am proud of Slabsforheroes too. A history written by them couple of years ago. I am part of them.... View
Helping ACT - 37 minutes ago
Hi Jenny thank you. Let us keep helping. Humanity needs it. View
Jenny Mason - 2 hours ago
Congratulations and many thanks for all your hard work, for many, many year, Mohammed Ali!... View
News 23

Aaron Nicoli - 35 minutes ago
It’s also so much safer now… 60km/h jam brakes on for the camera, accelerate back out to 60… It’s achieved nothing fo... View
Phil Hogan - 1 hour ago
Got to pay for the tram 🙄 View
mark boast - 6 hours ago
Is a speed limit a “never exceed” or a permissible maximum plus/minus 10%? Cameras don’t image opinion. Time to move on... View
News 3