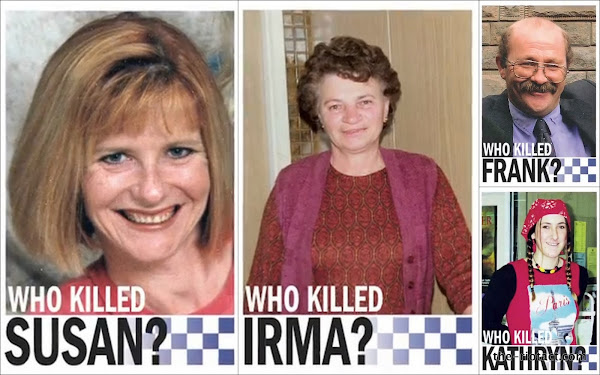 Minister for Police and Emergency Services, Simon Corbell, has today announced the ACT Government would provide $2 million in rewards to help ACT Policing secure a conviction in four of Canberra’s unsolved murder cases.

The four unsolved murder cases will now each attract up to a $500,000 reward that would be paid for information that leads to the apprehension and subsequent conviction of the person or people responsible for the respective murders.

The following unsolved homicides are now the subject of new reward offers:

2. Ms Susan Elizabeth Winburn: found dead inside her Gordon premises at 81 Knoke Avenue, Gordon, about 12.40pm, on Tuesday January 13, 2004. Ms Winburn was last seen alive at the Erindale Shopping Centre, Wanniassa. She died as a result of neck compression (strangulation);

3. Mrs Irma Palasics: found dead in her McKellar premises on Saturday November 6, 1999 following a home invasion. She died as the result of a serious assault; and,

4. Ms Kathryn Anne Grosvenor: found dead, weighted down by a concrete bollard in Lake Burley Griffin on March 9, 2002. There was an unconfirmed sighting of Ms Grosvenor at the George Harcourt Inn, Nicholls, ACT on 3 March 2002. She died of numerous stab wounds.

ACT Policing has released four videos to go with this:

How does it relate to this thread ? These are cold cases.

Read the whole of johnboy’s item then read the posts, again.

How does it relate to this thread ? These are cold cases.

I hope this gets somewhere. They are all deserving of justice.

According to tonights WIN News, a number of people have come forward to potentially identify the 4 Pitch and Putt perps, related to the Palasics murder.

deeply saddening. i can’t imagine being the family or friends of one of the victims and not having any semblance of closure on my loss.

Knowing is one thing.

Proving in a court of law is another thing.

Proving in an ACT court appears to be yet another thing.

But I thought the Police already knew who killed Susan???

This will keep that pesky Eastman inquiry off the front page….

The information from relatives or associates of the guilty ones that lead to conviction will be well worth the money on offer. There will not be any higher offer coming.

I cannot begin to imagine how soul destroying it would be for the next of kin of the above victims.It sickens me that the low-life slime are still walking the streets while the families of the victims suffer.If doubling or tripling resources would result in an arrest and conviction then that’s money well spent.

This is probably the most positive contribution to ACT society you will ever make.

My heart goes out to the four families of the victims. It’s the sh-ttiest club to belong to at the best of times but to not know who did it, or know, but not be able to get any traction on the case to charge anyone with murder is the sh-ttiest.

Dolores Bicket - 2 hours ago
Where can we drop off the blue milk lids? View
ACT Election 108

Jose Black - 14 hours ago
The ACT Greens have a major policy on supporting the community sector (including youth and mental health services) and giving... View
Ghanaian Aussies - 20 hours ago
Tom Munro Bullying someone who identifies differently to them is what I am talking about. This is not a fair go for all. So i... View
catder - 23 hours ago
Bethany Williams your post exposes you as a hypocrite that knows nothing. We know there are members of the Libs who are conse... View
Property 35

@The_RiotACT @The_RiotACT
The ALP's been in charge for almost 20 years but health has remained a constant sore point for successive Labor governments. Why? https://t.co/aGuaozRh3c (14 minutes ago)