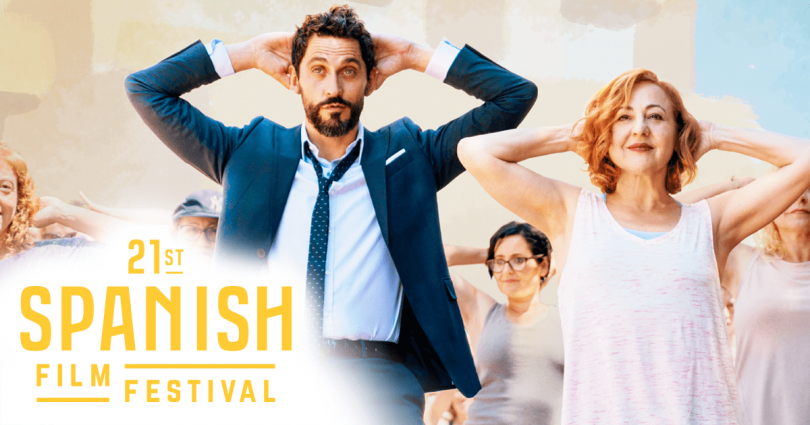 The Spanish Film Festival is all grown up. Turning 21 this year, the festival returns to Palace Electric Cinemas from Wednesday 18 April – Sunday 6 May.

With 25 features on offer, there is something for everyone from the grown-ups down to the little ones. There’s even an encore screening from last year’s festival – a feature so successful it simply had to come back for more.

Speaking of more, and keeping in theme, consider popping across Northbourne Avenue between screenings to check out the newly-opened tapas bar addition to Braddon’s BlackFire restaurant on the corner of Mort and Elouera St.

The fiesta gets into full-swing with Opening Night screening of quirky dance dramedy The Tribe starring Paco León (Kiki, Love to Love) and inspired by the real-life dance troupe Las Mamis who surged to fame during the 2016 season of ‘Spain’s Got Talent’. The festival opens with a bang on Wednesday, April 18, with catering from Monster Kitchen & Bar including Freixenet cava on arrival and a screening after-party. Arrivals 6:30 pm; screening 7 pm. $52 for Palace members; $57 otherwise.

Sunday, 22 April will see a Special Event screening (w/reception) of the iconic and indulgent Jamon, Jamon (1992), starring a very fresh Penelope Cruz in her film debut alongside now husband Javier Bardem. The 2018 festival presents the unique opportunity to catch director Bigas Luna’s celebrated Iberian Trilogy – which also includes Golden Balls (1993), and The Tit and the Moon (1994) – on the big screen. The retrospective will also include documentary Bigas x Bigas, co-produced by his vital collaborator Javier Bardem, and involving a who’s who of Spanish on-screen royalty.

Thursday, 26 April, catch a mid-week reprieve with the Special Event screening of cathartic comedy No Filters. Madrilenian movie-star Maribel Verdú (Pan’s Labyrinth, Y Tu Mamá También, Belle Epoque) – ubiquitous across the Spanish-speaking film-world and starring in three festival films this year – here stars as Paz, a woman who finds herself unable to keep her opinions to herself following some spiritual healing gone wrong (or right?). Therefore, Paz receives the blessing (or curse?) which emboldens her to regularly speak her mind with uproarious consequences. 6:30 pm Freixenet cava on arrival; screening at 7:15 pm. $24 for members; $28 general admission.

A special component of this year’s festival is Reel Directoras, highlighting four of the best recent debut directorial efforts from female Spanish filmmakers. Júlia Is showcases the journey of self-discovery of a young Catalan architecture student as she undertakes an exchange to Berlin. Winner of Best Film and Best Director at Malaga Film Festival 2017.

Ana Murugarren’s The Bastards’ Fig Tree is a Basque country-set black comedy about redemption and the Spanish Civil War as an executioner-turned-hermit attempts to atone for his sins via vigil over the tree his victim had previously planted. Marina Seresesky’s The Open Door rounds out the section, painting the portrait of a jaded Madrid sex-worker in her apartment block community. Through a twist of fate, a young girl soon winds up under her wing, affording her a new lease on life she perhaps didn’t expect to find.

With two films selected specifically for the kids, Reel Infantil is a great opportunity for the little Latin-language linguists to soak up some Spanish. This year’s Academy Award and BAFTA Award-winner for Best Animated Feature, Coco (in Spanish), will enjoy a special screening on Wednesday, 25 April. Young Miguel and his canine companion, Dante, embark on a musical meandering through the enchanting Land of the Dead in this truly immersive and colourful ode to Mexico, which also picked up the Academy Award for Best Original Song. Also screening is Tad the Lost Explorer and the Secret of King Midas, which pipped Coco at the box-office back home in Spain and also scooped the Goya for Best Animation Film. Follow Tad – along with his dog Jeff, a mute parrot, and an unruly mummy – as he zips across Spain and the deserts of Turkey in his quest to save his friend and retrieve her precious ring. Both films will screen in Spanish without subtitles.

The main strand of the festival, Reel Español, offers another 11 films with everything ranging from comedies (Abracadabra; It’s For Your Own Good), action (Re-Evolution), drama (Dying; Loving Pablo – starring Penelope Cruz and Javier Bardem as Pablo Escobar), mystery (Mist and the Maiden), and gripping historical fare (Gold; The Chess Player).

The Canberra leg of the Spanish Film Festival will close Sunday, 6 May, with a commemorative revisit to the wonderfully macabre world of Ofelia and the faun in Pan’s Labyrinth (2006). Following visionary Mexican director Guillermo del Toro’s outstanding success at the recent Academy Awards for The Shape of Water, here we revisit his beguiling fable of mystical wonder and brutal reality set in 1944, amid the aftermath of the Spanish Civil War. Winner of three Academy Awards and seven Goyas in 2007. Enjoy a Torres wine on arrival at 6:45 pm, followed by the screening at 7 pm.

Enjoy discounted tickets on Mondays with Lunes de Locos and stay tuned for the announcement of encore screenings by popular demand towards the end of the festival.

Pick up the Official Programme at Palace Electric Cinemas or head HERE for more information.

Camille Martin - 4 minutes ago
Milenko-Slavenka Jovanovic then what is it to you either? View
Greg Hollands - 22 minutes ago
How's the tennis going? View
Phil Hopkins - 24 minutes ago
Good article Tim View
Opinion 142

Errol Jobsz - 29 minutes ago
$10 million won't go far on that road. View
Brett Griffiths - 1 hour ago
Excellent! It’s the best bypass road, onto Jerangle then Bredbo, for when the Monaro highway is shut down, as it was recent... View
Topher Garlik - 2 hours ago
10mil that will fix the pot holes, if they serious can double that 💰 View
Lifestyle 20

Grog Yogurt - 2 hours ago
Paul South so did I, worked there for 5 years. Late 1990 from memory on a Tuesday evening (tight arse Tuesday at the movies)... View
Community 105

@the_riotact @The_RiotACT
#DixonAdvisory - for decades the first choice for financial advice in #Canberra - has entered voluntary administration due to mounting liabilities, potential class actions and penalties owing to the corporate watchdog https://t.co/3IHElcJyLS (58 minutes ago)