Bad Slam! No Biscuit! A review 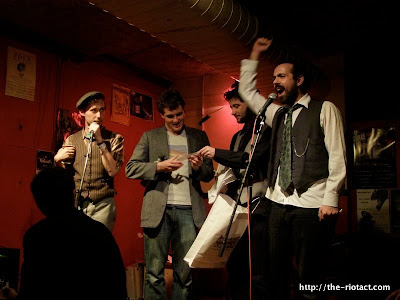 On the third Tuesday of every month the Phoenix pub in Civic throbs and pulses to one of the more interesting events in the Canberra social calendar.

Back in the heyday of the Bootleg Sessions the Phoenix would pack out on a Monday night not so much for the music, but for the madcap MC’ing of Adam Hadley

Now joined by Andrew Galan, The Master Of Conflict (he doesn’t like poetry, but he does like competition), and a team of beautiful assistances Hadley has dispensed with that music rubbish to run a poetry slam.

The format is simple.

Turn up at 7pm, put your name on the sheet to perform, or volunteer to judge, if you want discounted drinks. Settle in, have a chat with fellow revellers.

At some point Hadley will show up and carnage will commence. As the night progresses Hadley will get drunker and the frequency with which he will ask the audience if they’re having fun will increase. Theoretically at some point he’ll just go into a loop, but it could be he passes out before that.

Those who’ve put their name on the list get two minutes without props or music to perform whatever’s on their mind, it has to be original, but beyond that imagination is encouraged. Audience participation is frequentand preliminary voting is based on how loudly the audience roars approval.

The designated judges are then asked for their scores (from -? to ten) the audience are encouraged to let the judges know what they think of the score. The highest and lowest scores are removed so that ex-girlfriends can’t disadvantage poets unduly.

It’s as much theatre sports as poetry, and immensely entertaining. Even better it’s free.

One Response to Bad Slam! No Biscuit! A review
Filter
Showing only Website comments

Hadley was brilliant as the MC for the Bootlegs.

Stephen Harris - 21 minutes ago
Julian Hayes thenif it increases their costs but not their profits then they will stop doing what they are doing and do it di... View
Nicky Goose - 14 hours ago
Flexible work hours are a fabulous idea and frankly in a modern society and economy why we don’t push them more is beyond m... View
Michael Roy - 14 hours ago
Robert Knight that is one of the reasons it is abysmal, we need dedicated BRT lanes View
Food & Wine 3

Alex Petrow - 3 hours ago
Easy Purgy!! Double the speed limit. Because you will be on the road for half the time, the window for prangs is also halved!... View
Roderick Saunders - 3 hours ago
Kirsty Noad Canberra's had the log book assessment system for years. I think you only needed 20 hrs with an accredited drivin... View
Jason Thornthwaite - 4 hours ago
Good driving= no parking fines, no speeding fines, no accidents...pretty simple, but a positive amongst all these negative co... View
Community 2

Jade Barges - 3 hours ago
Such a pretty Church 💗 View
Janet Ilchef - 16 hours ago
I remember seeing Canon Buckle swinging beams into place. And the bells at St John’s in Reid were given by Lord de L’Isle... View
Motoring 32

Martyn Tweedie - 13 hours ago
So you're an exception. Nice to be able to afford all that. Sounds like the problem is affordable housing and rent, not the w... View
Patrick J Pentony - 14 hours ago
They will have a great view of those new massive powerlines View
Marko Lehikoinen - 14 hours ago
Martyn Tweedie we have 3 cars now, needing a 4th and in few years will need a 5th one. When kids can't afford to move out and... View
News 13