Interested in property?
We can help you with that
24 November 2008 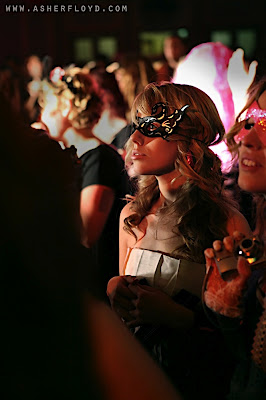 Partly it was the time of year, still light when doors opened.

Partly it was simply that the new organiser is a woman. It came out in little things like the bar stocking as many varieties of champagne as beer. (And I am now forcefully reminded that amongst the many reasons I do not drink VB is its predeliction for headaches.)

CityNews’ Jorian Gardner was a fine MC, but lacked the madcap excitement of last year’s Jester. And the entertainment, be it burlesque dancing or fashion parades, seemed to engage the ladies more than the men.

On the other hand the men had the ladies to look at.

Despite the differences it was amazing fun. The large crowd had a great time at the Albert Hall without incident.

There’s a slideshow below of the astonishing outfits. If you’ve got some photos of any we missed email them in to images@the-riotact.com along with the name you’d like credited. Many thanks to Asher Floyd who has sent in the sort of corking images one would expect from a photographer of his stature.

A note on the photos: A downside of a masque is that photographers who normally wear glasses are seeing a little fuzzy. This meant I tended to play it safe and use flash. Yes, some people are in there more than once. As this is a function of particularly amazing outfits this is not a bad thing.

Couple of years too late perhaps….. but glad most of you had a good night….. am working on a new one for 2011

im the one in black and pink 😉

im the one in black and pink 😉

I sometimes do! Sometimes!

C’mon Granny, since when does anyone agree with me anyways 😉

Hmmmm … that is a bit scary.

I have been stuck in a broken elevator with Blind before, and within the first minute and a half he had started to perform mouth to mouth on my left eye, while intermittently rambling about the history of Mowtown. The elevator started up after the third minute, but he demanded emergency services leave us alone on our ‘honeymoon’.

I would hate to be stuck in a broken-down elevator, but if I was then I would be happy to have someone like blind to speak to!

I would hate to be stuck in a broken-down elevator with no-one but blind to speak to.

maybe instead of ‘hearing’ about it, you should check it out yourself.
and yes, i had a grand time thankyou.

and blind, brilliant. the dance floor was just like that!
“shaking their hips because they could not not”
🙂

*YAWN* what was Blind going on about?!

Some nice shots JB. Nice mix of cool costumes, plenty of mutton/lamb shots, good to see “non-stick” models for a change and so rather kooky antics. Not my taste of a night – but looks like fun for those who were in to it.

Shocking that people should be unentertained for a SECOND. If things don’t improve, they may have to, you know, speak to each other.

too much time in between “things to do”, poorly organised

I’m pretty good with my umbrella, aren’t I??

I personally like my decolletage, and am thus not averse to having a bit of a mooooooo from time to time.

I think I overdid it a bit last trivia night however, and have decided to actually wear clothes to this next one.

I could tell from the moment I saw the horror in the eyes of my significant other, but it was too late to change.

Besides I had spent a good $10 on the thing and I was blowed if I was going to waste it. Besides yellow is a happy, cheery colour I have become particularly partial to of late. And I had a very nice flower that matched.

I spent a lot of the evening with my arms folded in front of my chest, thinking, ‘What a pain! I’ll never wear this again,’ but I may have performed a community service for some that usually rely on magazines for that sort of thing.

In any case, this week I’m thinking footy jersey ….

Going by the photos, there appears to have been a somewhat buxom theme running with a very large number of the females who attended.

(exit pursued by Granny wielding Umbrella for the disrespect of young women).

too much time in between “things to do”, poorly organised

wow. so many people really dressed up. Looks like a cool party and i missed it..*sigh*.

I’m getting my costume ready for next year. I’m thinking of a goth Jack Sparrow look.

Now last night the Pink and Black Jester Ball. There is no such thing as a review and if there were this would not be a review – there is no such thing. Just what happened was that I went to the Albert Hall with a head full of the Smashing Pumpkins’ Cherub Rock and walked inside a hall full of balloons, flower petals, girls and guys in elegant formal clothing and masks, and on the stage Lloyd Allison-Young with a piano growling about the cookie child who infests his nightmares

I stepped through into a large and still nearly empty hall and wandered through the slowly shifting statues of Min Mae’s tableau, and Lloyd sang Bow and Balance without accompaniment which was sombre and cold and sister drowning sister, then put his hands back on the keyboards in noisy fierce chords which amply exceeded the capability of the puny soundsystem and tore through the speakers amid clouds of fuzz, like

waves in a storm and Lloyd’s voice like some kind of chilling wind tearing spray off the back of the keys, and then as he was finishing the statues were moving, assembling, coagulating like drops of water on a windscreen gradually slipping into one mass –

– found Jorian Gardner wearing a General’s outfit with a pink fringe on the lapels, which he informed me he had been rewarded with in ‘The Great Gay Oxford Street Gang Wars’, where he had earned the title ‘The Gay General’ – it’s rare that Jorian and I see eye to eye on matters, but this was definitely one –

– and there was a Burlesque show, which was charming and sweet and lovely because the ladies were so enjoying being sexy and so willing to share their joy in their bodies with all of us – nevertheless the sexiest thing by far were all the young women in the audience dressed in their elegant finery sweating and cheering and happy – shaking their hips because they could not not – happy and beautiful just because that was the thing that they do, only the thing that they do is hot – and the DJ played MINGUS – fucking Charles Mingus’ ‘Better Git It In Your Soul’ tearing loose out of the speakers, and then just as two tribes of Min Mae’s Tableaux animals came crawling through the balloons toward me the tune slipped into Four Tet’s ‘Smile around the face’ –

– brief aside for all of you that have never heard Four Tet’s ‘Smile around the face’ – it is the most euphoric, gorgeous tune that you have ever heard, even though you’ve never heard it –

– and the music swelling and pouncing and the Tableaux animals laughing and swarming and colliding in a small nova of limbs and faces – all of which pummelled right down into my bones and said ‘Finig – Finig – happy now?’ and I was.

the fashion show was all kinds of sexy again, the sexy that comes with models who are proud of how they look and a crowd that is excited by the models and the clothes that they are seeing – and then Little Dove’s Butoh performance, which was a smack in the teeth of performance chops – without any real context for what I was seeing, I was hard pressed to frame an emotional reaction to it, but I am just enough of a theatre and performance dude to recognise skill and craftsmanship when I see it, and the shivering gasping Butoh princesses shuffling unsteadily forward down the catwalk were levels of skill beyond anything I have attained in performance-craft –

then the Andi and George Band – to my shame, I have never seen these creatures before, even though they crossed the threshold into Canberra legend some year or so ago, and they were exactly as good as everyone says they are – began with an unhurried build towards a stomping soul groove, and then kept that up more or less without a break over the next two hours until midnight, when they were shut down by The Man – stamina funk! of course all the beautiful ladies are more beautiful and the ugly gentlemen far more palatable (ah, heterosexuality) on a merry and smiling dancefloor, and so it was and there was so much laughter and energy and celebration –

Why ? it’s the type of dress you wear without one. If she’s comfortable enough with wearing it then what’s the problem ? She wasn’t the only one either.

Looks like fun. And I bet a lot of people got lucky afterwards too. Yet (and maybe that was the idea) it also makes me think of the band playing at the ball on the first class deck while the Titanic was sinking…

It was a delightful evening that ended way too soon… Great shots, Johnboy and Asher!

Yeah, notice how he got like 4 shots of her!

wow, looks like it was a fabulous pink and black night