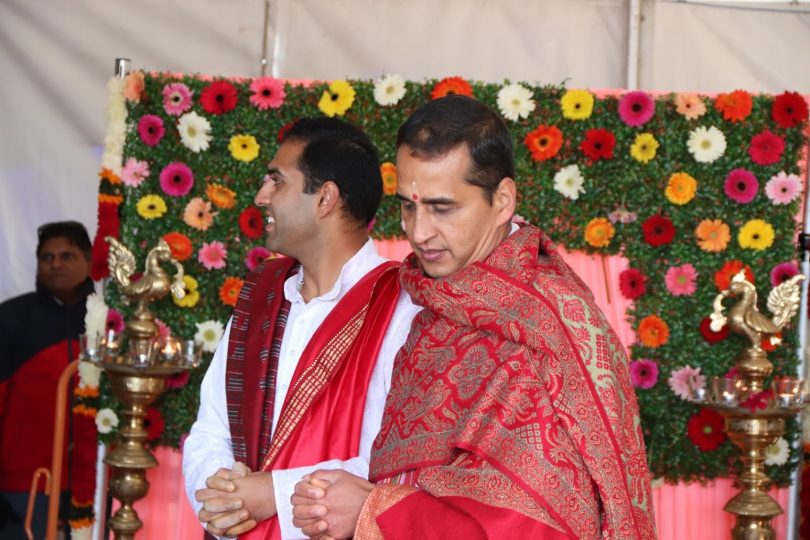 The traditional ceremony connects the land to the temple to the divine. Photo: Praneeth Galla.

The much-anticipated traditional temple to serve the strong Hindu community in Gungahlin has taken another stride forward with Bhoomi Puja, a traditional ground-breaking ceremony held last Saturday (5 June) to mark the beginning of its construction.

Despite the chilly weather, Canberra Hindu Mandir chairman Dr Krishna Nadimpalli OAM said they had a fantastic attendance with more than 1000 people present including the High Commissioner of India Manpreet Vohra and several local politicians including Shane Rattenbury and Elizabeth Lee.

Dr Nadimpalli explained that the ritual was an ancient, auspicious one to seek the blessings of Mother Earth.

“It’s very important that we connect with the temple before it is built because the Hindu belief system says that god is found in nature – whether that’s earth, air or space. All of this is considered in our prayers.

“In the first foundation or ground-breaking, we pray to the land to say that we want to connect the temple to the divine and to the land,” he said.

Fruit, nuts and spices were all offered up to the deities.

READ ALSO Hot in the City: Dine beneath the night sky in the warmth of a Dining Dome

The ceremony runs according to the tradition in which a 2-metre by 2-metre pit is dug before donated and sponsored bricks, metals and copper rods alongside ashes from the Aboriginal smoking ceremony are placed in it.

Everything in the pit is connected to the deity as well as the ground. 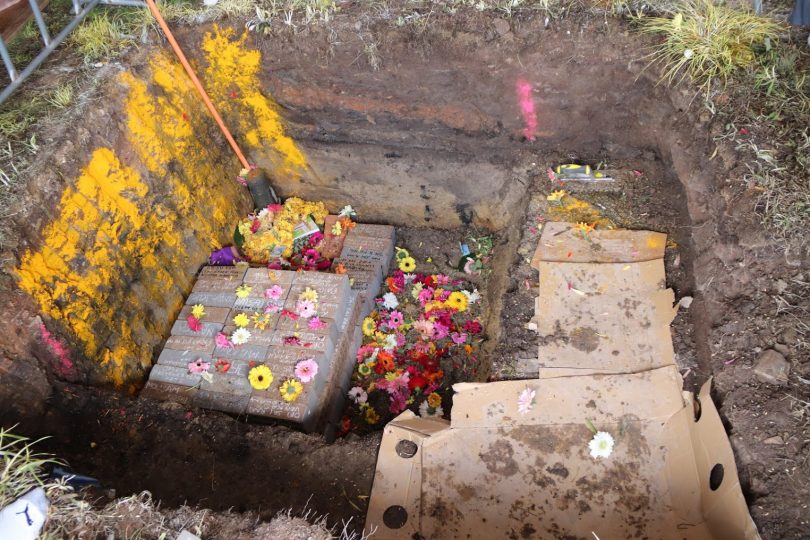 Dr Nadimpalli also explained that participating at a ground-breaking ceremony is a once-in-a-lifetime opportunity for many Hindus.

“When it’s built, it will be there for many generations of people who will come to pray and worship within its walls.

“Each time people pray here, the blessings go back to the people who were part of building the temple in the first place,” he said.

The organisation has been lobbying the ACT Government for more than four years for this temple as they say the current facilities are no longer large enough to serve the growing Hindu community.

“Built in the early 90s, the three current temples were designed to serve the 200 to 300 Hindu families in Canberra.

“Now, in Gungahlin alone there are around 5000 Hindu people and all of the temples are located quite a way away,” Dr Nadimpalli explained.

Formed in 2015, the Mandir received the land from the ACT Government in March 2021.

The complex will be made up of several temples, each one dedicated to a different deity, alongside meditation halls, a library, community spaces such as a festival hall for weddings and events and a vegetarian canteen.

It’s hoped the temple will be used for education, workshops and gathering.

The Mandir also hope that the temple will be used by the broader community and people of all faiths. There are plans to run yoga and dance classes which were open to all.

In keeping with this, a traditional smoking ceremony was held to acknowledge that the temple will be built on Aboriginal land.

“We respect the traditional land-owners, the Ngunnawal people and so we wanted to begin with their way of blessing the land,” Dr Nadimpalli said.

Construction on the 6000 square metre block in Moncrieff is expected to begin in early October 2021.

“There is something infantile in the presumption that somebody else has a responsibility to give your life meaning and point… The truly adult view, by contrast, is that our life is as meaningful, as full and as wonderful as we choose to make it.”
Richard Dawkins