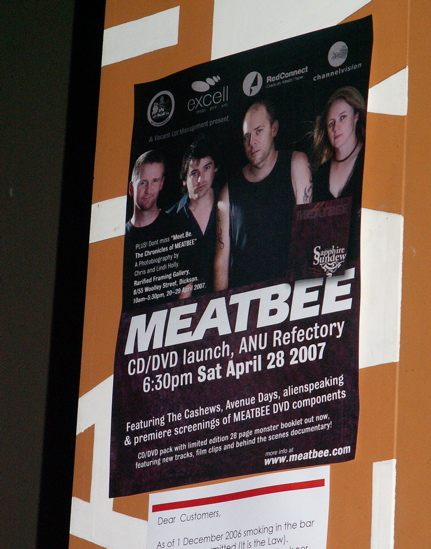 Saturday night I rushed home from the Brumbies, filed the story and hopped on my bike to rush to the ANU bar to see MEATBEE’s CD launch. The new CD is called The Chronicles of Sapphire Sundew which is at least as memorable as it is long.

On arrival I was shocked to find the door locked, only to discover the entrance had been moved to the back of the bar so it emptied out into the covered beer garden. Probably a really good move for the colder months and of some help to the smokers too. Things were kicking along by the time I got in with the main act just starting. 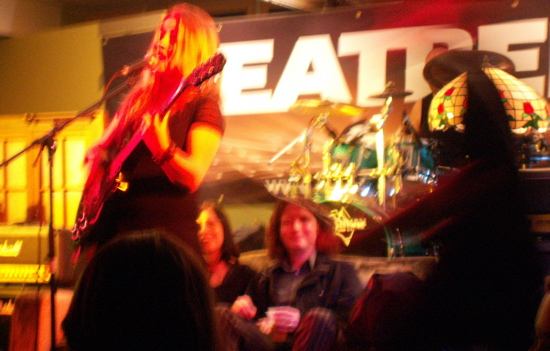 Up on the baroquely decorated stage they had a couch which they invited friends up onto during the performance, you can see them looking slightly bemused.

I’d seen the Cashews on the bill for the show. Did I miss the law saying the Cashews had to have a spot on every live music event in Canberra? By the time I’d got there they had sadly departed, The Santa Clauses of Canberra Music can’t stay in one place too long if they’re going to make it to every show in every location.

Ben excelled himself in the “whacky shirt” stakes with this little glowing number where the dots moved around in the grid.

Their were cameras literally everywhere. I counted six, not including my own. Mostly it was the ChannelVision guys, the things I could do with just one tenth of their resources. While the people recording the event didn’t actually outnumber the audience it felt like it at times. I have to wonder if the crowd keeping their distance from the stage wasn’t in part for fear of tangling up the hordes of camera folk. 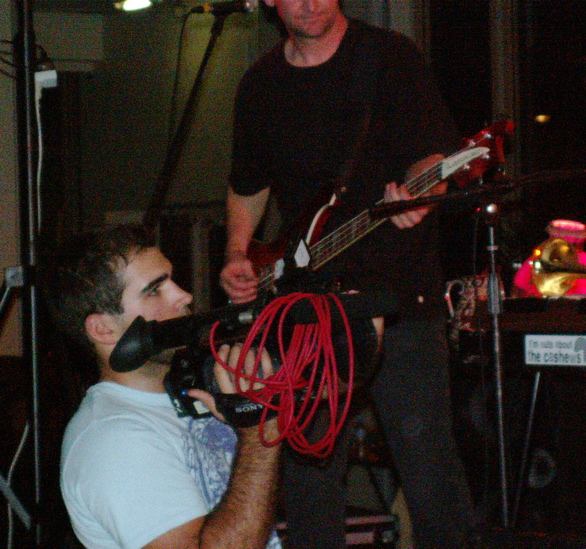 [Hey look, a Cashews sticker on the keyboard, lousy Cashews never gave ME a sticker =( ]

The merch stand was certainly hard to miss. 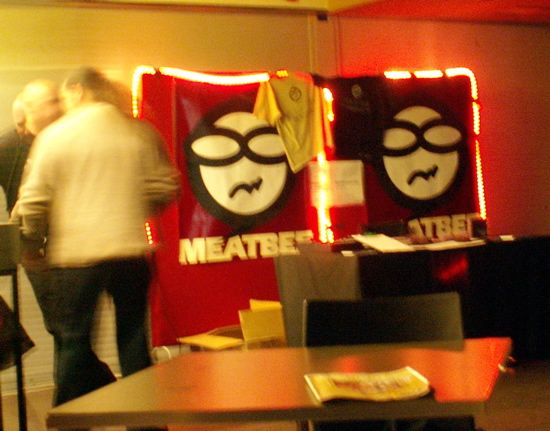 I don’t know what it was but something felt slightly odd through the show. 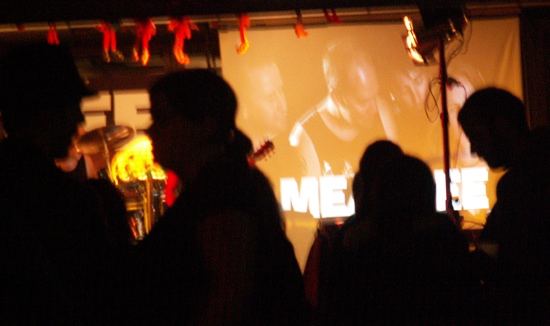 A certain feeling of disconnect. It was one of those rare occasions when the only people I knew there were up on stage. In a way this was good as it meant I actually listened to the music. MEATBEE are getting a little quieter in their old age. The metal edges on the act have been worn away and, on Saturday night at least, they sounded like a blues-rock outfit. Positively radio friendly even.

The security guard was certainly getting into it. 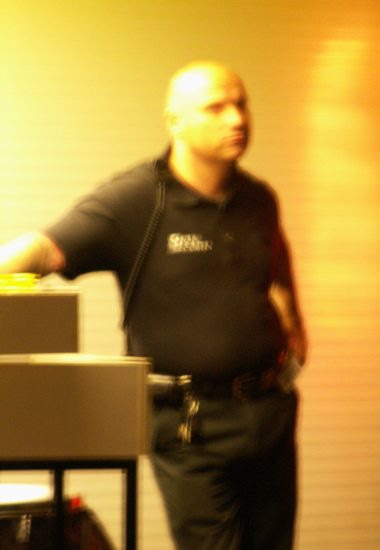 And then my camera revealed the truth behind my strange feeling of disconnection. 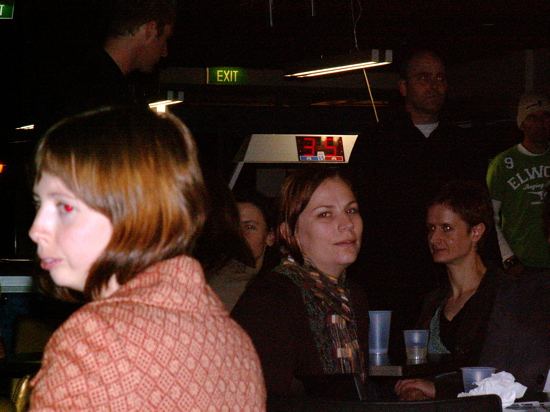 ZOMBIES!!!! The ANU bar was infested with Zombies! That’s what happenned to the Cashews! They were eaten!

In all seriousness though it was polished night (so polished they made the crowd wait for the encore to hear Transformers) and they sounded great. A healthy crowd (in numbers, they might also have been healthy for zombies) really enjoyed the show. I think a lot of people are really going to enjoy the CD which transcends genre.

Thanks to the band for a free copy of the CD and DVD package which *just* squeaks together with the hefty booklet into one jewel case.

hey nice pics johnboy. i too took the beerscooter from the brumbies. the disconnect you mention i think was caused by the lighting. the pa guy for some inexplicable reason would not allow the lights to be turned down. thus we had great views of the anu bar ceiling tiles all night – and i thought zombies liked the dark!? saved by the props on stage though. I liked the gig and i like the meatbee sound now, smooth and edgy all at once. of course the pa couldnt touch the sound at stage 88 during the canberra day festivities. there Meatbee really showed what their music is all about. That was big. Go the bee!

Thanks John Boy! Were glad you enjoyed it. Wed also love to hear what you thought of the whole CD/DVD thing if youre so inclined.
Ben

And can Bruce Willis sing?

Further to my comment on the other meatbee post. I also thought it was a good night. Loved the 2 encore songs – transformers and a britney spears? cover. Thought the stage set was really well thought out. never seen anything like that (at a gig like that)
PM

Didn’t make the launch unfortunately, but saw the photo exhibition at Dickson today, some fine pix, a good chronicle of the band and even if they don’t make world domination, it’ll be something nice to show the grandkids.

Karan Campbell-Davis - 1 hour ago
That's right, build more of those ugly, high density dog boxes, just like Sydney! 🙄 View
William Coats - 10 hours ago
what impact will further development in the Sullivans Creek catchment have on future flooding in Oconner and Lyneham. These a... View
Community 5

Donna Ainge - 9 hours ago
Hi Julie-Anne. Where in O’Connor did you live? Hakea Cres by any chance? View
Dot Willcoxson - 12 hours ago
Suzanne Huntley Doug has posted a comment further down. The neighbour he refers to was Frank Machutta who lived across the ro... View
Doug Willcoxson - 12 hours ago
A neighbour of ours in Pearce was on his way home that night and was behind the cars that were washed away. He was passed the... View
News 13

Zakzook Chico - 9 hours ago
Patrick J Pentony couldn’t agree more View
William Coats - 10 hours ago
So after 20 years this Labor Greens Government is ready to promise action. I guess we will have to wait and see. View
Patrick J Pentony - 10 hours ago
Rheyce Spears we are at the start of the twentieth year of labor greens gov in the ACT. Not sure you can really blame anyone... View
Opinion 3

dashing1 - 14 hours ago
Thip's Thai in Belconnen, for me. Humble setting, delicious food always served with a smile. View
Opinion 40

@The_RiotACT @The_RiotACT
Our latest #GigGuide is out, featuring everything from post-hardcore to punk to jazz, plus several shows on Aspen Island, home of the Carillon https://t.co/UUcPwnkjyq (9 hours ago)

@The_RiotACT @The_RiotACT
Multicultural Eats: Where to find the best Thai food in Canberra https://t.co/Btz4GZRJeu (10 hours ago)

@The_RiotACT @The_RiotACT
The ACT is expanding vaccine storage facilities at the Canberra Hospital in preparation for the arrival of the Pfizer COVID-19 vaccine https://t.co/sJOTHW08De (12 hours ago)