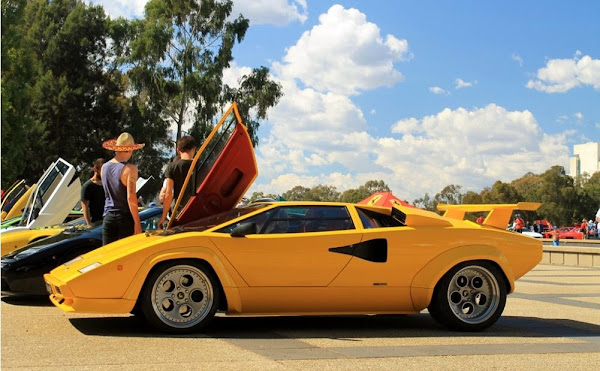 Tony and In The Taratory have sent us a swag of more photos from the weekend’s Auto Italia show and shine in the Parliamentary Triangle. Tony had this to say:

I was visiting your site tonight and saw “Poptop’s” selection of Auto Italia car show photos from last Sunday 7 April, in front of Old Parliament House. “Poptop” was lamenting the fact that he had arrived when the event was packing up, and that Italian cars appear to come only in silver or red. I am delighted to report that they come in all colours and glorious shapes. I was there earlier in the day and the vehicles on display represented a veritable art gallery of Italian coachwork from Ferrari, Lamborghini, Alfa Romeo, Maserati, Lancia, Fiat and others plus a selection of motorcycles and scooters such as Vespa . Probably shouldn’t mention this, but sitting unobtrusively behind the trees (on the Pork Barrel restaurant side) was one of the new McLaren MP4-C’s driven down from Qld. As that particular car is from England, the owner was worried if he put it on display he might have been beaten up by the Ferrari chaps. It was stunning. I’m sure they would have welcomed him with open arms. There were many interesting characters there and I was delighted to see Msgr John Woods, Administrator of the Catholic Archdiocese of Canberra and Goulbourn (and Canberra Raiders chaplain), giving his seal of approval to a Lamborghini Diablo 6.0 litre V12. Not often you get the chance to see and photograph a Catholic priest kneeling down with “the devil” but the Lambo, in “clerical black”, would make an interesting addition to the clergy car pool.

Here are their photos:

He is playing the “Running On Empty” version

Must it be yellow?

Barcham will be soundly thrashed.

Well thank goodness and thank you Tony and In The Taratory!!!

I sent my snaps in, expecting them to possibly be combined with a more complete collection. To discover RiotACT had given me a Gender Reassignment as well as the apparent exclusive was a bit startling.

Barcham will be soundly thrashed.

Jeanne Mclauchlan - 38 minutes ago
Vanessa Schultz Hi Vanessa, it is very sad time for all, regards Jeanne View
Illyria Tyers - 5 hours ago
That's very young ... #RIP.... View
Vanessa Schultz - 12 hours ago
Too young, and always a happy football mad kid, I grew up across the road in Hopetoun Circuit Yarralumla from the McInnes RIP View
News 39

James Dof - 2 hours ago
I was catching a lot of public transport before covid even though I have a car, one reason was it's cheaper, other reason was... View
James Dof - 3 hours ago
Each to their own I guess, I take the bus because it's cheaper than driving. though I have caught the train and it's much mor... View
JC - 4 hours ago
The great dividing range is not an issue and is not one that needs to be tunnelled through. I’m sure you have driven the Hu... View
News 3

Spiral - 5 hours ago
"He was convicted of mishandling classified information that potentially revealed the identities of agents". I agree his puni... View
Acton - 6 hours ago
This is not the first time defence personnel have been caught mishandling classified material, but the harsh circumstances of... View
Spiral - 6 hours ago
"“J” has well-grounded fears that he might be targeted by foreign intelligence agencies" That certainly sounds like he ha... View
News 27

nigefromfarrah - 8 hours ago
Constructing the city to lake project was a labour commitment at the 2016 election. They won, enough debate, get on with it.... View
Property 8

nigefromfarrah - 8 hours ago
Sorry but No part of this will be affordable !! View
Best of Canberra 139

UPDATE - 1 June: Police have now arrested a man and a woman, and recovered a weapon, in relation to a...
Sport 8

Only injury prevented Mark McInnes, a towering back-rower, from playing for the Wallabies. The man known to all and sundry...
Lifestyle 0

@The_RiotACT @The_RiotACT
Prescribed burns will occur over the next few weeks to reduce bushfire risk in the ACT. The ACT's fire management unit shared its insights with Region Media into fuel management & hazard reduction ahead of the next bushfire season https://t.co/3FlHtKHsF5 (12 minutes ago)

@The_RiotACT @The_RiotACT
The Greens & the Shooters, Fishers and Farmers Party have both announced candidates for Eden-Monaro as the race heats up. And with just over a month until the by-election, how will COVID-19 affect what could well be a tight race? Genevieve Jacobs has more https://t.co/HBSmZSAw63 (1 hour ago)