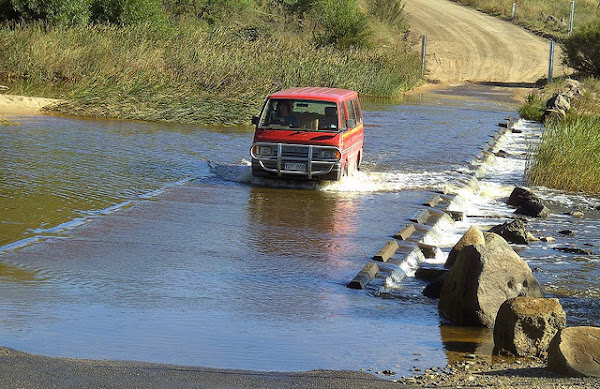 The Murray Darling Basin Authority has bravely published a new draft plan on water use in our part of the world.

“Our plan is flexible and will allow us to monitor and adapt. It’s a plan that will achieve important environmental objectives and is a pathway forward that allows us all to continue to learn and build on our knowledge about how to better manage the Murray Darling Basin for all of its values.”

“I urge people to take the time to read the draft and get involved in the consultations and have their say.”

Cue howling by everyone doing well out of cheap water in the system, but the real question will be what it means for the ACT?

Apparently under this draft we’ll not be subject to massive water use cuts.

“This draft report proposes that the ACT’s right to extract water for our use under the Sustainable Diversion Limits (SDL) remains unchanged at 40.5 GL a year and fairly recognises the ACT’s prudent water management,” Mr Corbell said.

Mr Corbell led negotiations with the Murray Darling Basin Authority and Federal Government to ensure water allocations were not reduced, and ACT residents were not punished for being responsible water managers.

“The ACT community is the most responsible water user in the Murray Darling system, and currently uses approximately 35GL in normal use each year and provides nearly 455GL of water to the Murray Darling Basin annually,” Mr Corbell said.

“The ACT Government has worked tirelessly to get a fair deal for the ACT and I am pleased to see this has been reflected in the draft Basin Plan released for public comment today.

[Photo by ibsut CC BY]

but the real question will be what it means for the ACT?

A big fat nothing.

The ACT continues to be limited to its cap and if it wants to grow it will have to buy in licences from elsewhere in the Basin (exactly as the case has been since 1997).

Reece Williams - 2 minutes ago
Eliza this would be ideal View
George Frilingos - 21 hours ago
Angelina Mamatas are you still interested? Huge investment. We would need a great business plan, and with people not able to... View
Opinion 10

Robert Honeybone Snr - 13 minutes ago
About time they put one on the north side View
Ryan Hunter - 6 hours ago
is this a news page or a lobby group? every 2nd article is about cyclists wanting more and more money spent on them. View
Jim Reid - 6 hours ago
Act Gov't is only interested in Geocon developments than anything to help sport nor cycling facilities.....a bit ironic for t... View
Food & Wine 28

Rohit 'Swarley' Singh - 3 hours ago
The old demand a 50 upfront then charge you cause you're cooked again View
Buck Johno - 16 hours ago
From what I remember of night rider busses it was only over summer. View
News 7

theroundone - 7 hours ago
Who's getting punished, though, asides from law abiding rates payers in this city? A racial or sexist epithet is treated more... View
Capital Retro - 20 hours ago
Violent home invasions targeting keys for owners' luxury cars are now out of control in Canberra. Very few details are subjec... View
Daniel Lesky - 21 hours ago
Jason Malcolm could be worse not like she needs to go to charnwood View
News 11

Meg Redmond - 8 hours ago
It’s a waking nightmare Linda Gee the only flight I was able to see tday was 24,000 economy one way View
Linda Gee - 9 hours ago
Jeez, that's not good. 😥 View
Meg Redmond - 9 hours ago
I’m not sure it is Linda Gee he is struggling to get one at 4000.00 showed available to me yesterday he tried to book it an... View
Food & Wine 1

dolphin - 21 hours ago
love her work all along the light rail. Canberra is a fabulous place for public art.... View
show more show less
*Results are based on activity within last 7 days

Due to unique circumstances, I am one of those Canberrans who had to endure a daily COVID-19 checkpoint at the...
Food & Wine 113

I am standing on the veranda of Kynefin, feeling conflicted. Meeting friends to experience the café’s pint-sized picnic table feast, I have just...
Property 32

@The_RiotACT @The_RiotACT
ADF veterans, first responders and emergency services are invited to lunch at Siren Bar on Australia Day by the APPVA and Effective People https://t.co/8SSUsQUmhu (1 hour ago)

@The_RiotACT @The_RiotACT
Gungahlin will swelter through this weekend's heatwave without the 50-metre pool, and the government has no idea when it will be open again https://t.co/dWobPkVA6t (3 hours ago)

@The_RiotACT @The_RiotACT
A trial has been launched to reduce conflict in Canberra hospitals, and make the healthcare experience less stressful for staff and patients https://t.co/PcXGCHUbcG (4 hours ago)