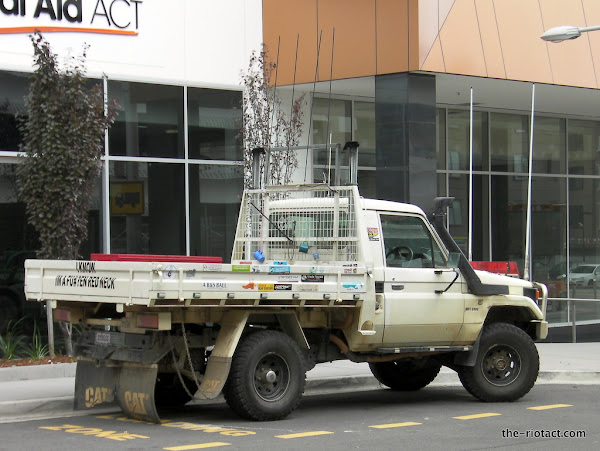 Allsop Street in Civic was today adorned by this creature.

The astonishing thing was the ACT plates on it. 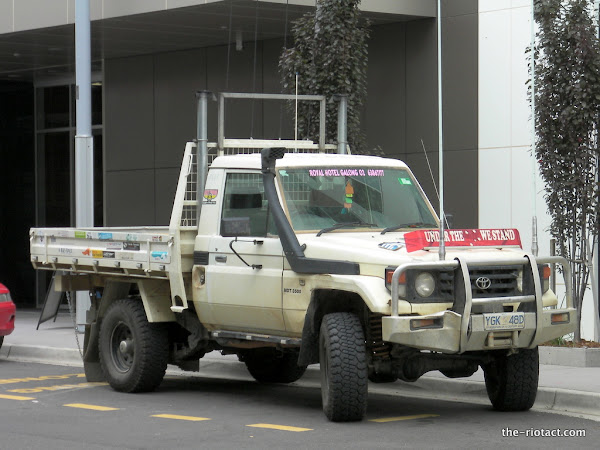 Got an image of Canberra to share with the world? Email it to images@the-riotact.com .

…has commercial rego, it can park in loading zones any time it pleases..

…provided it’s being loaded or unloaded.

nope. Unless the sign says goods vehicles only, then a commerical vehicle can use loading zones for any reason. Be it to load or unload, measure up a job, get some lunch, do some shopping or just have a bludge.

At least this one has seen some dirt at sometime, unlike most of the 4x4s around Canberra.

OhOh, better not post a pic of my chariot then!

…has commercial rego, it can park in loading zones any time it pleases..

…provided it’s being loaded or unloaded.

Consider a stolen white commodore (or perhaps some other coloured stolen commodore) sitting in a loading zone occupied by a disqualified, unregistered, uninsured, bemulletted, flannel-wearing cigarette-pack-in-the-sleeve, tattooed, seriously intoxicated 16 year old with half a dozen prior drunk driving convictions on a 0.00 BAC special licence who is on bail after having broken his bail for having broken his bail for having broken his bail for various DUI offences, not to mention multiple B&E and other property crimes along with the odd spot of GBH, furious driving, etc etc. By parking in a loading zone, he would be hoping to avoid attention after having rammed a few police cars overnight and escaped the subsequent high-speed pursuit.

Most of the above has been written about on the RiotAct over the last few days. By comparison, I reckon this bloke must be all right.

It would be entertaining to see this type of person confront his counterparts in Argentina, Brazil, South Africa, and the numerous other countries located south of the equator in order to chant ‘Under the southern cross we stand’ at each other aggressively.

OhOh, better not post a pic of my chariot then!

[We have used them a couple of times when he picks me up from Civic, because he’s ‘loading’ me into the ute 😉

ROFLMAO Lots of these bogan vehicles in Canberra. Some guys even install lights along the tray and spotlights on the cabin to make a 2 tonner appear to be a Heavy Vehicle, most amusing. Some males have a small penis hangup.

It’s a nice landruiser ruined by that tacky comment on the front, everything else is fine imo

Fixed that for you.

maybe he lives or works on one of the farms within the ACT.

I don’t find it offensive at all. I’m not a massive fan of the “under the southern cross.. etc..” on the front of it, but it’s actually amazingly subdued for a country ute. Have a look at a few of the Brindy Boys utes and then your definition of “Vehicles that offend me” will change.

Is that ego extension parked in a loading zone?

When my husband got his ute registered, we discovered that you need to pay more money compared to a sedan. One of the upsides though, is that utes are classified as ‘light commercial’ with that registration, so yes, utes can use loading zones.
We have used them a couple of times when he picks me up from Civic, because he’s ‘loading’ me into the ute 😉

At least he KNOWS he’s a f$@#en redneck. Self awareness is helpful.

I’m guessing it’s a DIY hybrid or maybe runs on eco diesel and the owner was inside getting a manicure and purchasing herbal tea. You never know?

Kim Rumble-Kozjak - 4 minutes ago
Jacqleequack it was all good fun until the two hour wait in the cab line, in stilettos, without a jacket in -2 🥶❄️ View
Jeffrey Brown - 17 hours ago
Ahhhh those were the days. Standing in the queue and watching the odd brawl of dudes trying to prove their worth. Was normal... View
Property 21

Kimberley Lloyd - 1 hour ago
This is the story everywhere. Have you actually had a look at houses for sale at the moment. Do you have a look at the unimpr... View
SJ Killer - 8 hours ago
Luke Ashe those articles are totally non-related, different areas, different dates, different contexts, click bait, and one i... View
Kriso Hadskini - 9 hours ago
Speculators are buying property that should be for families. And if you are obscenely wealthy why would'nt you? 10% a year in... View
News 4

Ben Keaney - 10 hours ago
Also if they are not in the numbers that the anti-brumbies say, what do you think a maximum brumby population should be? Sure... View
Ben Keaney - 10 hours ago
Di exactly how do brumbies keep the fuel load down? Do they eat fine forest fuels such as sticks and leaves? Or Perhaps its t... View
Di Hunter - 13 hours ago
Jackie Hattingh it’s actually proven that they don’t and it is also proven that they are not in the great a numbers as th... View
News 7

Walter Burley Griffin Society - 20 hours ago
The sound of summer ... View
show more show less
*Results are based on activity within last 7 days

Ebony Bennett and the Colours of Canberra exhibition at Yarralumla

Charity burnout, communities and where the real need is in Canberra

You can join Canberra’s very own amazing race challenge

The Best Gastropubs in Canberra

@The_RiotACT @The_RiotACT
Cavalry mascot Sarge is turning up the heat on his annual 10 km walk to raise $10,000 for Lifeline in Canberra. Find out how you can help https://t.co/CktjV9PbUV (10 hours ago)