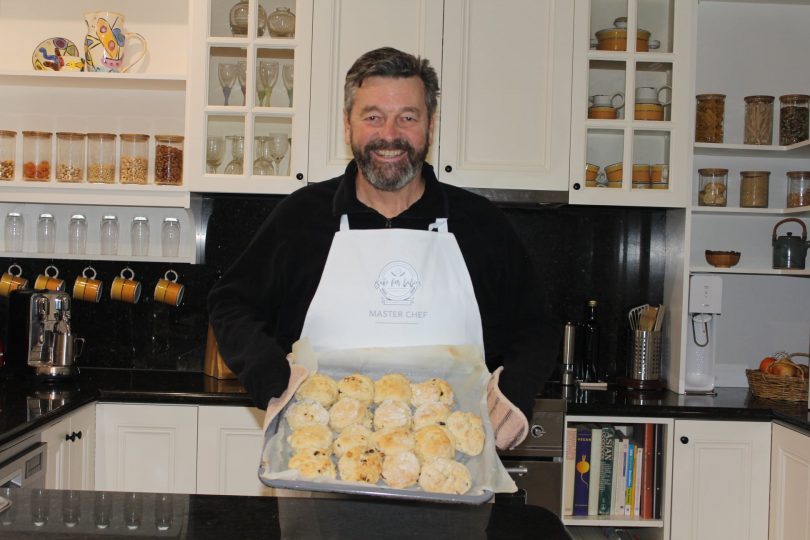 Peter Cursley with a freshly baked tray of scones for this year’s Bake for Babies initiative. Photo: Supplied.

A bake sale is a quintessential way the community can rally behind a good cause by spreading love and raising funds through food. It’s this ubiquitous tradition the Newborn Intensive Care Foundation (NICF) aims to capitalise on with its annual Bake for Babies initiative.

NICF was founded after Peter Cursley suffered a heartbreaking loss. Twenty-eight years ago, he lost his newborn daughter, Hanna, shortly after she was born.

Peter explains that because his wife, Susan, had suffered complications with their firstborn child, which had led to a caesarean, they opted for a home-birth to try to experience a natural birth.

“It wasn’t a good outcome as Hanna was born blue and while they did manage to revive her, during the next few days we were counselled that the electrical impulses in her brain were not as they should be,” he says. “We decided to let nature take its course and Hanna died in our arms.”

Peter says the enduring memory that stuck with both him and Susan was the support they were offered by hospital staff, particularly Dr Guan Koh who was director of the Neonatal Intensive Care Unit at Canberra Hospital at the time.

“The support he offered was astounding,” he says. “He’d even swing by our place in the weeks following just to see how we were going.”

While both Peter and Susan wanted to do something to help, it was after a conversation with Dr Koh, where he explained the needs of the Neonatal Intensive Care Unit at the time, that the idea for NICF was born.

However, the foundation wasn’t immediately established because Susan died only a year later to an undiagnosed brain tumour.

Since 1995, NICF has funded lifesaving equipment for neonatal units in hospitals around Australia, and recently expanded to regional Victoria and Hobart.

It was only after recognising how well NICF was operating in Canberra that Peter began to look to replicating the operation elsewhere.

“For me, the whole thing has been a healing process as it has helped to give a positive reason for the whole thing, and it makes me feel better to know we have been able to save a whole bunch of babies,” he says.

“The vast majority are good news stories and I do get a tear in my eye when I hear of a happy outcome.”

It is estimated NICF has raised more than $6 million in funds which they put directly towards high-tech equipment that governments struggle to fund.

An example of the expensive equipment NICF has been responsible for introducing in Canberra is an eye laser which can help babies in humidicribs who risk the vessels in the back of their eyes bursting.

The eye laser cost around $70,000, and the last time Peter checked the figures, it had saved the sight of 22 babies, although he estimates that figure has grown.

“That’s 22 kids running around the playground who otherwise might not be able to,” he says.

Despite the initial outlay, Peter says it’s important to remember the ongoing public cost of funding guide dogs and schooling for blind children to the tax payer.

Keeping it simple has meant all donations go directly to funding equipment, rather than being spent on administrative costs.

“With Bake for Babies, I’m simply encouraging other people to bake for us, sell the product and then donate the funds to us,” says Peter.

This year, funds raised from Bake for Babies will go to equipment such as cooling blankets for babies with breathing issues, and phototherapy blankets for those born with jaundice.

Peter explains that because premature babies are at particular risk of developing further complications if they are born with jaundice, this kind of treatment is necessary.

Unlike traditional equipment, a phototherapy blanket can be wrapped around the baby while it’s in the mother’s arms being nursed, and it can go out in ambulances so treatment can begin before the baby reaches the hospital.

You can Bake for Babies for the Newborn Intensive Care Foundation between June and August this year.

Helen Brinsmead - 3 hours ago
Are they? Are they really? For a city state of 400 000 they're pretty good. Been to Geelong, Launceston or Elizabeth lately? View
Ryan Molyneux - 3 hours ago
Helen Brinsmead and that's exactly why our local council facilities, health services and education services garbage. View
Michael Roy - 3 hours ago
I strongly argue for paid parking to be used for local public realm. Eg paid parking in Braddon should be used for beautifica... View
News 4

@the_riotact @The_RiotACT
What connects actor Billy Zane to Telstra Tower? How fast can you go on an e-scooter? Clem Cummings designed what iconic piece of #Canberra architecture? If you know these answers, take our weekly Ken Behrens #Quiz! https://t.co/m0lOAYZGLY (53 minutes ago)