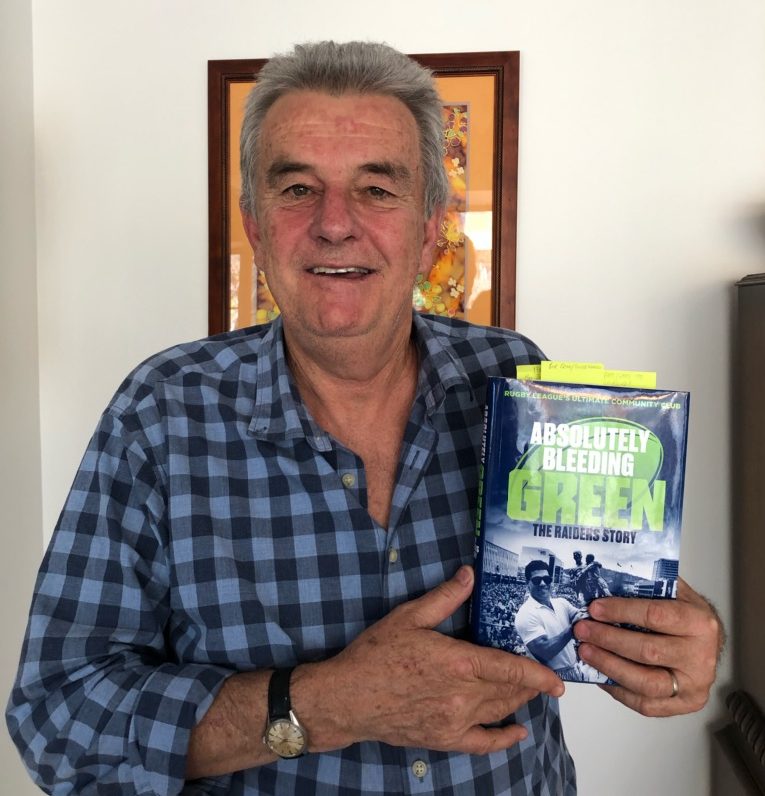 In a Charnwood cafe three years ago, Dr David Headon met with former Raiders chairman, John McIntyre. They were there to discuss the writing of a history of the Raiders Club.

With over 30 years’ involvement with the Raiders as secretary and chairman, John McIntyre was well placed to provide insight. He had been there in the tough times as well as the good, and he was keen to see the history of the club documented.

Historian Dr Headon was the perfect choice to write the story, having written extensively about the club from about 1987 to 1995, the years before Super League.

It was the arrival of Ricky Stuart as coach that inspired David to take on the enormous task of writing a book about a team, a club and a community.

“I liked what Ricky was saying about the importance of the past and the connection the team has with the community and the re-establishment of good values,” says David. “It reinvigorated my desire to write about the team again.”

That’s what led David Headon to a Charnwood cafe to meet with John McIntrye.

But David wanted to write more than a story about a rugby league team.

As a historian, he was well versed in drawing together different perspectives, recognising influences and seeing change evolve over time. The perception of Canberra as a dull city, for example, filled with public servants working for government organisations was well entrenched at one point in time. History shows the Raiders helped to change that perception.

David wanted the book to be placed firmly within the changing community context. This approach meant that the publication was to be as much about the evolution of Canberra as about the Raiders. It adds to a broader understanding of how a sports club can play an integral part within a community and how the community interacts with that sports team.

David says when he started researching and writing the book he was determined to do something different. He wanted it to be a proper, well-researched history. He was keen to ensure it reflected the club’s impact on the community without reverting to what can best be described as salaciousness.

“The stories that I didn’t tell were those that were going to unfairly reflect on the Raiders and what the club has been seeking to achieve.”

That’s not to say controversial elements in the club’s history, such as the decision to go with Super League, were excluded. Instead, such stories are told to inform the story of community impact.

Being a supporter for many years, David was able to put his passion into print.

“It was totally a labour of love; even more so when I started looking at newspaper stories back in time.”

While the book tells the story of the Raiders inclusion into the NSWRL in 1982, David also discovered a connection between the past and the present through the family of prop Glen Lazarus. (You’ll have to read the book to learn what it is!)

As David explains, the present is more interesting when it has history behind it, including the reasons why he became passionate about the Raiders in the first place.

“I came to this region in 1985 and I went out to Seiffert. It was just like going to Brookvale Oval; it reminded me of the past.”

This labour of love took 12 months of hard writing and two years of research. It’s also worth noting the book was written on the back of the 2017 and 2018 seasons when the Raiders failed to make the finals.

It validates his prediction that the work being done behind the scenes in the community would bear fruit. As we all know, it ultimately did in season 2019, on and off the field. The reconnection with the community is strong. The players, in turn, have been lifted by community support.

Great book. I highly recommend it.

Dee Small - 20 minutes ago
Saw a young one on the O’Connor ridge yesterday... View
Ineke Wylde - 54 minutes ago
My favourite bird 😍 View
Opinion 75

Naimad Doowneerg - 39 minutes ago
Bernard Miller not sure what you mean by "shear (sic) volume of adverse events and deaths". According to the TGA There have b... View
Garvin Francis - 1 hour ago
Nada Krstin So here’s totally what wrong with this whole anti vaxx, anti mask, anti lockdown argument. Its not about believ... View
Deborah Gale - 7 hours ago
Nada Krstin The vaccine gives protection and greatly reduce the likelihood of serious disease which is great. But children wh... View
Lifestyle 16

estelle3724 - 2 hours ago
I would like to ask Ms Castley what more she wants the government to do for business. She never mentions that business receiv... View
News 5

phydeaux - 2 hours ago
Rather my point, JS9. “…without qualification”. With significantly different individual circumstances, to give an answe... View
Kathy Blunden - 3 hours ago
I was also totally shocked with my electricity bill. It is the highest bill I have ever received and I have solar panels!!!... View
JS9 - 4 hours ago
It is a weighted average across a range of plans - so it means some will go up more, some go up less. Over the basket of plan... View
News 6

2902 - 3 hours ago
Imagine the money one could make building apartments on this site, right out the front of the proposed light rail track View
ChrisinTurner - 4 hours ago
There is not enough attention to maintaining services in areas with dense populations. The government seems to be working on... View
JS9 - 5 hours ago
I assume there must be some form of contract that requires the pool to be maintained and provided to the community for a mini... View
News 12

lexyliz - 8 hours ago
Does anyone know what happened with this case? A friend mentioned it yesterday as we are planning to send our son to this cen... View
News 7

Capital Retro - 9 hours ago
The next high impact bushfire that will rip through Canberra will be in about 20 years so there should be plenty of time to r... View
News 88

David Conrad - 9 hours ago
What is wrong with teaching cause and effect to kids? Or probability? So don’t fix it, just do what Canberra does best, put... View
show more show less
*Results are based on activity within last 7 days

@the_riotact @The_RiotACT
The ACT Government's restrictions on #retail and #hospitality trade have caused devastating damage to the sector, says the @CanberraLibs' Shadow Minister for Business, Leanne Castley https://t.co/mbDUXSRY5x (24 minutes ago)

@the_riotact @The_RiotACT
Lockdown restrictions continue to ease after the ACT hit the 90 per cent fully vaccinated milestone - here's what the new rules mean for you https://t.co/WRkXOULlTd (1 hour ago)