Conditions are expected to remain dry as temperatures increase.

The ACT Emergency Services Agency (ESA) has brought forward the Territory’s bushfire season, declaring that it will begin one month early – on 1 September 2018 – due to forecast dry conditions.

Minster for Police and Emergency Services Mick Gentleman, who officially announced the move yesterday (21 August), said the Bureau of Meteorology had advised a predicted El Niño event may produce hotter and drier conditions as the ACT heads into summer and had predicted elevated risks of heatwave, wildfire and dust storms.

The ACT decision follows that of the NSW Rural Fire Service which has brought forward the start of the Bush Fire Danger Period for surrounding areas such as the Southern Tablelands to 1 September.

It also follows a week of winter bushfires on the South Coast, particularly around Bega, and in the north of the state near Newcastle and Grafton.

Chief Officer of ACT Rural Fire Service Joe Murphy said the ACT was entering a phase of dangerous fire conditions similar to that of 2003, which would only get worse when the hot weather arrived.

“The fires down in Bega and in the north are instructive about how dry it is now and we are looking at those as examples of the sort of fire season we are expecting in the ACT as it starts to warm up here,” he said.

The ACT had not had any significant rain since January and forest fuels were already dry and grasslands were already working their way to being fully cured.

Rural landholder Graham Heanes who was at the Minister’s announcement, had told him that while bad the conditions were not as severe as he remembered back in 1968. 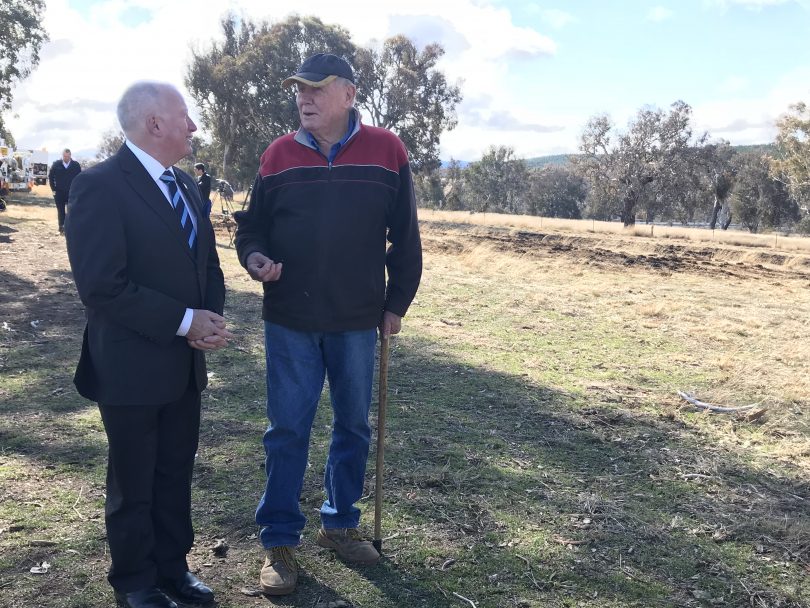 “These times have existed before and they will exist in the future, but we’re better prepared now than we were before,” Mr Murphy said.

A new weapon in the fire-fighting arsenal this year is a specialist intelligence gathering helicopter with a high-tech camera to provide video streaming, photography and infrared images that will give the RFS us a real-time overhead view of a fire’s progress.

“The decision makers will have access to the information they need to make better decisions,” Mr Murphy said.

It will join two other contracted helicopters that can support aerial attack, where firefighters can be dropped into sites to respond rapidly to any outbreaks.

But Mr Murphy said he was confident that the fuel reduction work done by the RFS and Parks and Conservation in parks and forested areas over the past 10 years would keep the ACT prepared for fire.

Mr Murphy urged the community to support the RFS by doing its bit to prepare by downloading a Bushfire Survival Plan from the ESA website, fill it in and talk with family and neighbours about what to do in the event of a fire.

The Minister said all Canberrans should ensure they understood the Fire Danger Rating (FDR) levels to help them make decisions when travelling in and around the ACT. From 1 September 2018, the ESA will update the FDR daily, which is displayed on electronic signs on all major arterial roads across the ACT, as well as on the home page of the ESA website.

During the bushfire season, rural landowners and managers must obtain a free permit from the ACT Rural Fire Service before conducting hazard reduction burns. To apply for a permit contact 6207 8609, or send an email request to rfs@act.gov.au.

To can check if you live in a Bushfire Prone Area, download information about FDR levels and bushfire warnings, and find fact sheets on preparing for the bushfire season via the ESA website www.esa.act.gov.au.

Government to contract new helicopter ahead of the 2019 bushfire season

@The_RiotACT @The_RiotACT
On The Campaign Trail today, the Libs commit to cut elective surgery waiting times, Labor backs new schools, Pollard pumps for sport in Gungahlin, and the Federation Party wants the Port of Eden to become the Port for Canberra https://t.co/8FOvDV2Uhx (10 minutes ago)