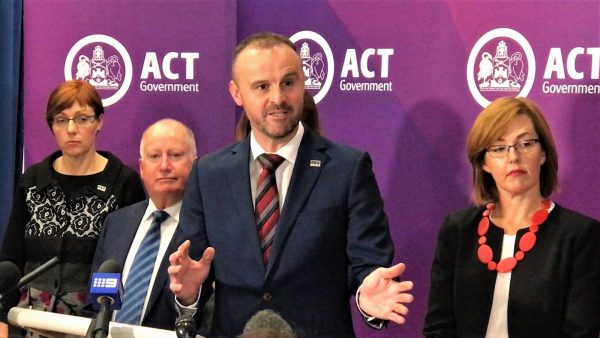 The ACT’s booming economy and low unemployment has won it an upgraded credit rating from rating agency Standard and Poor’s (S&P).

Chief Minister and Treasurer Andrew Barr said the upgrade to AAA with a stable outlook was the highest possible rating for any state and territory government and was another strong endorsement from the ratings agency.

He said the ACT had weathered years of Federal Government cuts to the Australian Public Service as well as the threat of losing jobs to the regions as part of the Commonwealth’s decentralisation push.

“Canberra currently has the lowest unemployment rate in the country and our Territory Budget has returned to surplus,” Mr Barr said.

“The strength of our economy has led to record job creation, with more jobs outside of the Federal public service in areas including tertiary education, research, IT and our booming hospitality and tourism industries.”

The ACT is also experiencing a construction boom, driven by the development of the light rail corridor and the densification of the town centres where high-rise apartment buildings are multiplying.

Mr Barr said that over the 12 months to August 2018, 2,100 new jobs had been created in the capital, attributing this to stable government.

He said the S&P rating was a strong testament to the ACT Government’s economic and fiscal management.

“According to S&P, the ratings ‘continue to be underpinned by the ACT’s strong financial management, high-income economy, and exceptional liquidity’,” Mr Barr said.

“The stable outlook reflects our expectation that the ACT government will continue to deliver on its priorities broadly within budget, while maintaining high liquidity coverage and containing its debt burden at a manageable level.

“The ACT Government will continue to deliver the services and infrastructure our growing city needs, while managing a strong economy to protect local jobs.”

Dee Kaden - 28 minutes ago
That could almost be 5,400 homeless off the streets!!! View
Slim Hunter - 2 hours ago
Natives or weeds that require watering?🤔 View
Lifestyle 24

Jim Webb - 32 minutes ago
Looking forward when it reopens. 2019 image View
Di Green - 1 hour ago
I so enjoy these gardens View
Vee Bee - 4 hours ago
We miss it so much :( View
Community 32

Chris Davis - 34 minutes ago
Hope they check out how Narooma runs it View
Steph Hamleed - 48 minutes ago
Melanie Leedham bring the kids to this View
Acton - 1 hour ago
In 1992, a shipping container of 28,000 rubber ducks fell overboard on its way from Hong Kong to the United States. Carried b... View
News 17

Sam Oak - 47 minutes ago
Wrong, even with no restrictions the death toll from covid would still be less than the flu. That’s because people naturall... View
MERC600 - 1 hour ago
Well had a quick look at this, a heap of possible dates and possible openings and possible closings ( if it goes backwards ).... View
Capital Retro - 1 hour ago
Facts have nothing to do with politics. View
Opinion 45

@The_RiotACT @The_RiotACT
Got an incredible idea for a #startup that will change the world? The @CBR_IN and @MeyerVandenberg say getting legal advice early can save you a whole lot of pain down the track https://t.co/P9C9WvzEpN (52 minutes ago)