After a two-year break, the Australian Dragon Boating Championships – the ‘AusChamps’ – are set to make a splash in Adelaide this year.

The ACT team is one of the representative teams that will compete in the races from 5 to 10 April.

Each state will go head to head in various races to claim a win in the premier division at the 2022 AusChamps.

ACT dragon boating team head coach Tom Wicks said the 28-strong team would bring a mix of experience and skill to the water.

“The majority of the team has raced with the ACT before and we have some paddlers who have even represented Australia, but we also have a couple of paddlers who will be heading to AusChamps for the first time,” he said.

“This year we are taking a women’s and men’s team, which will also combine to race as a mixed team.

Team captain Tom Wicks said the team had been training hard to prepare for the 2022 AusChamps in Adelaide next month. Photo: Tom Wicks.

Wicks said the ACT Championships would feature 11 dragon boating clubs across the ACT.

“The great thing about dragon boating in Canberra is that all local clubs train out of the same location and at similar times so most people know each other.”

He said they race in boats with either 10 or 20 people.

“The team is competing in the premier age group, so the ages range between 18 and 40 [on average], but we decided to go for a different approach because its open age, so we said ‘let’s select the best regardless of age’,” he said.

“Our youngest athlete who is competing turned 16 in February, and our oldest turned 74 this year, so it’s a huge range.” 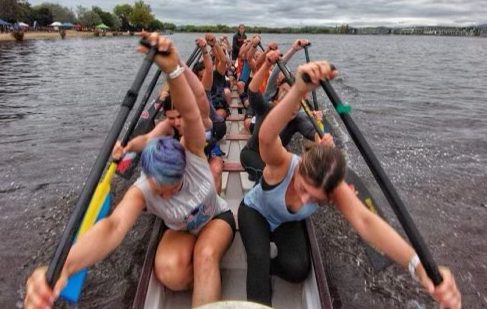 The ACT dragon boating team is training hard for the ACT Championships this weekend and the AusChamps next month. Photo: Tom Wicks.

The oldest paddler on the team, Kay Newman said she’s really looking forward to competing in the national competition in Adelaide.

“I feel quite proud of myself about being able to achieve and maintain this level of fitness, because I’ve worked hard for it, so to be recognised is really fantastic,” she said.

Newman said she has competed twice previously at the national competition in senior teams, however, this is her first time racing in the ACT representative team.

“I have actually represented the ACT a couple of times before, but this year was different because we had to go through a selection process, and I was really excited to be chosen to be on the team,” she said.

“There’s such a wide age range from under 20 to me, and I’ve just turned 74, and I really like that about the team because there’s a good camaraderie across the team.”

The youngest paddler on the team, Sophia Mills said she has been paddling for the past four years and is very excited to be going to Adelaide to compete in the Championships.

“This will be my second nationals, the first one I competed in was in Canberra in 2019,” she said.

Mills will be paddling with Club Komodo, as well as representing the ACT.

“One of the really exciting things about this sport is that it gives me the opportunity to compete all around Australia and hopefully one day all around the world,” she said.

Wicks said the team’s goal was to do its best but were “feeling pretty good” about their chances.

“We’re training hard, the vibes are really good, everyone’s feeling great and the boats are running really well,” he said. 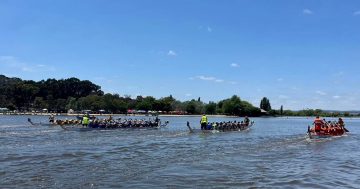 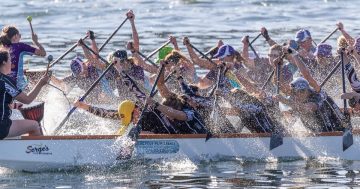