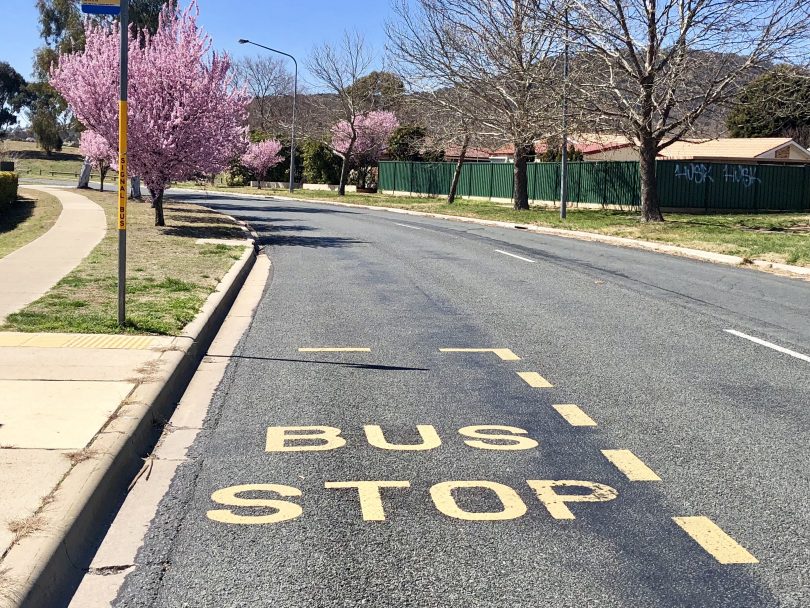 A full timetable will be finalised by Transport Canberra and will be published later in the year before the network starts in early 2019. File photo.

After backlash from parents and schools about the proposed bus route changes and the loss of most of the dedicated school bus services, the ACT Government has adjusted its plans for the new network, releasing the adjusted plans on Tuesday morning (16 October).

After receiving 13,000 pieces of feedback regarding the proposed bus service, the new network, which is set to remain in place for the next five years, includes 37 changes across 58 routes and an additional 78 school services.

ACT Transport Minister Meegan Fitzharris said the ACT Government has already committed $43 million for the addition of 80 new buses to the network, and will also invest in new infrastructure and more customer service officers to make the public transport network more convenient for Canberrans.

“This was genuine consultation, and as a result, we have made changes to a number of routes. I acknowledge the new network will involve changes for some users, but we need to strike a balance which makes public transport as attractive as possible to all people, including both new and existing passengers,” she said.

“The new network of buses and light rail will make it easier for Canberrans to get where they want to go, offering a genuine alternative to driving, seven days a week.

“This is all about making Canberra better connected and getting more people on public transport so we can secure Canberra’s status as one of the world’s most liveable cities as our population continues to grow.”

Ms Fitzharirs said that under the updated network, almost six out of 10 Canberrans will live within walking distance of a rapid bus stop.

Ms Fitzharirs said that under the updated network, almost six out of 10 Canberrans will live within walking distance of a rapid bus stop and there will be services at least every 15 minutes along 10 Rapid transport corridors from 7 am to 7 pm Monday to Friday.

Approximately 50 schools will still have no dedicated school bus service and will instead rely on expanded local or nearby rapid services but Ms Fitzharris said there will be new Customer Service Officers to familiarise school children with using interchanges and improve signage.

“We’ve heard what parents, teachers and students have said and we will also recruit a specialist schools liaison to ensure buses continue to meet schools’ needs,” Minister Fitzharris said.

“Currently the overwhelming majority of students don’t use the bus at all to get to school, so we hope this combination of the improved regular network and school-only services will encourage more young people to start using the bus and continue to be bus users after they graduate.”

A full timetable will be finalised by Transport Canberra and will be published later in the year before the network starts in early 2019.

Explore your new bus network here, and find out if your school will be affected by the updated network here.

Tracey Matthews notice the pic in this article Gordon lol

Well to be fair it’s going to be Letty bad for the vast majority of people that catch those buses from Kambah on to Woden and beyond.

They’ve added at least 10 minutes each way to the trip.

Woden yes, beyond no.

You think people in Kambah don’t work past Woden and catch the Suburban bus that goes through their suburb?

And if they don’t, it actually makes the decision to run them through Weston Creek worse as the bus trip becomes proportionally longer in the shorter trip. People will just drive instead.

As I understand it they surveyed the people who are already using the buses. I don’t use the buses because they just do not go where I want to go. Canberra is a very sprawling city and it will be very difficult to find a solution to please everyone. I thought that the tram was going to solve all our problems.

They didn’t survey anyone. They used the data from the myway system that shows when and where people board and get off.

Though yes that only captures the travel patterns of those who use the system.

They still took Narrabundah’s bus away, even though people used it well. However, many of those using it were possibly not paying a bus fare, or not full fair (Seniors, welfare, etc, and this area has a lot of that) and so were not bringing in as much money as passengers in other areas who pay full fare. The MyWay system would show where passengers are getting on who don’t pay. Let me be cynical here and suggest this lack of revenue from the passengers might have influenced the decision to not bother with those passengers. They didn’t pay enough.

Yep I think you’re right about the My Way part, but I believe they surveyed some people directly, some people on line anonymously and others at community meetings. Total 13,000 responses.

Whilst I still have some concerns about some of the routes and design, I do feel the government has at least responded to the community and media backlash. That’s good that they have made a few improvements which should be commended.

One of the spokesman I heard said the response after the first version was unexpected. They’d never seen anything like this level of concerned feedback in Canberra before.

I think that’s because the positive words from the Minister about how much better it was all going to be, didn’t actually match what many people would experience when they looked at their individual bus situation, the closest rapid bus stop to where they live, how their School was serviced etc under the Bus proposal in detail.

I am so sick of these Labor clowns. When will they learn to listen to the people, after they get voted out?
I am definitely going to be driving my kids to and from school if the new network makes the journey worse than now. That’ll help the roads de-clutter won’t it?

So you are getting in a tissie even though you do not actually know IF THE CHANGES will make the journey worse!

I note a couple of ACT Labor pollies do catch the bus fairly frequently and the gold standard is being set by the Green’s Caroline Le Couteur who seems to catch the bus even to evening meetings across her electorate.

There still does not appear to be a service going through Calvary hospital. It is a long walk to catch a bus back to Belconnen.

I don’t object to cuts to buses for out of area private schools. If you choose a private school out of your school zone, then why should the public foot the transport bill?

?? What’s your point. Students still pay for the bus.

Russ James you think students are covering the cost of school buses??

You still have to pay to use the bus Warwick. It’s not free!

Buses were cut for all schools in our street, public and private. They have now been restored.

Kath Roach Warwick answered that one. He wrote, “You think students are covering the cost of school buses??”

Definitely some improvements to the first proposed Bus system, that is good to see!

It is worth noting that even the Minister and Transport Canberra are now admitting the previous proposal had a plethora of issues and that they provided some misleading data claims, that they have now changed on their website.

Still the Kambah route through Cooleman Court then onto to Woden remains a strange one and I heard a number of callers and textors highlighting this exact issue to ABC radio this morning. The minister denied the Kambah via Cooleman Court issue on air and said it was no longer the case, but the release of the maps showed it was still the new route (so maybe she just didn’t know, rather than her trying to mislead people).

I am looking forward to the Tuggeranong- Kambah_Cooleman Court connection and I will use it often, as will quite a few people I know. Now to turn the FRC dotted line from Cooleman Court to Belconnen into an actual service to the UC, Stromlo Forest Park, CIT, hospitals etc. Guess what? Kambah isn’t the centre of the universe!